Have you ever watched a friend or relative debate the merits of two different potential boyfriends? Ever done so yourself? Ever (gasp!) wondered if the husband you chose is the right one?

True confession time: I have done all three of those things. I’ve bitten my nails watching a friend choose between the bike messenger and the wealthy banker. I’ve let the super-handsome skydiver go to embark on 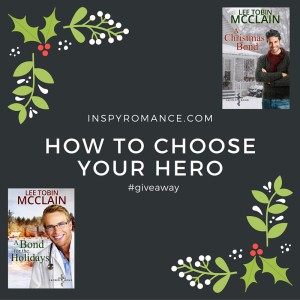 a wonderful relationship with the chubby, geeky engineer. And I’ve wondered, with some anguish, whether I was right to marry the conservative, traditional finance guy instead of the liberal, sensitive writer (I still think yes… although that marriage’s demise is a whole other story).

I guess it’s no wonder that my Sacred Bond series kicks off with a love triangle. Since readers keep asking how I came up with the premise for such a looong series, here’s a piece of the story.

What about you? Would you choose a stable doctor or a bad-boy handyman? Ever struggled with a romantic choice, or advised your daughter or sister about one? Comment TODAY for a chance to win a $10 Amazon gift card. Maybe you’ll use it to buy the two Christmas-themed boxed sets I’m in this year. John’s story, A Christmas Bond, is in Home for Christmas, and Robert and Emily’s story, A Bond for the Holidays, is in Love’s Gift. Both collections feature wonderful authors and faith-filled stories to lift your spirits… and each set is only 99 cents. It’s our Christmas gift to you, our readers.