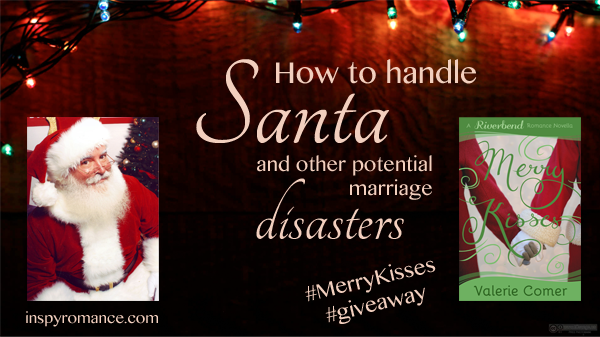 Hands up if you and your significant other discussed Santa’s role in your family before your wedding day. How about whether or not your children would participate in trick or treating for Halloween? If your hand is up, how did the topic arise? I’m guessing it was because you came across a Santa display in a mall, or were invited to a costume party on October 31.

How To Handle Santa… & Other Potential Marriage Disasters by @ValerieComer #giveaway

I know I was plenty shocked to discover that my husband — whom I’d vowed to love, honor, and cherish — was all over both celebrations, neither of which I’d participated in growing up as a good little Mennonite girl. And yes, his parents were Christians who loved the Lord. I couldn’t believe it. Weren’t Christians agreed on these topics?

Apparently not. And while I won on the Santa front (our kids never believed Santa brought them gifts), I found my children dressed up on October 31 wandering the neighborhood with their dad, who mainly wanted his share of their candy. No witches, goblins, or ghouls… but also not the lines I’d grown up with.

Ideally, couples would have these discussions before saying, “I do,” but not everyone does. What do you do when you discover your beloved doesn’t share your obviously morally correct stance?

1. Pray. If you’re married to a believer, you and your spouse want the same thing ultimately: to raise your kids in a godly manner.

2. Read Scripture. Is there anything specific in the Bible that says, “This is wrong because…”?

3. Talk. Take one topic at a time, and look at it historically and culturally. How did the custom(s) start? What did it mean then? What does it mean now? What message does participation send, and to whom?

In Merry Kisses, Sonya Simmons chafes at the commercialization of Christmas. She works in a toy store and sees the massive credit card bills some folks incur for gifts for their children. And she came from a family that had kept a very tight focus on the Christ Child in their celebrations.

Enter Heath Collins, a mall Santa, who represents everything that is wrong about Christmas, at least in Sonya’s eyes. How can he profess to be a Christian while sitting in that gaudy North Pole display in the mall, listening to children demand more and bigger toys?

This was an interesting story conundrum to me, and I wasn’t exactly sure how it would play out while I was writing. Merry Kisses is the final story in the Riverbend novella series, so I pulled in two little girls from an earlier story. In Pinky Promise, single parents Kelly and Ian are pushed together by their daughters who share a birthday and tell everyone they are twins. Because Pinky Promise took place in spring, it seemed reasonable to me that Kelly and Ian might not have thoroughly discussed the ramifications of Santa before tying the knot. And two daughters age seven-and-a-half seemed to set the stage for drastically different Christmas traditions.

So Sonya found a friend in Kelly in Merry Kisses, and we all (me included!) got some lessons in balancing out expectations for Santa and other Christmas issues. Halloween didn’t come up in this series. Maybe some other time!

Do you and your #Christian spouse agree on #Santa in #Christmas? #giveaway MERRY KISSES 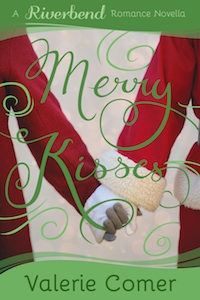 In comments below, please do NOT fight for your opinion on whether Santa is okay for Christians or not. I opened that kettle of worms on my Facebook wall while writing Merry Kisses, and tempers ran high. Let’s not go there. I’ll delete antagonistic comments if I have to.

Instead, let’s talk about the process of coming to agreement with our spouses on issues like this. What have been big controversies in your marriage or family? How have they been handled? How could they have been handled better?

Comment before November 7 for a chance to win a digital copy of Merry Kisses. I’ll draw one name at random, and the winner will be announced in the Sunday Edition November 8. Be sure to check back to see if your name was drawn!