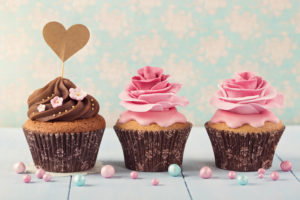 Anyway, back to those sweet mounds of deliciousness.

The thing about cupcakes is — I tend to be kinda picky. I’m not a huge, huge fan of those cupcakes that are like, here is your ginormous mount of frosting that is about to crush this itty-bitty chunk of cake. I mean, they are pretty and all and I ohhh and ahh over them and I WILL eat them, but they aren’t my favorite.

The other day, I went into a cupcake shop (I really don’t go often — although my waistline tells a different story!) Anyway, I went into the shop and they had– wait for it — CHEESECAKE cupcakes. I stood there drooling for a few minutes. Now, I wouldn’t want something that rich and decadent all the time, but a once in a while treat sounded AMAZING!!

My FAVORITE cupcake, though, is a little bit of a mix. I want a TON of cake because I love the moist fluffy stuff. It is my favorite part of a cupcake! But a delicious frosting is a MUST (just not so much that it threatens to topple the whole cake!) What would make it one step even better, though? A surprise filling in the middle — ohhhh, maybe even a bit of that cheesecake baked inside! #swoon

Okay, now that you all hate me for making you crave cupcakes today….

How does this relate to books?

For some reason, I thought about a cupcake.

My books are like that last cupcake. They are moist and fluffy on the outside (HUMOR!) but they aren’t all fluff. They have a rich, deep, creamy center that steps it up a notch. My characters have been former foster care children, former abused women, a woman who has insane fears due to being abducted as a child (this one is unpublished… maybe someday…), and men who deal with work-a-hol-ism, a man who has trend away from God as a teen after his sister died… just to name a few. They struggle with deep issues–(aka cheesecake…) But they are the center of the story… the filling… and are nestled around that fun outer layer.

And of course they all have a romantic frosting that isn’t too much but isn’t too little, just the right amount!

So see? My book as a cupcake!

(the college students ate up my cupcake analogy…. see what I did there?!?)

I thought it’d be fun today to share YOUR cupcake books. If the book you are currently reading were a cupcake, what kind would it be and why? And what kind are your FAVORITE book-cupcakes?