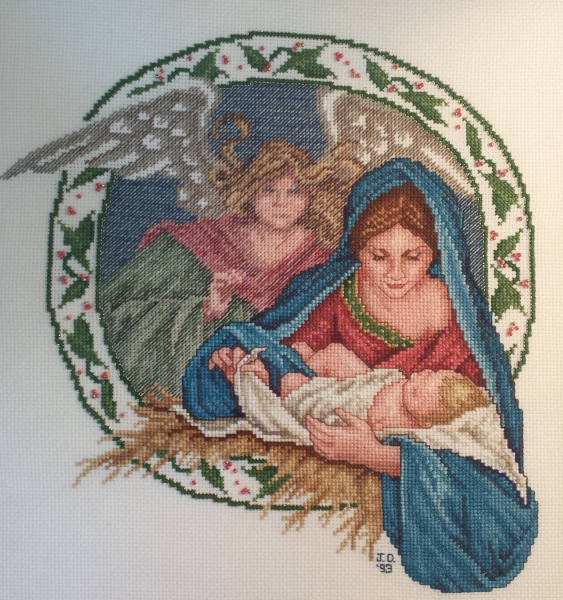 In the early 1990s, we moved from California to a suburb of Philadelphia, Pennsylvania, where my husband, Jim, served as an associate pastor for youth/music/worship. This was during the six-year period when I was a stay-at-home mom with three small children. When I wasn’t with the kids, or writing, or working with Jim and the youth group, I also dabbled in cross-stitch needlework projects, and I thought–for fun–I’d share a couple of them with you (stay tuned for a personal Christmas  *miracle* story below). Some people found it difficult to believe, but working with my hands with such intricate work actually helped me to relax. The Christmas project shown on the left is one I worked on when I was expecting our second child, Chelsea, and I recall laboring over it in the sweltering humidity of a church camp where Jim was the worship and music leader at Lake Erie Bible Camp. It was my most ambitious project ever with interwoven gold filigree embroidery floss and even red and gold seed beads.

The cross-stitch picture of the angel shown to the below right was the last project I completed. I was pregnant with our son, Matthew, at the time (he’s now 18, and do you see a running theme here with being pregnant when I worked on these Christmas projects?). I joke and say the black background of the canvas “did me in,” but after that, the writing and other aspects of my life took precedence. But for a time in my life, my needlework was “me time” in the midst of the busyness of life. I spent many enjoyable hours working with those cross-stitch canvases. Now, most of my needlework has been stored away, but these two Christmas projects are framed and hang year-round in our home. 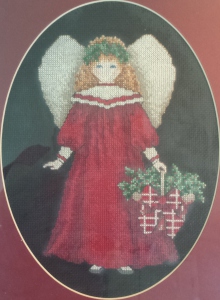 The quality of the photographs is not the best, and I apologize for that. However,  I assure you, the colors of these pieces are as vibrant and rich as ever.

This was also the time when I first began writing full-length novels, and it never entered my mind to write anything other than Christian romance.

I’d like to share with you one of my favorite personal stories of Christmas. If you’ve read it before, my apologies, but I believe it’s a story that bears repeating, and it’s near and dear to my heart. One Christmas during our Philly years, heavy snow was predicted for Christmas Eve, but that didn’t stop our excitement as we packed up the minivan and headed on our way to Grandma’s house in my native southern Indiana (where we now live), across the Ohio River from Louisville, Kentucky. Stops included, driving straight through, we anticipated it would take about 12 to 14 hours.

The further we drove, however, the more treacherous the highway became. Trucks were skidding and sliding into ditches and guard rails, the roads were winding and narrow, and there were numerous fender benders and stalled cars everywhere. Did that stop the Durgins? No way! We were singing and happy as could be, and nothing could stop us. At one point, I started to get a little apprehensive because of the blinding snow and icy road conditions. I remember giving Jim one of those looks and mouthing to him so the kids wouldn’t hear, “Do you think we should pull over and stop?” His response was to grip the steering wheel that much harder with fierce determination.

Our rumbling tummies finally forced us stop at a truck stop (still in Pennsylvania; it’s a really long state). The warmth inside and the smells of a holiday buffet greeted us as we walked through the door. We knew we couldn’t stay long and needed to keep moving if we had a prayer to get to our destination before Christmas. As it was, we’d been delayed by creeping along at speeds of less than 20 miles per hour for seemingly hours on end.

This is where it gets pretty wonderful. Our waitress came to our table with a radiant smile. Her name? Angel. She was sweet and as friendly as could be in spite of being hectic and busy with a number of customers. When Jim went to pay the bill, the cashier said, “Already taken care of. Merry Christmas.” We’ll never know who paid for our meal, but it was one of those random acts of kindness we’ll never forget. 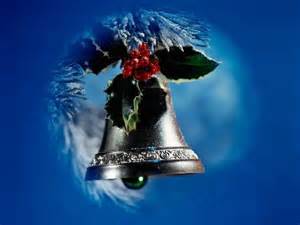 Now, for the part that always makes my eyes mist all these years later. When we walked outside to our van, we discovered a man—who’d been sitting at the counter when we walked in (and greeted the kids with candy canes and a warm smile)—had been hard at work shoveling around our van in order to make sure we’d be able to get out of the parking lot. The man told us his name was Chris (or was it Kris?). In a red plaid flannel shirt with jeans and a heavy overcoat, he had a long white beard, thick hair to match, wire frame glasses and yes, I’m pretty certain there was a merry twinkle in those eyes! In case you think this is a case of an overactive writer’s imagination, I wasn’t on any kind of medication, I have witnesses (Jim and the three kids), and we all share this same marvelous memory. The snow was falling and accumulating faster than I’d ever seen it. Spying a small motel a few miles down the highway, I exchanged a glance with Jim. He raised his brows and I shrugged. Then we both looked at each other a few seconds later and he said, “Indiana or bust.”

Nearly 18 hours after we started out, we finally made it to Indiana, and never was it so warm and welcoming. But the story’s not quite over yet… Jim had a mechanical problem with the van the day after Christmas, and he took the van to my mom’s mechanic (a lookalike for Larry Bird, a fact which thrilled my Celtics fanatic of a husband). Know what the mechanic said? “I don’t know how you made it that far, especially in the bad weather. This van should have broken down somewhere along the way.”  I remember stopping somewhere in Ohio and filling a tire with air, but wow. I mean Wow! The Lord’s constant watch care and protection for us is amazing and awesome, isn’t it?

I write about the tiny town of Starlight, Iowa, in my Starlight Christmas Series. A wonderful place to call home, and full of fun, quirky characters, love, faith and family. Below is a short excerpt from Sleigh Ride Together with You, the third and final installment of the series (following Meet Me Under the Mistletoe and Starlight, Star Bright although they can certainly be read independently of the other). Here, Nicole Reardon, a morning show anchor of Wake Up, Des Moines! is speaking with Alex Kingsfield, a network executive sent to evaluate Nicole’s potential to move to a position in a bigger market. After she receives an unexpected weekend assignment to Starlight, Nicole is attempting to explain the charm of Starlight to Alex:

Nicole glanced up at him, deep emotion in her eyes. “What’s happening between us, Alex?”
That was the question of the moment, the hour, the day, his lifetime. “I’m not sure. All I know is, I can’t stop thinking about you.”
“I know. I feel the same way about you.” She shook her head. “But it doesn’t change the fact that this—whatever it is between us—can’t continue.”
He frowned. “What do you mean?”
“Maybe you shouldn’t go to Starlight with me. I can get one of the camera guys. That’s what I’m saying.”
Frustration rose to the surface. “Now you’re talking crazy, Nicole. Why not?”
“Well, for one thing—and trust me, I feel silly enough even saying this—people have a tendency to fall in love in Starlight. Maybe it’s in the water or something. Or maybe in the proverbial stars. No, I know better. It’s God. He’s everywhere in Starlight—in a special way—and you can’t help but feel His love.” She raised her hands in frustration. “It’s like this warm, cozy blanket of love that covers everyone and everything in that town.”
Alex stepped closer. “And that’s such a bad thing?” 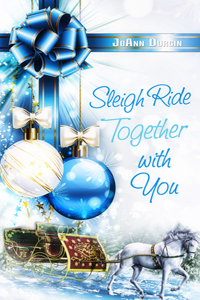 Psalm 46:1: God is our refuge and strength, A very present help in trouble.

Isaiah 41:10: Do not fear, for I am with you; Do not anxiously look about you, for I am your God. I will strengthen you, surely I will help you, Surely I will uphold you with My righteous right hand.

Blessings during this most special season of the year, friends.