Let me be honest up-front. I don’t do deadlines.

I’ve known this about myself for… well, my whole writing “career.”

The thing is, I’m a journalist by trade, so you would think that deadlines would come naturally to me. Oh, how I remember the nights at the paper when I was a campus reporter, pounding out 16-inches of copy because they were going to put the paper “to bed” in 20 minutes, and there was no other choice.

I much prefer to have whatever it is FINISHED well before whatever “deadline” is imposed.

So why did I not have my last series finished before I published the first one last May?

Okay, in my defense, when I put “Mirror Mirror” up for pre-order in February, a year seemed doable to finish the very last book in the series.  I only had one more to write. I should be safe. Or so I thought.

So I put that one out and started writing on the fourth book—Raising Attabury.

It quickly became apparent that Attabury was not going to cooperate. For one thing, there was no way I could just start on Eric and Dani’s story without filling in some major plot points of how we got from Book 3 to Attabury.

Doggedly because I had a deadline, I kept at it, figuring I would just do a short “prologue” about what happened in the between time and move on. Yeah. That didn’t work like I thought it would.

218 pages later… I finally got to Eric and Dani’s story.  And it was OCTOBER!

Now, that wasn’t my fault.

In the meantime, I had written two other books I had not planned to write at all!

So, here we are in October with what amounted to a novel of prologue story, and I had just started Attabury. Turns out, I put the bridge book out as “A Moment Like This” in December and all seemed back on track.  Except I did not have Attabury finished.

Here is the place I’m saying, “I’m never doing that again!” Because as I was writing Attabury, I was also:

* Running to basketball games two and three times a week with middle daughter. Senior year, don’t you know. I couldn’t miss one!

* Going to band concerts, choir concerts, open house, and every other thing the school came up with for both kids.

* Oh, did I mention Christmas, New Years, and helping with two retreats?

So the February deadline that looked so doable last year, suddenly got to be a much bigger challenge than I had anticipated.

There’s a part of me that always wonders if God kind of does this on purpose just so I know for SURE AND CERTAIN that I did not do it!  Then I go back and read Attabury, and I KNOW I did not do it!

Not saying I won’t follow God’s lead from here on out because believe me, God’s way works, my way doesn’t.  But I’m really, really hoping I never have to do that again because I was definitely not cut out to write that way!

I do hope, my readers enjoy God’s story… because one thing’s for sure, I know I didn’t write that one!  And with that said, I now release “Raising Attabury.” 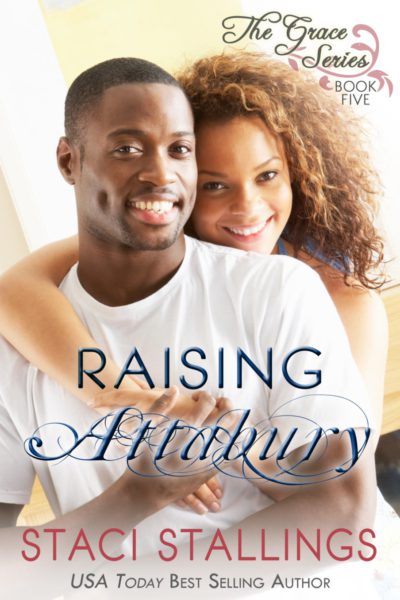