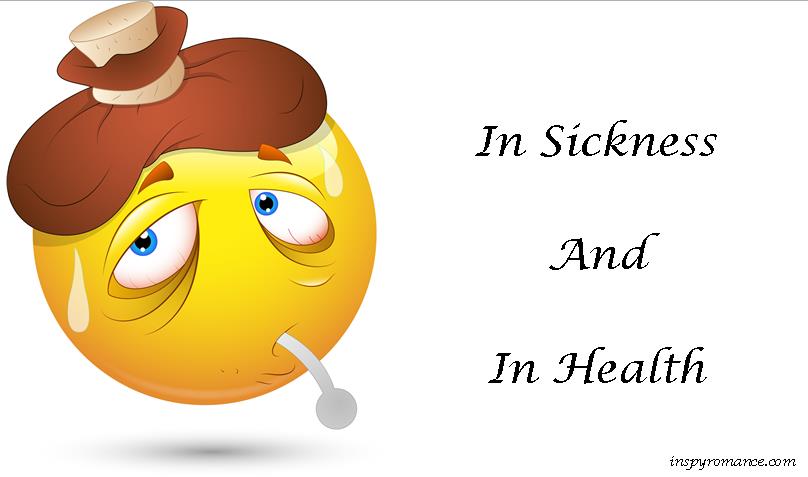 We think about them, contemplate what they mean, but most of us tend to think toward the “richer” and “health” and “better” portions of those vows.

The reality is, even if we never go through life altering illnesses or reversals of financial fortune, we still hit hard times.

Or they hit us.

That’s how I felt this weekend.

If you read the Sunday Editions, you know I usually write them, and I usually write them on Saturday nights. This past Saturday, I didn’t feel great, but it wasn’t nearly as bad as it was going to get. By the time I woke up Sunday, I was running about 101.5F but was chilled to the bone. Monday I went to the doctor, who confirmed what I already knew. Strep throat.

I got to spend all day on Mother’s Day sleeping.

(Hey! I’m trying to be glass half full here!)

While I whimpered in pain as the elephant stepped on my leg. Except it wasn’t an elephant. It was my 5lb Shorkie :p.

But when I get sick, whether it’s a nasty bout of strep or skin cancer followed by Bell’s Palsy or a kid who needs Mom, my husband becomes “Jesus with skin on.”

This weekend, he didn’t complain when dinner wasn’t cleaned up when he got home on Saturday (it was his long-standing monthly game night with friends). He took care of all four kids all day on Sunday when I emerged from our room for a grand total of fifteen minutes combined. He took the 7yo to his first baseball game last night (I’m bummed I missed that :(). He’s with the 11yo at her first softball game this evening (bummed I missed that too :() and done far more than his fair share of listening to the whine coming from both me and the kids when they get overtired. 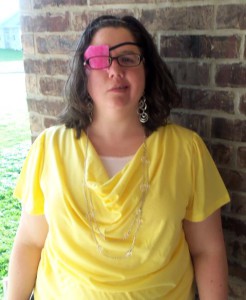 Me. With my eye patch. On my way to church on Easter Sunday.

Three years ago, I was diagnosed with basal cell carcinoma – pretty much the least bad cancer ever – but it was right on my nose. It took two surgeries (five days apart) to fix it. The closure took over 50 stitches. I was on narcotics for nearly two weeks. He took care of everything during those rough weeks – from the kids to taking me to surgeries and follow ups and listening to me say (over and over and over) that my eyelids were numb after the second surgery (I don’t know why I was so fascinated by it; I was still coming out of the anesthesia!). That was late January/early February. Easter was in March that year. On Good Friday, I woke up with only half my face working… It’s amazing how exhausted you feel when half your face doesn’t work :p. He stepped up big time then too.

Almost eight years ago, our youngest was born a month early. He didn’t have any preemie issues, but the valve between his esophagus and stomach didn’t work right. Feeding him took about 90 minutes, every 3 hours. Oy! And he was nursing so it fell mostly to me. He had surgery at 4 months to fix it and that helped, except he couldn’t burp for a couple months. Then as that resolved, he went through a stretch where he NEVER went more than two hours between eating. By then it only took about half an hour to feed him, but he ate every 90-120 minutes around the clock. That meant, I never slept more than 90 minutes at a time, TOPS. That went on for about 2 months. I was barely functional. A successful day meant everyone was alive at bedtime. They may have had Froot Loops for breakfast, lunch, and dinner, but no one stayed in a stinky diaper too long.

Those are the times when someone’s true character comes out. My husband was so worried about me during that time. In my efforts to let him get the sleep he needed (working two jobs), he had no idea how often our son was eating overnight. Every night. Once he did, he made sure to help more when he could. I don’t mean to imply he wasn’t already shouldering more than his load, but once he knew how little sleep I was getting, he made that a priority, too.

And turnabout’s fair play. The week after our son had that surgery, I was sleeping on the couch because I needed to feed him so often still. My husband crawled out of our room in agony. For the next two weeks, I took care of both of them as he waited for a kidney stone that wouldn’t pass. I’ve taken him to the ER past midnight because we were concerned about a concussion. And so on. 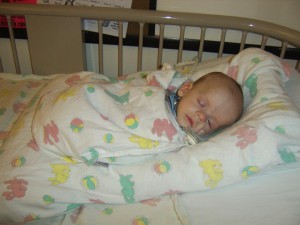 Our son in the hospital while we decided what the best course of action would be.

It’s part of being in a relationship. It’s part of the “in sickness” part of those vows. We’ve never been through the major struggles – like my dad when my mom fought then died of cancer. Or the couple at my church when the husband fell off a ladder and has been in a wheelchair ever since. Or the wife who has a slow debilitating disease and needs him to care for her. Or my high school friends who had two children – one of whom barely passed her first birthday before meeting Jesus – and the other who still, at nearly 15, still has the same disorder and will never “grow up”, never “be normal.” (A year or so later they had a third child – a wonderful girl who, at eleven or so, dotes on her older brother.)

All of these are the things that test a relationship to it’s limit.

One of my high school teachers always said he believed couples should date for at least a year because it’s very likely you’ll go through at least one fairly major incident. Knowing how that potential spouse reacts when the chips are down is a huge part of knowing whether that person is the right one for you or not.

What about you? Do you have that one person – or several – in your life who’s there for you no matter what? If you’re married, I pray your spouse is one of those people. If not, I pray you have those friends or family members who can step up.

That basal cell cancer thing played a role in my first novel, Finding Mr. Write. In fact, most of the six novels I have out deal with at least one minor-to-semi-major medical crisis. And that Bell’s Palsy thing is going to come into play, probably this fall. One lucky commenter will get a Kindle copy of their choice of my novels.

Oh – and my personal health has been upgrade from “Mac truck” to “high-speed sideswipe by an F350” ;).