Narelle here. I’m delighted to welcome my Aussie friend, Andrea Grigg, to our blog today. Andrea is giving away an ebook copy of her August release, Too Pretty, to one lucky reader. 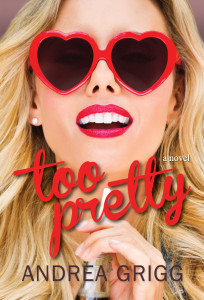 Frustrated by a long string of empty relationships, Ellie makes a promise to God not to date for six months, a promise she’s determined to keep.

Tired of being continually misjudged because of her looks Ellie moves to Sydney for a fresh start. But when her path keeps crossing with the darkly handsome Nathaniel, that promise becomes much harder to fulfil.

As they battle with their attraction for each other, Ellie is not the only one to discover it takes more than simply looking in a mirror to find out who you truly are …

Could it be that God has a bigger plan? Could this really be one of those matches made in heaven …?

Narelle: I really like the premise for Too Pretty. Two years ago Andrea and I chatted at a writing conference about her ideas for Too Pretty, and I’m so excited to see the story in print. Andrea, please share with us your inspiration for Too Pretty.

Andrea: Strangely enough, the idea came while I was cleaning the bathroom (!) and it just wouldn’t go away. The more I thought about it, the more I liked it. I’d never read a book that dwelt on the problems of being outrageously attractive. (It took a ton of imagination, believe me!) I spoke to a couple of ladies about the idea and they were thrilled. They each knew of a stunningly beautiful Christian girl who encountered the same problems I’d mentioned and were very glad the subject was being written about. That really spurred me on!

Narelle: I love your book cover for Too Pretty. It’s memorable and makes a bold statement. Were you involved in the cover design process?

Andrea: I love it too! And yes, I was involved.

My daughter is a graphic designer and my publisher (the wonderful Rochelle Manners at Rhiza Press) has allowed her to design both my covers. I particularly love the one for Too Pretty.

Interestingly enough, when I showed a few people the draft, they said, ‘I like it but isn’t the girl too sexy for a Christian book?’ Ironic, as those kinds of remarks are exactly what poor Ellie has to contend with. It’s the perfect cover. :)

Narelle: Do you have any thoughts on what makes Australian contemporary romance different or unique?

Andrea: Apart from the obvious answer ie. setting, Aussies have their own unique voice. I love our sayings and colloquialisms – they set us apart! Having said that, I don’t think we’re so different so as to need a glossary in the back of our books – I hope. :)

Narelle: We often talk about heroes on Inspy Romance. Can you give us the scoop on Nathaniel, and share why you believe our readers will want to fall in love with him?

Andrea: Ah, the handsome and secretive Nathaniel. A hard-working and generous man, he’s been burnt in the relationship stakes, misunderstood by his family (except for his grandmother) and just wants to get on with his life. Alone. It’s better that way because love makes you vulnerable and he’s not going there again. Ever. What’s not to love? 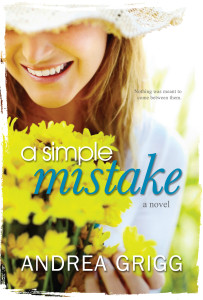 Narelle: Too Pretty is your second book. Can you tell us a little bit about your debut book, A Simple Mistake?

Andrea: A Simple Mistake is the story of Lainey and Nick, high school sweethearts who reunite after a decade apart. Nick is now a famous celebrity and Lainey is the girl he left behind.

After discovering what kept them apart, they tentatively rekindle their romance. The feelings are as strong as before but Nick’s lack of faith may become a problem for Lainey. And she has a secret, one that may destroy their new relationship, if she can bring herself to tell him …

Narelle: What’s coming up next from Andrea Grigg? Do you have any upcoming releases scheduled? What are you working on now?

Andrea: My biggest problem is deciding on which book to finish next. I have several on the go and they’re all tugging at my heart. The Simple Truth, the sequel to A Simple Mistake, definitely needs to be written. But so does the story about Sophie, bullied mercilessly in high school by Will, now a washed up footy star. He’s quite different to how he used to be. In fact he even seems nice. Very nice. And Sophie’s different now too. Like 40kgs different. Will he even recognise her? And what will she do if he does?

Or Anna, who has run away from her fiancé to a little cottage by the beach where she meets Ryan, who has just broken off his own engagement. They become close friends, but it can never be more than that because Anna is hiding something and if Ryan knew what it was, he’d want nothing to do with her. After all, Anna’s father rejected her when she was only little because of it. Why wouldn’t Ryan?

And there are others. Perhaps I should just lock myself away for a year and finish the lot! 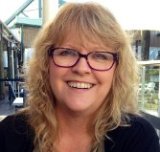 ANDREA GRIGG grew up in Auckland, New Zealand, but has lived more than half her life in Australia.

Andrea loves words, finding out what makes people tick, and romance. Her debut novel, A Simple Mistake, is a contemporary romance, and was a finalist in the Caleb Awards 2012. Her second novel, Too Pretty, was released August 2014.

Andrea lives with her husband on Queensland’s Gold Coast, where they have raised their three adult children – two daughters and a son. Recently retired from teaching ten-year-olds, if she isn’t being a domestic executive or socialising, Andrea can be found in her cave, writing stories.

Andrea, thanks for visiting with us today. To enter the drawing to win an ebook copy of Too Pretty, please complete the Rafflecopter entry below and leave a comment for Andrea on this post.