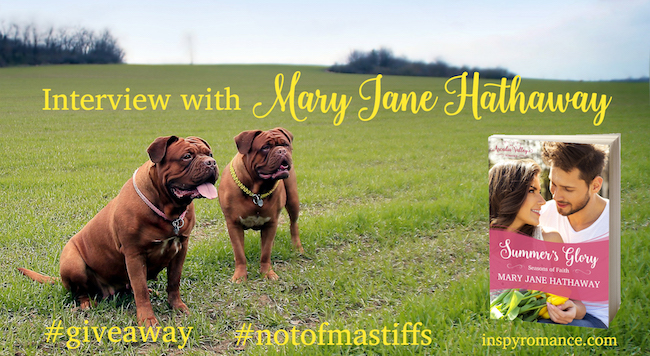 Welcome to Inspy Romance, Mary Jane! Or would you rather I called you Virginia? I know you write under Mary Jane Hathaway for contemporary romance and Virginia Carmichael for historical. (And pssst to our community here! You’ll need to read Summer’s Glory to find out why there’s a photo of two mastiffs on the blog header! There’s definitely a reason.)

Hi Valerie! Thanks so much for having me here. So, my name: My maiden name was Mary Virginia Carmichael. I’ve never been called Mary, but always called by my middle name, Virginia. That’s why one of my “pen names” is Virginia Carmichael. It actually IS my name! I have publishing credits from before I was married and when I signed my first contract, I decided to keep it as my professional name. Mary Jane Hathaway is also a family name and I used it to separate my two publishing projects, although I use Mary Jane Hathaway most these days. *whew* So, that’s the lowdown on the pen names which are not actually pen names!

Our friends here at Inspy Romance have heard all about the Arcadia Valley Romance series, and many have read Romance Grows in Arcadia Valley. The first novel in your series inside that community, Summer’s Glory, releases on Tuesday. Are you excited?

I’m SOOOO excited! I’ve gotten very used to finishing a book and having it up fairly quickly so it’s really exciting to finally see this book release when I finished writing it way back in the middle of 2016. :D

What drew you to joining the team of authors writing in Arcadia Valley?

FOOD. Okay, that may be an oversimplification, but we’re very active in the fresh food movement in our community so it made perfect sense to write a series about it.

Each author came up with a premise for her series. What’s the name of your series, and what’s it about in a general sense?

My series is called Seasons of Faith. I love writing books for Christians on all steps of their faith journey, from baby believer to seasoned saint, and my stories will reflect characters who are following in the steps of Jesus as they discover true love. 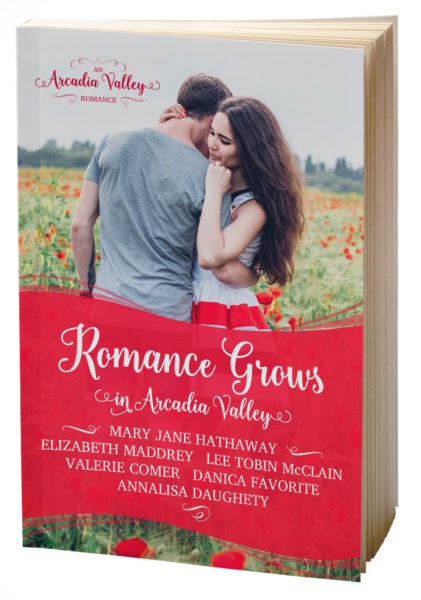 Spring’s Blessings (in Romance Grows in Arcadia Valley) is the novella prequel to your series. What’s it about, and how does it introduce the stories to come?

Spring’s Blessings is about a young woman who has always felt called to live in a rural, agricultural community and when she finally takes a job in Arcadia Valley, she thinks she’ll be able to prove she was right to everyone who thought she was crazy. Her journey is learning to find her worth in her Divine Purpose, and rather in other people’s opinions. I think it’s a lesson every Christian has to learn or they’re just not able to step out in faith.

When Charlotte meets the handsome widower next door, she immediately feels that she’s a dunce, a city slicker, a girl who doesn’t know even a fraction of what everyone else does. But Nico helps her understand that everyone has to start somewhere and that there’s no shame in being a beginner. His gentle acceptance helps her make huge strides in learning to look for her worth in God alone, and it changes her whole life. Oh! And they fall in love! :D

Tell us about Summer’s Glory! 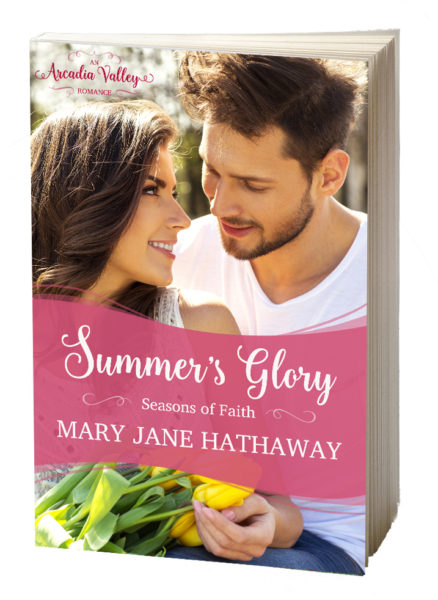 Violet Tam thinks she’s escaped the boy who made her teen years a perfect misery, but when Silas Black comes back to town, she finds herself falling for the one guy she’s always hated.

After his mother passes away, master carpenter Silas Black returned to Arcadia Valley to help his sister run their small farm. He was the town’s bad boy as a teen and it wasn’t just an image. But although the rest of Arcadia Valley has accepted that his juvenile delinquent years are behind him, there’s one woman who can’t accept that he’s really changed.

When Violet reluctantly asks him to join forces to help out a friend in need, they discover there is more to each other than meets the eye, and certainly more than who they were in high school. Silas soon realizes he’s in danger of losing his heart to the strong, intelligent middle school teacher. Add in a shocking robbery, an emergency surgery, and a surprise litter of puppies, and the two former enemies must face the possibility that true love was waiting to bloom for them all along.

Where did the idea for this novel come from? It tackles some hard subjects.

A friend of mine was telling me about her time in high school as the only Asian in the entire community besides her parents. There was one boy who made her life miserable! At the ten year high school reunion, my friend said that this boy (now a man) sought her out to apologize for all the cruel things he’d said and done. My friend struggled with whether to accept his apology because she’d carried those wounds for years and years. She prayed about it, accepted his apology, and they have since become friends. I was so touched by their story of forgiveness that I wanted to write it into a novel!

How does Summer’s Glory set up the rest of your Seasons of Faith series?

Summer’s Glory is the first full length novel of the three, but is the second in the series, so it has a lot of characters already introduced in Spring’s Blessings. All of the books focus on brothers from the Delis family and their friends, so characters that might have had a cameo appearance in the first book, will be the main characters in the next. I especially like bringing back characters from the previous book as the supporting friends because then we can see how they’re doing! My books always have lots of weddings, babies, and new beginnings.

What do your Arcadia Valley Romance books have in common with your other contemporary romance novels? Do you have any other releases in this genre coming up soon?

Let’s give away one Kindle copy of Summer’s Glory! What’s one question you’d like to ask the Inspy Romance community to answer for their chance to win?

Or if you don’t have a favorite recipe, what’s your favorite type of food? Me, I love anything fresh! Of course, whether it’s a fresh pear or a fresh cinnamon roll depends on the day. My husband does a wonderful job of growing delicious edibles on our little acre of land in a valley renowned for its long growing seasons. (I try to do my part and not burn the food when I cook it. No promises.)

I blog on the Seekerville cooking site called Yankee Belle Café. My posts run the gamut from simple heirloom tomatoes drizzled with balsamic vinegar to individual triple layer chocolate mousse cakes to fresh grilled cactus. I lived in several European countries before settling in Oregon, I have family from Croatia, and my husband is from Mexico so there is no “ethnic” label on our food. If it’s fresh, we’ll try it. And if it’s good, you bet we’re gonna eat it! I believe in enjoying all the deliciousness that this world has to offer, especially the natural foods that come right from my own backyard. I’ve been known for more than my share of kitchen fails but I haven’t been fired yet, so I’ll just keep cooking and posting whatever strikes my fancy! 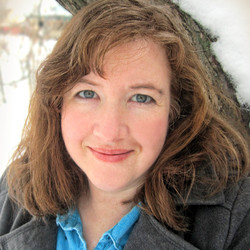 Mary Jane Hathaway is an award-nominated writer of Christian fiction and a home schooling mom of six young children who rarely wear shoes. She holds degrees in Linguistics and Religious Studies from the University of Oregon and lives with her habanero-eating husband, Crusberto, who is her polar opposite in all things except faith. They’ve learned to speak in short-hand code and look forward to the day they can actually finish a sentence. In the meantime, Virginia thanks God for the laughter and abundance of hugs that fill her day as she plots her next book. She also writes under the pen name of Virginia Carmichael and loves to meet readers on her facebook page of Mary Jane Hathaway or at her personal blog, The Things That Last.

A Half Made Whole
Finding Home 1 by K Leah