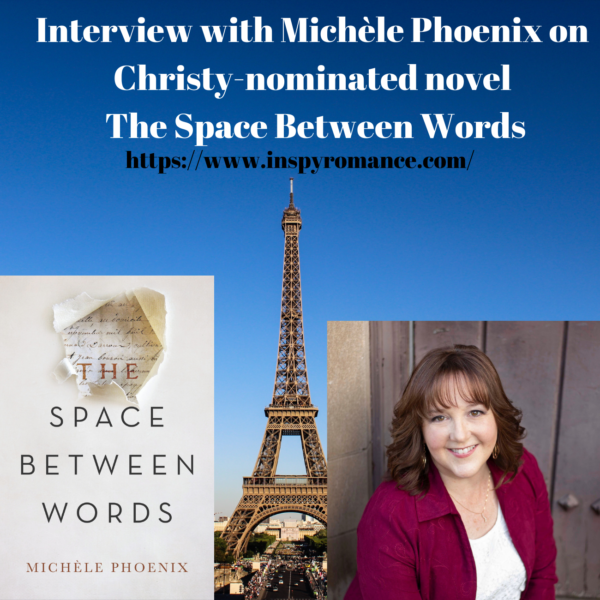 Today, I’m excited to interview author Michèle Phoenix who has twice been a Christy award finalist! I loved her novel, The Space Between Words, which placed in the awards last year. My local book club enjoyed it too! Michèle was kind enough to help me with research about overseas mission for the novel I’m currently writing (Star Rising), as well. So, I thought I’d share her with our Inspy readers!

I loved the setting of The Space Between Words. Tell us about researching in France and England for this novel. I think I read you and a friend traveled around as your deadline approached?

Writing The Space Between Words, my second novel with Thomas Nelson, was a combination of determination, inspiration, desperation and happenstance. I’d holed up for a couple of weeks in the small town where I grew up, on the outskirts of Paris, hoping the proximity to my French roots would inspire me enough to meet my publisher’s deadline. On my first attempt, I feverishly wrote 136 pages, then came to the conclusion that the fraught, unoriginal story was not worth publishing. So I clicked delete and steeped in disappointment for a few days. (Granted, disappointment goes down easier with a steady diet of French pastries!)

A week later, after hearing a comedian say, “History is psychotherapy for the entire human race,” I found a new direction for my endeavor and set to work trying to find connective tissue between periods of France’s past and the terrorist attack on the Bataclan from which Paris was still reeling at the time. The plight of Huguenot Protestants, centuries ago, emerged from that research, offering a historical backbone to the contemporary story.

A few days later, my mom joined me in London for a previously planned vacation together and wasn’t in the least perturbed to learn that our itinerary was about to be sabotaged by a hunt for Huguenot relics.

We were as clueless as my characters Jess and Grant as we set off on our adventure—following Google-search results across southern England—and just as surprised by the serendipities that led us from discovery to discovery. In the small town of Sandhurst, Kent, on the wall of a tiny Baptist church, we found a page torn from a centuries-old French Bible that had been handed over under perplexing circumstances. It would become the driving force behind the narrative of The Space Between Words.

Perhaps my favorite part of our literary treasure hunt was our last stop—an abandoned Huguenot silk mill in the remote, thatch-roofed village of Holford, Somerset. When we finally located it, we found our efforts thwarted by the “No Trespassing” signs placarding a gate beyond which the ruins lay out of sight. My seventy-seven-year-old mother didn’t hesitate for a moment. I watched a bit nervously as she climbed over the rain-slicked fence with surprising agility and disappeared down an overgrown path. We spent a long time in the peaceful glen that afternoon, exploring the remnants of the old silk mill believed to have belonged to Huguenot refugees.

These startling and galvanizing magical moments, along with several others, coalesced into The Space Between Words, the tale of one woman’s healing from the horrors of terrorism.

So amazing how it all came together! What’s the take away spiritual message from The Space Between Words?

Though this world can be a daunting and dangerous place, God isn’t content to sit back and watch violence and human perversion win. He is constantly at work layering Good over evil, covering darkness with Light—telling humanity in his roaring-calm voice that no matter the nature of our destructive endeavors, he will not, in the end, let the nefarious overcome the righteous. He is near, engaged and full of compassion.

You let me pick your brain for my novel in the works because of your ministry. Tell us a little about what you do there.

I’m fortunate enough to have a full-time ministry focused on Missionaries’ Kids (MKs). My goal is to use my platform to enlighten the broader Christian world about the needs, strengths and struggles of this often-overlooked people group in order for missions to do better, parents to know better and MKs to live better. The work takes many forms: speaking, training, writing, consulting, creating new resources, teaching at Reentry Seminars and interacting daily with missionaries and their families. As an MK myself, I absolutely love the ministry to which God has called me!

What’s in the works for you next?

I have a third book coming out with Thomas Nelson in 2020. It’s all pretty secretive at present, but I cannot wait to start promoting it! I’ll just mention for now that it has a strong WWII component and a contemporary mystery/adventure element. The love story between the two protagonists is unlike anything I’ve written before. I hope my readers will find it as fascinating as I did.

Oh I can’t wait!! How can readers keep up with you? 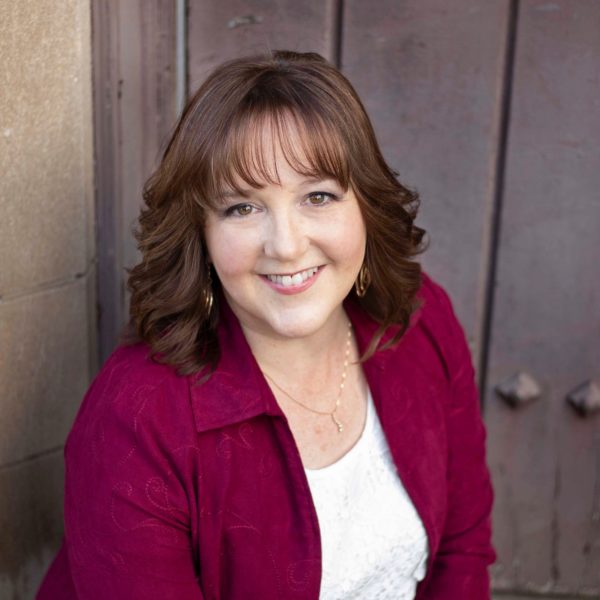 Born in France to a Canadian father and an American mother, Michèle is an international writer and speaker. She left teaching after twenty years at an American high school in Germany to become an advocate for Third Culture Kids. In this capacity, she travels globally to consult and teach on topics related to this unique people group. Michèle is a three-time cancer survivor who understands the gift in every breath and milestone. She is inspired by good conversation, investigative travel and paths to healing. 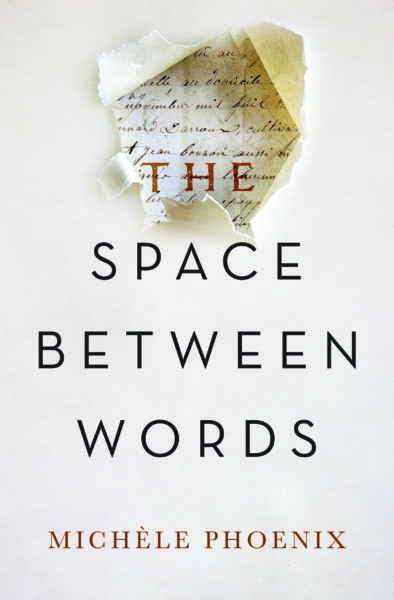 When Jessica regains consciousness in a French hospital on the day after the Paris attacks, all she can think of is fleeing the site of the horror she survived. But Patrick, the steadfast friend who hasn’t left her side, urges her to reconsider her decision. Worn down by his loving insistence, she agrees to follow through with the trip they’d planned before the tragedy.

During a stop at a country flea market, Jessica finds a faded document concealed in an antique. As new friends help her to translate the archaic French, they uncover the story of Adeline Baillard, a young woman who lived centuries before—her faith condemned, her life endangered, her community decimated by the Huguenot persecution.

Determined to learn the Baillard family’s fate, Jessica retraces their flight from France to England, spurred on by a need she doesn’t understand.

Could this stranger who lived three hundred years before hold the key to Jessica’s healing?

Inspy Readers, Michèle has kindly offered a giveaway of one paperback copy of The Space Between Words to someone who comments by September 2, 2019 (void where prohibited)!!

If you were flying to France tomorrow, what is the first thing/place you’d want to see?