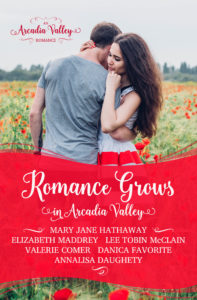 I’m very excited to finally be able to share Arcadia Valley, Idaho, with you! This is a project that six of us (Valerie Comer, Mary Jane Hathaway, Lee Tobin McClain, Danica Favorite, Annalisa Daughety, and myself) have been working on for close to a year. It started as Valerie Comer’s brainchild–to create a foodie based continuity series.

So, how does it work?

We’re kicking the series off with the book you see there on the left. Romance Grows in Arcadia Valley is a collection of six novellas. Each novella is the kickoff to a series set in our fictional town of Arcadia Valley, Idaho. Then, beginning in February, we’ll be releasing one book every month for the next eighteen months until all books in all six series are out!

My novella, Loaves & Wishes, introduces you to Ruth Baxter. She’s the eldest of four close-knit siblings. She moves to Arcadia Valley when she inherits a bed and breakfast from her childhood best friend. Here’s the blurb:

Content to farm the family land, Corban DeWitt only needs a wife to make his life complete. When he returns to Arcadia Valley, Idaho, from settling his parent’s estate in Florida, he finds Ruth Baxter has taken over the Bed and Breakfast next door. Despite getting off to a rocky start, Corban knows his new neighbor is just his type.

After a failed endeavor to run a hotel in Washington, D.C., Ruth is determined to make a success of the B&B she inherited from her best friend. Even if it means moving to the middle of nowhere to do it. When a disgruntled would-be beneficiary starts to make trouble, Ruth must decide if she can trust her neighbor—and the feelings she’s developing for him.

During the course of the novella, one of Ruth’s brothers, Jonah, decides to relocate to Arcadia Valley as well. And since he’s been a chef until then, he doesn’t want to veer too far from that path now that he’s moved. So he and Ruth put their heads together and come up with the idea of starting a community supported bakery (CSB). That bakery becomes the focal point of the rest of the series as the other two brothers, Micah and Malachi, also relocate to help out.

And of course everyone needs to get their very own happily ever after.

How about a little excerpt?

Ruth Baxter dropped her suitcase on the gleaming dark wood floors and pushed the front door closed before sagging against it. Home? What had Naomi been thinking? From somewhere in the depths of Ruth’s enormous purse, her cell rang. She dug around, her fingers closing around the device just as it stopped. She dragged it out and glanced at the screen. Jonah. Of course it was Jonah. And her other two brothers were probably in the room with him. When their parents died more than ten years ago, the four of them had become inseparable. Until now. The phone chimed with a request for a video chat.

Stifling a groan, she swiped across the screen and tapped accept. “Hey. I just got here.”

Jonah grinned and stepped backwards. The faces of Malachi and Micah joined his in the camera’s eye. “And? How’s your inheritance?”

Ruth flipped the phone around so they could see the foyer with its gleaming antiques. “This is as far as I’ve made it.”

“Not really your style, is it?” That was Micah.

Ruth flipped the phone around and shrugged. “No. But then, I’m having a hard time seeing Naomi choose these, either. Neither of us ever loved all things Victoriana. Maybe it suits the clientele? Or maybe it’s an opportunity to start over, put my own mark on things.”

“That’s my sister. Always the optimist.” Jonah made a goofy face.

“Have to be, with you three around. No pithy comments, Malachi?” Ruth locked her gaze on the youngest of her three brothers. Though Micah had only beaten him into the world by five minutes, the older twin never let it go.

Malachi’s hands flashed as he signed a response.

Ruth laughed. “That’s more like it. And yes, as the eldest of the four of us, I am closest to being an old lady. But I still hope I never get this obsessed with crocheted…whatever these are all over the tables. That said, a cat isn’t necessarily a bad idea. It’d at least be company.”

Ruth knew the answers to all of those questions, though they made little sense most days. Her best friend since kindergarten had tended toward eccentric even then. Losing her parents had pushed her right over the edge. “I’m pretty sure Idaho was the only possible place where Jaden wouldn’t follow. I’m also fairly certain Naomi didn’t plan to die.”

Micah frowned. “Sorry. But why couldn’t you wait for one of us to be free to come along?”

“Because she’s booked through the spring. And the people coming to experience the wonders of nature available within an easy drive of Arcadia Valley shouldn’t have to change their plans simply because cancer…” Ruth’s throat closed around the rest of her sentence and her eyes filled. She breathed in and blinked. No more crying. She gulped. “Anyway. We’ve been through this. I’m staying. At least through the spring and summer. Then, I guess we’ll see.”

Malachi tugged on Micah’s sleeve and he signed rapidly. Ruth squinted at the screen, but her youngest brother wasn’t fully in range. Micah grinned, nodding. “Mal has a great idea. He’s got some vacation that he’s owed. As do I. We’ll come out and help. What do you think?”

“Really? You’re sure?” Her heart leapt in her chest. Having her brothers here, even if it was just two of the three, would be amazing.

“We’re sure.” Micah punched Jonah’s arm. “What about you? Got any time saved up?”

Jonah nodded. “Yeah. I’ll talk to my boss tomorrow. Be careful, Ruth. I don’t like this.”

“You two were always so similar…I guess you probably will, too.” Jonah’s shoulders slumped. “Don’t be a stranger.”

“You either. Come soon, okay?” Ruth stared at her brothers standing shoulder-to-shoulder in the tiny screen. They were her walls of support. When they weren’t making her crazy. She blew them a kiss and hit end.

Romance Grows in Arcadia Valley will release in e-book and paperback on January 10, 2017. The next book in my Baxter Family Bakery series, Muffins & Moonbeams, will release in March of 2017.

You can pre-order Romance Grows in Arcadia Valley here: