I love sharing Australia with my readers. My books are set in Australia, and I like to include native birds and animals in my stories. In The Bridesmaid’s Hero, my new novella in the Love Blossoms box set, I introduce my readers to Finn the magpie. Finn is loosely based on the family of magpies who live near my home. 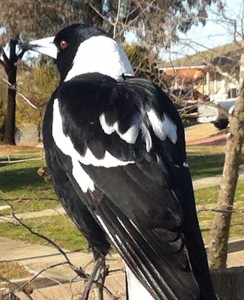 Bill is a friendly magpie. When he was a juvenile we used to see him all the time. Magpies are territorial, and the babies usually grow up and leave their home territory. Bill moved on last year, and my children see him at their school which is a mile away from our home. Bill occasionally visits, and he has a sweet tooth. We once caught Bill eating a chocolate chip cookie that my daughter had left outside. Bill wasn’t impressed when we took the cookie away from him and replaced it with sunflowers seeds. 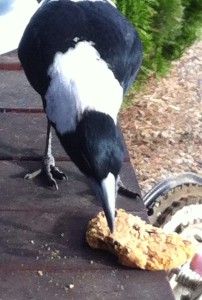 Clive is Bill’s younger brother. He was a cute baby magpie who liked showing off his feathers (see the photos below). Clive also migrated to a territory near the school. He’s now bigger than Bill and is known for eating junk food left in the playground by students. My daughter was impressed to see Clive eating a discarded apple today. 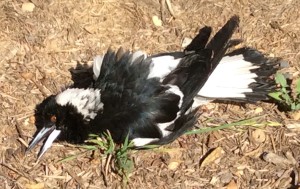 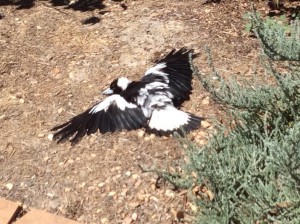 Clive, when he was a juvenile, showing off his feathers.

No-Beaky is Bill and Clive’s mother. She’s a lovely bird who is missing half of her top beak. She has the best voice and sings amazing carols. She also has a distinctive cry that she projects through our neighbourhood about half an hour before it starts raining. I know when I need to bring in the clothes from our outside line. 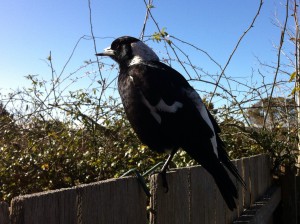 No-Beaky, the mother who is missing half of her top beak.

We call the father magpie ‘Invader’ because he’s not as friendly as the rest of the family. During Spring last year, when the latest group of babies were in a nearby nest, Invader had a big testosterone burst and his swooping activities reached new heights. He gained a reputation in our neighbourhood and the Rangers placed signs (see below) on lamp posts near our home. 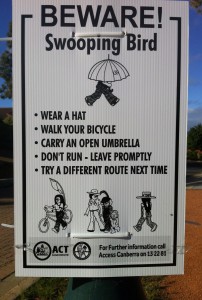 The Rangers discovered three babies in a nest in a tall gum tree with Invader and No-Beaky, but only two of the babies have survived. We’ve called one of the babies ‘Whiney’ because he or she cries all the time. Whiney is an anxious magpie and a parenting challenge for Invader and No-Beaky. The other baby is more independent and rarely cries like Whiney. No-Beaky and Invader are from different magpie breeds. No-Beaky is taller and broader than Invader. Whiney is already bigger than Invader, and the babies still have their gray feathers. 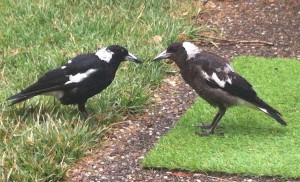 Invader (the father) is on the left and he feeds earthworms to Whiney by placing them in the baby magpie’s beak.

Today I’m giving away an Amazon Kindle copy of the Love Blossoms box set to a reader who leaves a comment on this post. The giveaway will close on Friday night (US time) and the winner will be announced in the Sunday Edition on Valentine’s Day. 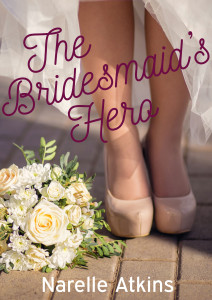 Pastry chef Serena Blaxland isn’t staying in the small Australian town of Snowgum Creek. She’s there for her sister’s wedding, and to help out at the family B&B until her mother’s arm heals. Sparks fly when the handsome driver of their bridal car saves Serena from disrupting her sister’s perfect wedding day.

Harry Westmore’s dream of becoming an equine vet was put on hold when his father passed away. He’s working several jobs in his home town to pay his bills and prepare for his future career. He can’t stay away from the beautiful chef when he visits the B&B each day to look after her mother’s horses.

Serena’s home is in Canberra, where she has built a successful career. When Harry’s offered an opportunity too good to refuse, they must decide if their love and faith can overcome all obstacles.

The Bridesmaid’s Hero is a standalone novella and Book 1.5 in the Snowgum Creek series. 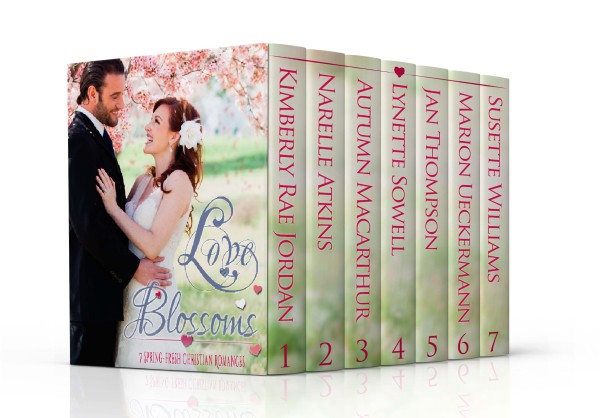