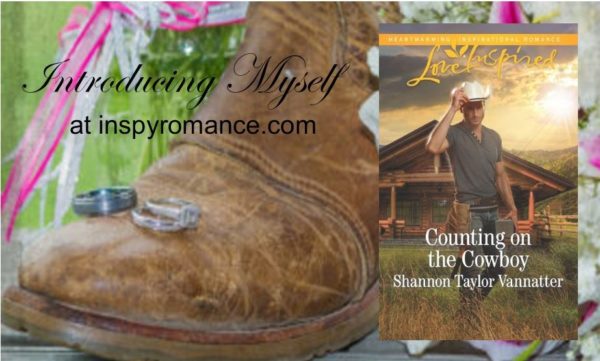 Back when the Inspy Romance Blog started, a friend of mine asked if I was interested in joining. At the time, I was on another group blog, had one of my own, and was up to my eyeballs in deadlines. I declined. Over the years, I checked in with Inspy Romance several times and was very impressed. It connected with readers – something I love to do. I mean who could be better to talk to than fellow book lovers.

I regretted not joining. Especially after I was asked to be a guest a few times and got to chat with so many readers. I finally told Elizabeth that if they ever needed a new member, to hit me up. So here I am. It’s official, I’m an Inspy Romance blogger. And I’m so excited!

Since I’m new here, I thought I’d tell you a bit about myself starting with my rough and tumble journey to publication. It took me 9 1/2 years to get published. During those years, I stopped counting rejection letters at 200, attended countless writers conferences, group meetings, and workshops. Discouragement made me want to quit numerous times. But every time I was down, God would send encouragement by letting me place in a local writing conference contest or an editor would take time to write an encouraging tip on a rejection letter.

In 2001, I thought I’d made it, but it turned out to be a big letdown. I got an offer from a Print on Demand publisher. I didn’t even know what that was, but soon learned it meant the book could only be ordered online. Back then, no one ordered books online—especially books by authors they’d never heard of. And the book was painfully overpriced.

Once we learned my book wouldn’t be in stores, my husband pulled something shifty for me. He went to 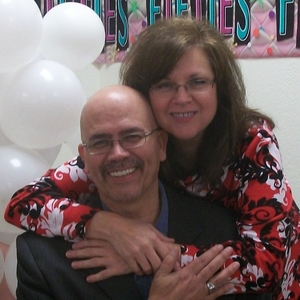 our local Hastings store to order my book. He planned to not pick it up, so they’d have to put it on their shelf and someone might buy it. Yes, he’s a pastor, but he only does shifty things for me.

But when he ordered the book, the store clerk said that title wasn’t in their system, but another title by the same author was. Huh? That’s how we learned that another POD publisher had published my first without my knowledge after sending me a rejection letter. I had to hire a lawyer and it got ugly. We ended up getting publication discontinued and taking the book off of websites, but I never got royalties for the whopping three copies sold.

I really wanted to quit after that. I tried to quit, but I couldn’t. Every time, I tried, I’d get all these ideas for books. God instilled a driving force inside me and sent more encouragement through honorable mentions in magazine writing contests. In 2008, two of my short stories were published in magazines. In desperation, I wrote two versions of the same book – shorter length and longer length, so I could shop it around to more publishers.

Finally, I got an offer from two publishers in 2009, one for the short version and one for the long. I signed with an agent and she thought the longer length publisher would be best for my career. A month later, in the middle of negotiations, the contract was withdrawn. When my agent gave me this news, she assured me it was okay because she’d accepted the contract from the shorter length publisher. That bothered me because she made the decision without consulting me.

In the end, I learned that my agent had a bad rep in the industry, had lost my contract, and was on the verge of losing my new one. Once again, discouraged, I discontinued our association and went it alone. The whole thing cast a pall over my first book getting published.

Over the next two years, I signed three contracts and had three books published by Heartsong Presents. And the rollercoaster went up again.

But the worst was still yet to come. In June, 2011, after five contracts and four books published with Heartsong Presents, I was walking on air. I’d just turned in my fifth title and spent a great weekend in Springfield, MO teaching classes at a romance writers conference. When I got home, I got an e-mail.  My publisher had decided to discontinue the Heartsong Presents line.

I still had one contracted book and another verbally committed to for publication with the line. I thought my two babies would never see the light of day and I might never get another book published. My new editor told me that the two remaining books would probably eventually publish as e-books, but to wait on writing my sixth title until the dust settled. 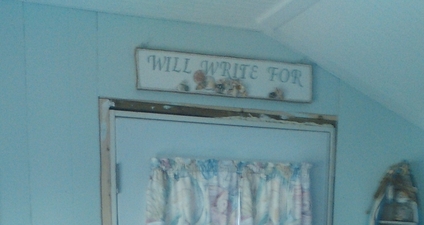 This is about the time I made this sign for my office. To keep myself grounded. In reality, I write for God. But this sign reminds me, it’s not about finances. I collect seashells, so my sign says, Will Write For. Underneath, I glued seashells. So instead of writing for peanuts, I write for seashells. (Excuse the lack of trim around the door, we just added a room onto the back of our house for my office. And my seashell collection.)

Back to my story – that September, I attended the ACFW Conference in St. Louis. Despite my dim future, I was excited because I got to teach a class. More God-sent encouragement. I ran into my editor and she said to write my book because another publisher was buying Heartsong, but she couldn’t tell me who.

My heart soared and I walked on air through the rest of the conference. At the same conference, I met with a publisher who expressed significant interest in a longer length romance from me.

For the next three months, I wrote my sixth Heartsong title with no idea who I was writing it for. Weeks before my verbal deadline, I got an e-mail announcing that Harlequin was my new publisher.

Publishing is still a roller coaster. That publisher interested in a longer length book from me went out of business. In 2012, I signed with a new agent, the perfect fit for me. She landed me a contract with Harlequin to continue my rodeo series I began with the former owner of Heartsong and I got a new contract with them for six more books.

When history repeated itself and Harlequin decided to end the line, God worked out a deal to release my four remaining contracted books in the Love Inspired line. I tell people, I slipped through the back door at Harlequin. Twice.

Even with the ups and downs, I still love writing. Counting on the Cowboy is my fifteenth published title. And that’s not even counting the two POD books. God gave me a calling. He didn’t say it would be easy or that great success would come with it. He just said, do it. So, until He tells me to stop, I’ll keep writing. And collecting seashells to fill up my new office.

How about you? What do you collect? Do you have any rooms at your house that still need trim?