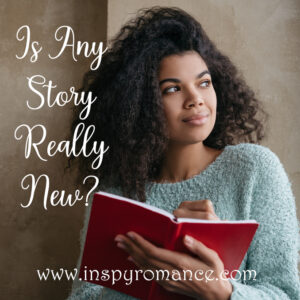 Several months ago, as I scribbled down a rough concept for an upcoming book, an unpleasant thought hit me. My main characters and plot reminded me of a famous work of 19th century fiction. Horrified, I considered scrapping the idea and starting afresh. What if people judged my book as an inferior copy of a classic?

Unless it’s a deliberate retelling or reimagining, a lot of authors are terrified of using an idea that’s appeared in another book or movie. Every author wants to write a story that’s completely original. Nobody who slaves over a book for months wants readers to think of their work as hackneyed.

However, King Solomon, one of the wisest people who has ever lived, said there is nothing new under the sun. And that was nearly three thousand years ago! If there was nothing new then, I can imagine how much more true that is today.

When we write books, aren’t we all just recycling the same stories that have been around for years?

Consider this concept: a young orphan who lost his parents as an infant is living with his dull relatives. He dreams of a more exciting future, but it seems out of his reach. He’ll never get out of this boring backwater. A stranger suddenly appears, and the orphan learns he is the chosen hero, the world’s only hope to defeat a great evil. Along with a motley group of new friends and a wise mentor, the hero grows into his strength and conquers the evil overlord.

This description fits several stories, including two huge blockbusters: Star Wars: A New Hope and Harry Potter. And yet, despite their core similarities, these stories are very different.

On the one hand, I believe every story is an echo of something else. There are no entirely new stories. However, every author, with their unique voice, experiences and creative gift, can make a story fresh.

Someday I’d love to try a creative experiment with a group of Christian romance authors: everyone is given the same basic concept to run with and told to turn it into a full story of their own. I’m sure that, even within the same genre, there would be a rich variety of stories.

So, I’m going to carry on with my story idea that resembles a tale from Regency England. I won’t call it a “retelling.” Nor am I quite ready to say it was inspired by a particular novel. Hopefully, as I carry on fleshing out the characters and their story emerges, my God-given creativity will make it completely fresh, while still familiar.

Does it bother you if you read two stories that are similar or that remind you of something else? Let me know in the comments.