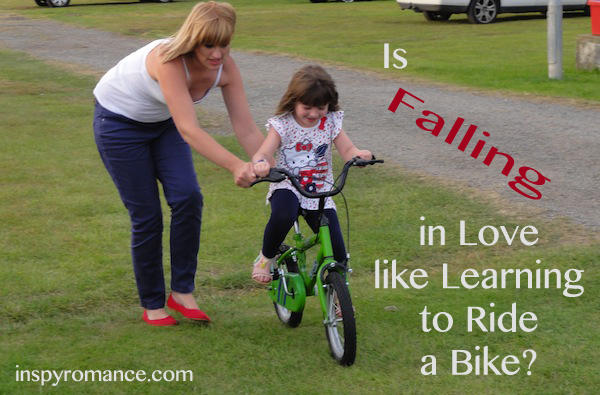 Ever ride a bike? Did you notice that the slower you turned those pedals, the wobblier the exercise became, and the more likely you were to fall off?

In Pinky Promise, Ian Tomlinson is watching his girlfriend teach his six-year-old to ride a two-wheeler. It strikes him that relationships might be that way. That maybe taking things too slowly is a danger in itself.

We don’t usually think of romance as something that ought to be rushed. But for every story of a couple who took several years to commit to each other long term, we hear of others who were married quickly and did not regret it.

My husband decided I was the girl for him in twelfth grade. I was not convinced. ;) But we married three years after graduation… thirty-five years ago this summer.

How can two single parents withstand the force of their determined mini-matchmakers? Especially when they do feel the lure of attraction, but are afraid to let it show for fear of adding fuel to the little girls’ hopes?

I love writing. I really do. Yet Pinky Promise is special. Yes, they all are, but I honestly had more fun than a barrel of monkeys pitting Kelly and Ian against their daughters, Elena and Sophie, while Ian tried to figure out if going faster or slower was going to keep their relationship moving ahead. 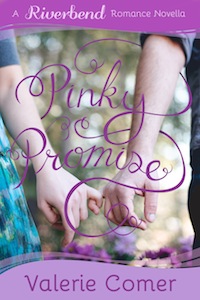 “Hi, Mommy!” Elena ran across the schoolyard, her long curls streaming behind her. “I met my twin sister today.”

Kelly Bryant knelt and braced herself for the collision. “Did you now? That’s interesting. I never knew you had a twin.”

Wham. The sturdy little girl hurtled into her arms. “But I do! Miss Jamieson said so. She said, why look at you two. You have the same birthday and the same cute noses. You must be twins.”

Time to explain how it worked… or not? Kelly hugged her daughter. “That’s great. I’d like to meet her.”

“Well, good, ’cause she’s right over there. See her, Mommy? She’s waving. And she has a daddy but no mommy. Why don’t I gots a daddy?”

“You don’t have a daddy.” Kelly smoothed Elena’s tangled blond hair, wild from swinging and climbing and sliding, and followed the pointing finger to see a little girl with a brown bob clinging to the hand of a tall man. The pair turned and looked at them, and the girl jumped excitedly, pointing back.

Looked like Kelly was going to be a victim of childhood matchmaking. Temporary victim. “Okay, baby girl, let’s go meet them.”

“Yay!” Elena tugged Kelly to her feet and dragged her forward a few steps before abandoning her to run into the other child’s arms. “Sophie!”

Kelly trailed along. Sure, she wanted to meet a great guy. Most single moms probably would. But the older Elena got, the more demanding she got on the subject. The girl was certain all that mattered was the daddy part. But a man who’d cherish them both? Like that was going to happen.

“I don’t gots a daddy.” Elena planted both hands on her wee hips as she tilted her head up at the tall guy.

“Elena. The word is have.” How many times had Kelly tried to break her daughter’s habit? And never more embarrassing than the present moment. “You don’t have a daddy.”

The man chuckled. “They say it like they see it, don’t they?”

He nodded. “I’m Ian Tomlinson. Sophie and I just moved to Riverbend. I’m the new Public Works Manager for the town.”

It got better and better. That made him the new boss she’d heard was coming. “Um, welcome. I’m one of your serfs.” And not one who would be seen trying to climb the town ladder by schmoozing her boss. Not that she was interested, anyway. He wasn’t that good looking. Just because he was tall with broad shoulders and brown hair that curled around his ears, brushing his collar. Just because he had an adorable grin turned on all three females in his presence. Just because he caught her staring, and the grin grew a little wider, crinkling his eyes. No, she’d never be attracted to a guy like that.

Pinky Promise is available an e-book on Amazon only. You can pre-order it for 99¢ or borrow it for free on Kindle Unlimited after April 7.