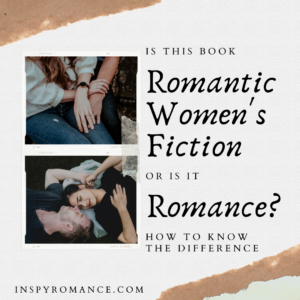 You’re ready to grab something new off the TBR or a gorgeous cover snagged your attention, but you’re in the mood for a certain kind of tale. It might be a tearjerker, or maybe that’s what you want to avoid. Or perhaps you want a little romance, but would prefer it takes a backseat to the rest of the story. How can you know ahead of time whether what you’re in the mood for is actually romantic women’s fiction or romance?

After doing quite a bit of research for an upcoming re-release, I have a few pointers to help you narrow the search. Of course, this post may or may not be entirely helpful considering not all booksellers make much distinction. I know Amazon does, because in the ads console they allow publishers to choose which categories to target for a particular title, but that’s not always the case with brick-and-mortar stores or other online booksellers. Plus, some publishers and indie authors place their books in both genre categories, so…

Let’s first talk about the basic characteristics of romance, since that’s what we focus on here at InspyRomance (specifically CCR):

Boy meets girl. Sparks fly. They’ve each got something that keeps them from leaping in with both feet for a while, but you know they’ll have to work through it eventually. There’s the dance, the push and pull, chemistry, whatever you want to call it, but that troublesome thing keeps cropping up until they’re forced to deal with it. It might break them apart for a bit, but after some soul searching comes that decision to fight for the relationship, likely some swoony kisses, and BAM, happily ever after. The end. Authors can fancy it up with different tropes, varying levels of faith and drama, but we know without a doubt our hero and heroine are going to get through it together and we’ll all have that happy ending we’ve been turning pages for. Essentially, romance = happy ending.

There’s often quite a bit of overlap, but there are a few key points that differ, and as readers we want to be prepared for them (yet another reason why reviews can be so helpful in knowing what we’re getting into!). They are NOT the same thing!

I hope that helps clear up a bit of the confusion if you’re like me and knew there was a difference, but couldn’t quite pinpoint it. To boil it down really simple, if the romance is a thread in the fabric of the story, it’s women’s fiction. If romance is the whole fabric and everything would unravel without it, it’s romance.

I’d love to hear your thoughts on the subject. Now that you’re considering things, perhaps there are a few titles you’ve loved recently that weren’t romances but women’s fiction? (Think Carolyn Brown, a popular mainstream author whose books often get miscategorized under romance but are actually Southern women’s fiction.) Do you find you’re more drawn to one or the other? 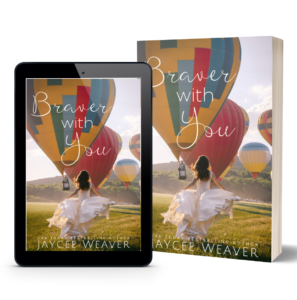 Due to my own research, I recently realized that several of my own books are miscategorized and I now need to go update their genre categories so they will reach their appropriate audience. My novella Braver With You, for example, which appeared in October 2021’s Save the Date anthology is being re-released on its own next month. I ended up rewriting the blurb for women’s fiction because Ashlyn and Conrad’s relationship isn’t the central theme of the story, it’s Ashlyn’s need to stand up to her mother and their need to work through the trauma of the past so that she and Conrad can move away and begin their lives together without her mother’s influence. So while there is romance, and they’re planning a wedding, it’s not A romance. I had no idea. LOL!

To celebrate us all learning something new together plus the re-release, I’ll choose a winner at random from the comments to receive a signed paperback of Braver With You. Open to US residents only, should an international winner be selected, winner will receive an eBook edition instead. Thank you!