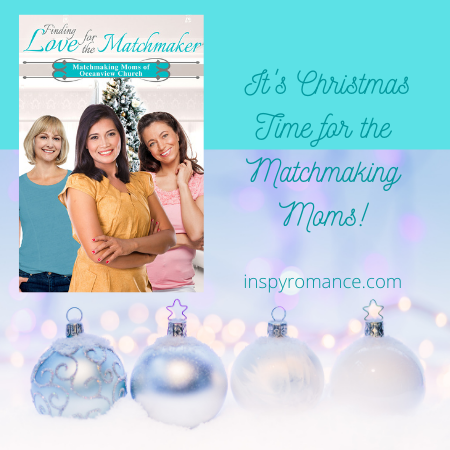 October 7 sees the release of the final book in my Matchmaking Moms of Oceanview Church series that I “rapid released” over a period of five months.  So far we’ve met Dahlia, Lily and Rose, the three moms of adult children who had stalled out in the love department.  They banded together to form a covert team of matchmakers to help their children find love.  Together, they completed three successful matches:  for Winston the Loner, for Isabelle the Workaholic and for Micah the Playboy.

In our final installment, Finding Love for the Matchmaker, the Matchmaking Moms have a wedding to plan!  Micah and Maria’s romance has been a whirlwind requiring both of them to make major changes in their lives, but they are confident they are following God’s path.  They are getting married on December 23. 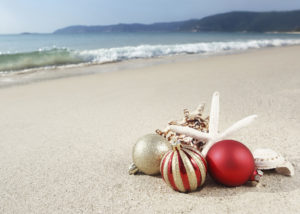 Christmas balls and seashells on the beach near the sea.

What the matchmakers don’t expect is that those smart kids they raised figured out, sometime along the way, what their moms were up to.  And they decide to turn the tables on them and let the moms in on their discovery.

In addition, Micah searches for “the one that got away” from Dahlia’s past and hopes to reunite them.  Will the chronically single Dahlia open her heart to fall in love?  Will she learn from past mistakes and reprioritize love over work to avoid two broken hearts?  Will the couples actually find love for the matchmaker?

Only time will tell.  Snag this shorter-length novel filled with fun and love and faith to find out.  Meanwhile, here’s an excerpt: 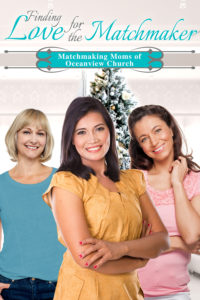 “Put the coffee pot on, Dahlia.  We’ve got a wedding to plan!”

Dahlia Benjamin, Lily Adams and Rose Harmon were no strangers to seemingly insurmountable jobs.  After all, nearly a year ago, they’d met for the first time sitting around a table at Oceanview Church.  Their Bible Study leader had instructed each table to get to know each other.  Dig deep, and discover one thing they all had in common.

It was a more difficult task than originally thought.  After pushing aside the easy things like:  they were all women; they were all mothers; they were all Christians; they settled on one actionable truth about themselves.

Each one of them had an adult child completely stalled out in the love department.

And although each of these “kids” was fine in their loveless state, the Moms knew that their lives would be so much better if they found love. Life was better in love.  And so … they decided to take it a step further.  They would help their children find love.  And because they were all quite sure their children wouldn’t want their help, they would do it secretly.

Hence, the Matchmaking Moms of Oceanview Church was born: a covert team of matchmakers determined to jump start the stalled love lives of their adult children.

It had been an eventful year!  First Lily’s son Winston, the loner, was matched with a lovely, although somewhat intense woman named Tina, bonded together by their love of dogs.  Next, Rose’s daughter Isabelle, the workaholic, was matched with a creative, handsome photographer named Zach, bonded together by their entrepreneurial spirits.  Finally, Dahlia’s son Micah, the playboy, was matched with the beautiful widow Maria and her daughter Andrea.  Despite Micah’s scores of attentive women, it was sweet and caring Maria who ultimately captured his heart.

Which led to today’s task.  No, their job as Matchmaking Moms was not quite complete.  Barely had they the chance to celebrate three successful matches, and they needed to move on:  a Christmas wedding!  Micah and Maria would be married here in Murrells Inlet, South Carolina in a small but memorable wedding ceremony.  And, after the vows were shared and everyone was enjoying the reception, the Matchmaking Moms would finally move into the spotlight and reveal their behind-the-scenes maneuvering that led to all three matches.

Oh, won’t it be exciting to see the surprise on the faces of all six subjects?

The work set out in front of them a year ago was complete, but maybe.  Just maybe … wouldn’t it be fun to start all over?  Find new subjects.  New matches.  New love.  They were quite a team, after all, and boy, were they good at it! 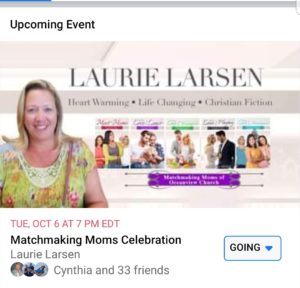 But that was a matter to be considered at another time because right now … they had a wedding to plan!

Party invitation!  To celebrate not only the release of Book 5: Finding Love for the Matchmaker, but also the successful release of the entire series, I’m throwing a party!  Are you on Facebook?  I’d love to have you join me the evening of October 6.  Here’s your invitation.  I’ll be sharing all about the books, behind the scenes stories, asking for

your input AND the best part … giving away a lot of prizes!  So many of my InspyRomance author friends and other Christian authors have graciously offered to donate books to give away to my party guests. All you have to do is show up and participate and you may just win a prize!

Question:  This last book has just about everything in it … a “second chance at love” plot line, an “older couple” romance, a wedding, Christmas and New Years!  A strong message of faith and trust in the Lord.  And lots of great beachy setting and fun.  Which of these features gets you the most excited to read it?