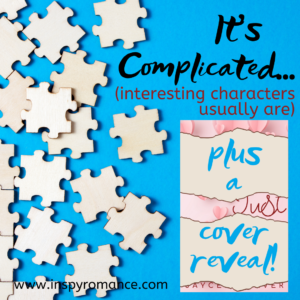 If you’ve been on social media at any point in the last decade, you’ve probably noticed at least one of your “friends” with the relationship status It’s Complicated. The phrase has filtered its way into our culture in all sorts of ways—movie titles, song lyrics, book themes, mindsets.

It’s complicated isn’t always a response we’d like to accept, but it’s often the easiest response to most of those nosy questions we can’t completely answer without either revealing more than we’re comfortable with or shocking the inquisitor with an unavoidably long, drawn out response. It’s more polite than telling them none of your business, right? Ha ha!

I’m a reader first. Becoming an author flowed naturally from that love, but always, first, a reader. I’ll list a few that stick out in my mind, then I’ll tell you about some I’ve written. After that, I’ll share with you the cover of my latest book and why I loved writing the characters in it. :)

From IR’s own Elizabeth Maddrey, comes Lydia Brown in Wisdom to Know. She’s a pastor’s daughter caught up in a binding chain of bad choices. I read this a few years ago, but she’s a heroine who has stuck with me.  Another that stands out is Jen Andrews in A Handful of Hope. Her struggle with depression is thoroughly true-to-life and so well presented.

Then there’s Janet Ferguson. Oh my goodness, I just love her characters. Raw emotion, depth, intensity, tragedy, internal struggles, wars against sin and pain and fear…and that’s just the tip of the iceberg. I’ve loved them all, but my favorite is still The Art of Rivers.

Oh! And while I’m thinking of other IR authors (and can I just say, there are a lot of amazing ladies in this bunch, so I’m only picking a couple real quickly) I have to include Valerie M. Bodden. The entire Hope Springs series is wonderful—with a plethora of complex characters—but none more complicated than bad girl Jade in Not Until Us.

Melissa Tagg also has a way with complicated characters. I’d have to say my favorite is Now and Then and Always. Marshall and Mara both have painful stories they’re working through as they build a relationship while restoring an old B&B.

No list would be complete without Lea Sim’s two highly emotional novels, Running From Monday and Waiting on Tuesday. Lea tackles some difficult topics, and her characters have endured severe abuse, infidelity, loss, and more. Readers are put a bit through the wringer on these, but it’s their richness and authenticity of emotion that make them such memorable reads.

T.I. Lowe’s Until I Do—and her whole backlist, actually—is another perfect example. A marriage in shambles, readers get an inside look at a couple’s struggle with becoming empty-nesters and their floundering relationship. Other books by TI Lowe feature characters running from dark, violent secrets, human trafficking, and other trauma.

Several friends I asked reminded me of Tammy L. Gray. I’ve read quite a few of her books, but Mercy’s Flight is definitely one that stands out. Violent pasts, betrayal, children in need, secrets, and a journey to trust and find courage barely scratch the surface of Matt and Grace’s story.

I absolutely HAVE to include one of my very favorites, Jennifer Rodewald. I need to take a break between her books because I can pretty much guarantee I’ll be gutted afterward. Her Grace Revealed trilogy is ripe with intense, complicated characters with highly charged emotions and very real issues, but my personal favorite is still The Carpenter’s Daughter.

Whew! That ended up being a rather long list, so I’ll cut myself off there. Hopefully I’ve introduced you to some new-to-you authors, titles, or characters you’ll enjoy as much as I have.

Since I’ve already gone on long enough, I’ll summarize what kind of complicated characters I enjoy writing. In Whatever Comes Our Way, the hero and heroine face traumatic pasts, grief, guilt, anxiety attacks, and the aftermath of loved ones’ drug use. In What Makes a Home, prickly Jobie’s colorful lifestyle catches up to her as we come to understand why she chooses to live the way she does (until she meets Jesus!). In Adrift, (which is always free) Erin still experiences grief after losing her husband too young. Now, not all of my characters are over-complicated. Some have it pretty easy, so I like to put them in challenging situations instead. My heart is to create realistic characters who are flawed and, yes, complicated but eventually figure out what it is God wants to work out in their lives.

So there you have it. Probably should have narrowed it down and maybe dug a little deeper into each character, but I’m a more-is-better kind of girl. Ha ha! 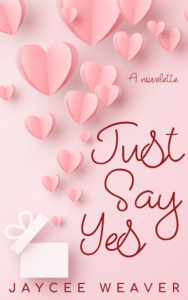 For the last part of my post, I’d like to reveal the cover to my newest book out this week, which just so happens to be FREE to all subscribers to my email newsletter. It’s a bit different from my usual contemporary Christian romance fare, as it’s a dual-POV in first person with two heroines. Each has her own story line with her own love interest/romance, but their friendship takes center stage in this novelette. Lauren’s a steady presence for Kimbrye, who just might be one of the most hurting of all the heroines I’ve written so far.

I can’t wait to read in your comments below any recommendations YOU have for favorite complicated characters. I’m always on the lookout for my newest book bestie! Take care and enjoy the rest of your week, especially with our upcoming BIRTHDAY BASH!!