I’m excited to have my friend, author Jennifer Rodewald, here to share a bit of holiday joy, and she’s giving away an e-copy of her new novella, Ordinary Snowflakes! She’s included an excerpt! I’m so excited for you to read it! 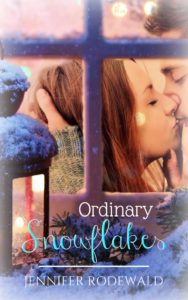 Someone has noticed me. A secret admirer? A man with a good heart, who sees how much I actually need help, even though I never admit it? Maybe this is the beginning of a beautiful story—a romance full of hope and second chances and love.

A secret Santa gift left on Kale Brennan’s front porch opens up a fresh view of her ordinary life, and perhaps of God. Maybe she does matter. Maybe God sees her—as does a new-to-town music teacher who has her seven-year-old daughter gushing and her own knees buckling with his killer smile. But as Kale embraces new possibilities, a staple in her life—a man who is kind and steady, not to mention necessary for her injured daughter’s recovery—also snatches her attention in an unexpected way. Will the one pursuing her with his secret gift and kind gestures be the one her heart longs for in the end?

Craig was right. Suzanna could throw a snowball like a bullet from a rifle. She outplayed me shamelessly, and her laughter gave me a little insight as to why Paul had pursued her even when everyone else in town thought she was about as nice as a rattler in October.

Guess everyone had scars. We just wore them in different places and with different bandages to hide them. Suzanna had worn hers with anger overtop.

Me? I didn’t know how mine looked to others. Didn’t pause life long enough to consider it, but after Suzanna had given me an olive branch of grace by offering me an out of this snowball war I wasn’t good at and didn’t love, I suddenly wondered. About her and about me.

“Where’d you learn to throw like that?” I asked as she set a pot of coffee to brew. “Did you play softball or something?”

A sad, reserved smile smoothed her lips as she turned to me. “My first husband. He played baseball in college.”

Hold everything. Suzanna had been married? Before Paul? Didn’t seem possible. She wasn’t that much older than me, and she’d been Suzanna Wilton—same last name as her dad—before she became Suzanna Rustin.

“I know. I should have told people.” Suzanna slid into the chair across from mine, and a small pause filled the space.

Andrea had stayed outside, determined to pummel her brother with the white stuff. Boy, if ever there were opposites, Suzanna and Andrea were it. Dre was known as the fun, live it up but be nice kind of woman. She was the kind of person everyone wanted at a party.

“He died. Cancer. I was pretty devastated. My family had fallen apart. My mom and I have had a rough past, and Jason—my first husband—was my safe place.” She sat back, her gaze steady. Clearly she’d worked through some things since she’d first settled in Rock Creek two years before. “I really thought that God hated me. All these disappointments in my life—I felt like I was completely alone. That He didn’t notice me, and if He did, He just flat out wasn’t interested.”

Her confession triggered an avalanche of memories. Bad ones. Multiple nights of ongoing fights. Tears. Pleading. As if dealing with the extent of Sydney’s injuries hadn’t been enough.

“That’s what Brad thought…” I whispered.

Suzanna held my gaze, her silence inviting me to continue. “Brad is Syd’s father. We were together until a few months after Sydney’s accident. He was never really the faithful church type, but I thought he’d grow into it, and since I prayed that Jesus would save him, I figured it was just a matter of time… I guess it was. Sydney’s accident turned him ice cold. At first he started praying—no demanding—‘God, heal her. We can’t do this.’ Then…”

I paused, tears fogging my vision. “Syd didn’t get better. In fact, when her first cast came off and they re-x-rayed her leg, the news got worse. A lot of the bone fragments were dead. She needed transplants, and it was going to be a long process.

“He quit. Said God was either not real or didn’t care, and he wasn’t built for this kind of hard life. He quit us both.”

A mutual hush bonded us as we waited for the drip brew to gurgle. When I looked up, Suzanna’s kind blue eyes were already settled on me.

I tried to brush off her compassion, because it made me self-conscious. “Well, you did too.”

“Looks like you’ve fared a bit better than I did.” She traced the grain of her kitchen table. “I was one bitter, lonely woman.”

“I had Syd and my parents, so…” I hesitated, wondering how much prying would be out of line. Suzanna had opened up first though. “Did Paul change things for you?”

She laughed, moving to pour the coffee into two mugs. “That’s a complicated question, with a not-so-clear answer. Paul, and his family, embodied everything that I longed for—stability and acceptance. Love. But it wasn’t enough. Even when I knew Paul loved me, it just didn’t fill the hole.” She chuckled, shaking her head. “He said I was like a leaky water trough and he couldn’t fix me.”

The mug made a hollow thud against the table as she set it in front of me.

“I left. Spent some more time yelling at God, not believing that He was listening, that He cared about me. And then—”

“What?” I leaned forward.

“I saw Him. The real God, the One who had been waiting for me to fall into His arms the whole time.”

I traced the handle of my mug. What had that been like, to see God—to fall into His arms? I’d never stopped believing in Him, but…well, I often thought He didn’t see me. I was too insignificant. My life didn’t matter that much.

“How?” I asked before realizing the word came out of my mouth. Clearing my throat, I glanced to my coffee. “I mean, how do you fall into His arms?”

Suzanna folded her hands and rested her elbows on the table. “I’m not sure I know how to explain it. But I guess I kept expecting Him to show up in the big moments. To save Jason. Fix my family. When He didn’t, resentment set in. But, well, maybe we shouldn’t just be looking for God in those big moments, because if we can’t see Him in the small everyday things, we won’t be able to understand that He’s there right beside us in the moments that cave in our lives.”

My throat swelled as I processed her story—her assessment. Life had caved in on me, and honestly, I didn’t think I’d recovered. I wasn’t angry, but I hadn’t looked for God’s hand in it either. I guess I hadn’t expected it to be there. 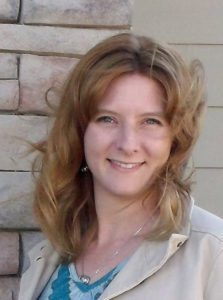 Ever feel invisible? Or just too ordinary to be noticed?

Yeah. Me too. I live an everyday, not so noticeable life. Predictable. Nothing super noteworthy at all. Most of the time, that’s fine by me. But…

Well, who doesn’t love to feel special? At least sometimes? Could just be me.

But there’s something terribly important, not to be missed wrapped in the beauty of the Christmas story. That sweet nativity, the most extraordinary moment in all of human history happened in the most ordinary place, with the most unnoticeable of people. A pair on young people, non-descript and living quiet, everyday lives. A group of shepherds spread out over the fields, just as they had been for basically their whole lives.

A baby boy, wrapped in cloths and laying in a manger.

Jesus came to dwell with the ordinary. To teach them. To be with them. To save them.

I wonder how often we, like the Wisemen of the story, go looking for Christ in a palace—in the extraordinary—when really, He came to the manger. To the lowly, the common. The ordinary. Me? I do it often. But here’s what I learned with Kale Brennan—

“maybe we shouldn’t just be looking for God in those big moments, because if we can’t see Him in the small everyday things, we won’t be able to understand that He’s there right beside us in the moments that cave in our lives.”

Here’s the truth. Life can feel ordinary to us. But really, our God doesn’t see us that way. Consider the snowflake—not a single one of them are alike. We see plain old snow blanketing the hills on a cold December day. But God? He sees each flake. Each unique, special flake.

There aren’t ordinary snowflakes. Because they’re crafted by and extraordinary God.

Many, O Lord my God, are Your wonderful works

Which you have done;

And Your thoughts toward us

Cannot be recounted to You in order;

If I would declare and speak of them,

They are more than can be numbered.

Jennifer Rodewald is passionate about the Word of God and the powerful vehicle of story. The draw to fiction has tugged hard on her heart since childhood, and when she began pursuing writing she set on stories that reveal the grace of God.

Jen lives and writes in a lovely speck of a town where she watches with amazement while her children grow up way too fast, gardens, and marvels at God’s mighty hand in everyday life. Four kids and her own personal superman make her home in southwestern Nebraska delightfully chaotic.

Thank you so much, Jennifer! One person who leaves a comment by Friday, December 23rd  will win an e-copy of this novella!