During all of the years I worked as a registered dietitian, I used a Franklin planner–a heavy leather bound, zippered 2″ ring notebook which basically served as my brain.  It was a perfect system for forgetful me–two pages per day with room for lots of notes and reminders, plus a two page  calendar for each month, and I used it constantly.  I could look back five years and see exactly what I did that day.  Who I met with, what my goals were. What I accomplished in both my professional career and in my writing.

Conversely, I could make reminder notes for myself, or write in appointments a year ahead and never forget–that thick notebook was with me all the time. At the end of a year I put  important pages into a storage binder.  Unlike a diary or journal, it was far more practical.  I recently flipped through some of those binders and it was fun to find my lists of goals from each year and see if I succeeded or not.

But…in 2010 I quit my day job to concentrate on writing, and the planner sort of went by the wayside, replaced by the kitchen calendar, the calendar in my office, and sticky notes everywhere. Not such a good system–and one that often left me frantically hunting for the the info I needed.  And then, I realized  something so simple:  I could simply use a blank-page journal, date each page as I used it, and make lists that I would keep.  Lists I could refer to weeks or months later, if need be. Duh! 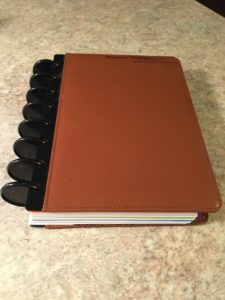 An extra thick spiral notebook worked perfectly…and then I found this Levenger Circa notebook in my closet and continued my simple daily to-do lists. But on the Fourth of July, while having dinner with our son, his wife and his inlaws, I learned about “bullet journaling” and a light came on.  What a great idea!  Have you heard of this?

If you Google “bullet journals”  you’ll find dozens of websites, blogs, Youtube videos and even Pinterest pages on variations of this idea, that explain it step-by-step.  It’s so much better than my simple daily lists, and I am hooked!  And it’s so simple–a way to organize and keep track of every facet of your busy life.

I now have hopes that instead of paddling madly trying to stay afloat and on-time with  every aspect of social media responsibilities, writing, and the business of keeping my personal and family life organized, I will do a better job of it all in the future! Have you tried doing it?  If so what do you think? My son’s MIL and two sisters-in-law use pretty spiral journal notebooks and make them prettier, in the style of Susan Branch’s wonderful hardcovers. I am simply practical.