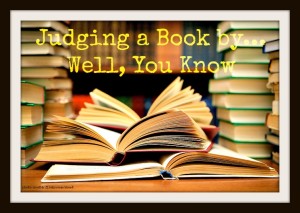 The phrase “you can’t judge a book by the binding” was first documented in the Journal of American Speech in 1944. Since then, the cliche has entered our lexicon as a reminder that things aren’t always what they seem.

But for a reader, often the cover is the gateway to a book. It’s the first thing we see on the shelves or as we browse through the lists online. Authors with print books on the shelf want that prized “turn out”space. Readers are more likely to buy a book if they see a well-designed full cover facing them versus the title and author’s name on the spine. Self-published authors can have a cover designer optimize the design for Kindle, featuring size ratios and fonts which show up best in the thumbnail photos commonly seen while browsing.

In addition to being an author, I’m also a reader–and I’m just like you. I love a good cover. Covers are so important that the Houston (Texas) Bay Area chapter of Romance Writers of America hosts an annual competition–Judge a Book by Its Cover (aka, JABBIC). You can see this year’s winners here. Clearly, there’s a trend in torsos going on–except in the inspy category!

When choosing my recent covers for the first two books in my Holiday Hearts series, I worked with the designer to get them just right. And I went to opposite ends of the spectrum for both of them. In New Year’s Eve, I went with a neutral theme. Eve and Spencer meet again on the beach. The brown sand and the gray skies of January play into what’s to come, and I wanted to set that tone for readers right from the start.

But in The Cupid Caper, the story centers around a fun celebration at a high school that catches two teachers up in the middle of the hijinks. The goal with this cover was to be light and approachable. When I found this image–complete with a pop of color in the crazy pink high heels, I knew I’d found the perfect cover. (My instant attraction to this cover also had to do with the fact that I owned this exact dress in high school, myself!)

For my debut with Love Inspired, Saving Gracie, Harlequin’s fabulous art department took my art facts sheet–several pages of my notes on the physical appearance of Gracie and Jake, descriptions of the Victorian era home Gracie had converted into a school, and much, much more–and created a glimpse into Gracie and Jake’s world. I had no idea what they would ultimately use as a cover and when the final design was e-mailed to me, I was thrilled. It was so amazing to me how they took my notes and created such a perfect scene. I love everything about this cover, especially the warm and inviting feeling I think the yellow overtone conveys.

Another cover I’m crazy about recently belongs to my friend Jessica Keller’s new release, Saving Yesterday. The motion of the girl’s hair and the colors let you know immediately that something’s shifting. You’re dra

wn into the story before it even starts.

Book covers can also help you visualize the characters, like the Daisy, the heroine in Virginia Carm

ichael’s Leaving Liberty. She’s featured front and center on the cover, and you feel like you know her as soon as you see her.

I’m a big fan of Diana Gabaldon’s Outlander series, which is now being made into a TV series. Outlander has generic covers, with no character pictures on them, and now that the TV series has been cast, everyone has opinions. Just yesterday, the author herself posted a photo from the set of the filming. One reader lamented that the actor playing the hero, Jamie Fraser, looked nothing like Jamie. I cracked up when I saw Gabaldon’s personal response to that Facebook comment–“Oh, he fits the written description quite well. He may not fit your mental image, but that’s between you and your imagination. <g>”

What about you? What makes a cover stand out to you? What type of cover do you prefer–a cover with pictures of the hero and/or heroine, or something more generic like a scene or landscape featured in the book?

I'm an author of inspirational and sweet contemporary romance stories of love, laughter and happily ever after and the Mama behind the Real Time Mama blog at www.kristenethridge.com, where I talk about food, family, faith, and fiction. My first book, Saving Gracie, came out from Love Inspired in February 2013 and I'm represented by Elaine Spencer at The Knight Agency. A devoted Baylor Bear, I live in North Texas with my husband, two redheads, and a self-important poodle. I love interacting with readers, so join me on my blog, on my Facebook author page, on Pinterest, and on Twitter.