I’m excited to invite Kara Isaac back to tell us about her upcoming release, Then There Was You! 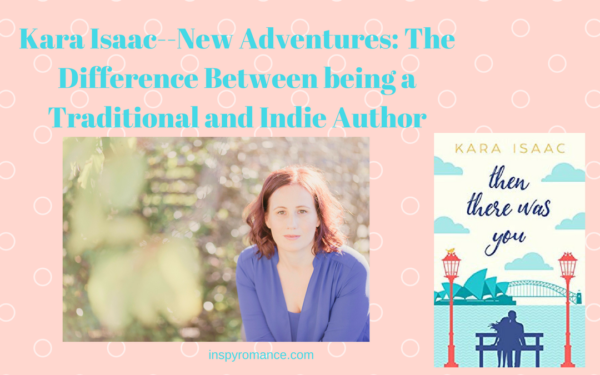 Good morning, Inspy Romance, and thanks so much to Janet for hosting my visit today! :)

You’re welcome! Tell us about your “new adventure.”

In six days, my first indie (independent) release, Then There Was You, heads out into the big wide world. After two traditionally published novels (Close To You and Can’t Help Falling) I thought it would be fun to talk about some of the differences I’ve discovered between working with a traditional publishing house and being my own publisher!

How exciting! What  differences have you discovered?

Total Control / ALL the Responsibility:

Being an indie author means total control! You are the final decision maker on everything from cover, to back cover blurb, to distribution channels. This is both great and terrifying! There is no one chasing you up to make sure things are done by specific times and no contractual obligations to motivate you to meeting milestones just your own internal motivation. If a step is missed or something doesn’t get done it’s your responsibility to notice it and fix it.

If the cover doesn’t hit your target reader demographic, if the back cover copy doesn’t engage them, if a promotional activity doesn’t pay dividends, it all comes back to you.

Right! That can be fun and scary!

You Get To Pick Your Team:

I am so blessed that I got to work with an incredible team at Howard Books and am so grateful for the experience. Being an indie meant I had to pick my own team! For Then There Was You this included a developmental editor, a copy editor, a proofreader, a cover designer and a formatter.

I had worked with my developmental editor and proofreader before, my cover designer’s work I had admired on a couple of author friends’ indie releases, my copy editor I knew from writing circles and my formatter was a recommendation from an indie friend. They all did incredible work and getting Then There Was You to this point wouldn’t have been possible without them!

Love your cover! And formatting paperbacks is no joke! (I may have to get that name from you later.)

You find out how much REALLY happens behind the scenes:

Being an indie author for the first time is a many months exercise in discovering how much you really don’t know! From getting an ISBN for your book, to navigating tax requirements, to making decisions from pricing to the color of pages, to getting advance copies to early reviewers, you’re it when it comes to navigating from the first draft right through to release.

Thankfully the indie author community is a very helpful supportive one and people are always willing to point you in the right direction or share their expertise and experience.

All the picking out is kind of like building a house. Yes, the indie community is so supportive, as is the Christian fiction community as a whole.

It’s YOUR money on the line:

My primary motivation for going indie was that with two novels releasing in 2016 I wanted to have a 2017 release to maintain momentum with readers and (for a variety of reasons) that wasn’t going to be possible with my traditional publisher.

When I made the decision to independently release Then There Was You there was one thing I was determined about. That it would go through the same level of rigor and be of the same quality as my two traditionally published novels. That meant that I had to be willing to make a significant financial investment to pay for professionals to do the things that I couldn’t – cover design, formatting and copy editing. Fortunately my developmental editor accepted payment in the form of New Zealand coffee and chocolate and my proofreader is a friend who did me a favor :)

All of these things were covered by my traditional publisher. Being indie means paying the bills and watching the $$$$ disappearing out of our bank account!

But there’s no point having a well-edited book with a beautiful cover if no one knows about it! So, on top of those things I needed a budget for promotional activities, marketing, review copies, giveaways etc. I keep telling my husband you have to spend money to make money ;-)

LOL, I’ve been there–making sure you can prove a return on the investment for the husband!

#giveaway TWO #Kindle eBook copies of Then There Was You to give to two lucky commenters! #InspyRomance Kara Isaac

Thank you so much for having me here today! I have TWO Kindle eBook copies of Then There Was You to give to two lucky commenters (also a bit of shameless promotion the eBook is also on a preorder special of $3.99 until midnight on the 21st :)  I will be popping back in to respond to comments/questions later in the day (thanks to the time difference with New Zealand I don’t even wake up until the US is well into the afternoon) and I’m also juggling three small people so please bear with me if it takes me a couple of days to reply!

I’ll try to be patient, ha! Thank you so much for your generous offer. No worries about the promotion! I know our readers will be excited to order.

Here’s a little bit about Josh and Paige’s story… 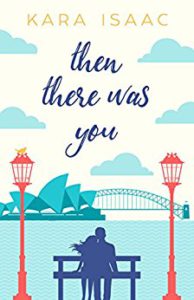 Then There Was You

Paige McAllister needs to do something drastic. Her boyfriend can’t even commit to living in the same country, her promised promotion is dead on arrival and the simultaneous loss of her brother and her dream of being a concert violinist has kept her playing life safe and predictable for six years. Things need to change. A moment of temporary insanity finds her leaving her life in Chicago to move to Sydney, Australia. There she finds herself, against many of her convictions, as a logistics planner for one of Australia’s biggest churches, and on a collision course with her boss’s son.

Josh Tyler fronts a top-selling worship band and is in demand all over the world. But, in the past, his failed romantic relationships almost destroyed both his reputation and his family. He’s determined to never risk it happening again. The last thing he needs is some American girl tipping his ordered life upside down. Especially one who despises everything he’s ever worked for and manages to push every button he has.

When Josh and Paige are thrown together to organize his band’s next tour, the sparks fly. But can they find a way to bridge the differences that pull them apart? Or will they choose the safety and security of what they know over taking a chance on something that will require them to risk everything?

Sounds amazing! I can’t wait to read it! 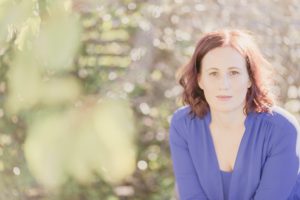 Kara Isaac lives in Wellington, New Zealand. She is the author of Close to You, a RITA Award Double Finalist, and Can’t Help Falling, an RT Review Top Pick. Her next book Then There Was You releases on June 22. When she’s not chasing three adorable but spirited little people, she spends her time writing horribly bad first drafts and wishing you could get Double Stuf Oreos in New Zealand. She loves to connect on her website, on Facebook at Kara Isaac – Author and Twitter @KaraIsaac

Kara Isaac
Romantic Comedy Writer
RITA Award® Double Finalist
Close To You & Can’t Help Falling
Available now from all great retailers
Sign up to my newsletter for exclusive news and giveaways
Website
Twitter: KaraIsaac
Facebook: Kara Isaac – Author
Thank you so much, Kara, for hanging out with us! READERS, Leave a comment by June 20, 2017 to be included in the giveaway!