As I sit here in bonnie Scotland, what more appropriate subject to blog about today than our brave heroes in kilts. Say the word ‘kilt’ and it conjures up images of Mel Gibson and Braveheart, or Liam Neeson in Rob Roy. Or how about Diana Gabaldon’s Outlander hero, Jamie Fraser? What woman reader doesn’t love a hero in a kilt?

My sister’s grandson was recently one of the four groomsmen at his brother-in-law’s wedding. But instead of the usual suits or tuxedos, as is common wedding attire in South Africa for the Bridal Party, the groom and groomsmen were all dressed in kilts. He said the kilt was so comfortable and he felt good wearing it. Doesn’t he look good enough for a book cover? 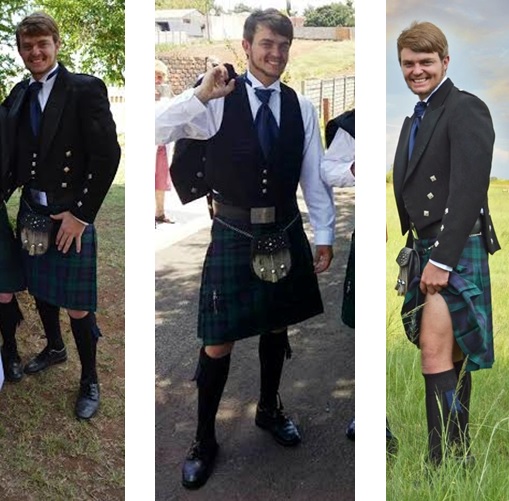 On June 22nd, my third Passport to Romance novella, Glasgow Grace, releases. I loved writing this story set in Scotland, and do I have an awesome hero for readers in Callum McGuire? Complete with kilt (in one scene…but I’m not letting out which one). I will, however, give you a snippet from the story that involves a kilt.

Callum’s lips parted in a smile. “Guess that’s why we were crowned prom king and queen.” Good move on his part to return to the previous conversation.

Skye nudged him in the side with her elbow. “I think it had more to do with you being Mr. Popular in your school.”

“Oh, I think we would’ve had the same problem at your school had your mother allowed me to escort you.” He exhaled. “We know that was never an option for her—me, taking you to your debutante’s ball…”

Skye placed her hand over Callum’s. Until now his had remained only close enough to let her know it was there. Was he waiting for her permission to explore what had been so natural to them as teens? She took the lead and entwined her fingers with his and squeezed. “Da would have let you, but by then he was so ill, no fight left in him to argue any longer with his Rita over you.” She gazed into his eyes. “I wish you had taken me. You would’ve looked dashing in a kilt.”

“Well, you did look amazing in your white ball gown.”

Callum’s mouth lifted on one side. “I stood in the shadows opposite your house that night, waiting to catch a glimpse of you.”

“I know. I felt too foolish the next day. Like a stalker. So, I kept quiet about my lapse into jealousy. I—it was the first time you had been out with anyone but me.”

“And I hated it. Thought of you all night long. Imagined it was your arms holding me as we danced.”

“I spent the night brooding about how much I wanted to kick your kilt-attired escort in his tush.”

Laughter burst from Skye’s mouth. “That would have put new meaning to the Highland fling. I’m very glad you didn’t—you could’ve revealed to the world what a Scotsman wears beneath his kilt.”

What do you think of men in kilts? Do you know of any kilt heroes you can share with us?

I’ll be giving away an eCopy of Glasgow Grace to one reader who leaves a comment on this blog by Friday, 24 June. Here’s the blurb for my first Scottish story. 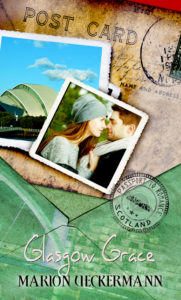 Opera star, Skye Hunter, returns to the land of her birth as leading lady in Phantom of the Opera. It’s the first time she’s been back to bonnie Scotland since her mother whisked her away to Australia sixteen years ago after Skye’s father died.

When Skye decides to have dinner at McGuire’s, she’s not going there only for Mary McGuire’s Shepherd’s Pie. Her first and only love, Callum McGuire, still plays his guitar and sings at the family-owned tavern.

Callum has never stopped loving Skye. But, desperate to know if she’d want him if he was still a singer in a pub, he keeps his real profession hidden from her. When Skye’s worst nightmare comes true, Callum discloses his secret to save the woman he loves.

Can they rekindle what they had lost, or will Skye’s mother threaten their future together once again?