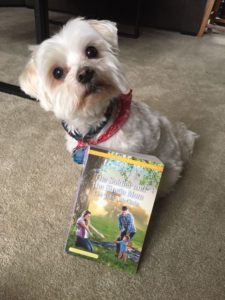 Porter with “his” book

If you’ve read any of my books, you’ve probably realized that I love dogs. From Bear the Goldendoodle in my Arcadia Valley books, to A Dog’s Last Chance Animal Rescue in my Rescue River series, to the ranch for veterans and senior dogs in my upcoming Redemption Ranch series… they’re everywhere. I’ve blogged here before about The Dogs of Romance.

What happens when a dog-loving romance writer loses her best friend?

Last week, we lost our sweet little Maltese mix, Porter. Or wait… was he sweet? Sure, except when he was dominating our cat… or sneaking onto the school bus… or attacking a Rottweiler. Porter was a big personality in a ten-pound package, and he’s been an important part of our family life. Even when my daughter and I were completely at odds during the storms of her adolescence, Porter could make us laugh. And when there was a bad grade or a rejection letter to get over, Porter was right there, wiggling closer and closer to our sides, letting us know that he loved us even when the rest of the world seemed judgmental and harsh.

I’m the type of writer who moves around the house. I’ll write a few pages in bed, then a few at my desk, then settle down at my dining room table to finish the chapter. Porter had a bed, blanket, or pillow in almost every room of our house. He dutifully followed me from spot to spot, settling down beside me with a doggy sigh, keeping me company. When he got old and tired and arthritic, I’d try to reason with him: “Don’t get up, I’ll be back in two minutes!” But he would trudge after me anyway, wait for me to brew my coffee or find a reference book, and then follow me back to whatever “desk” I was using. 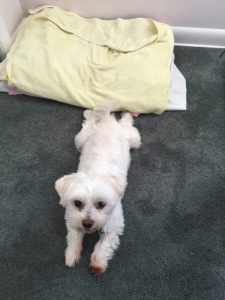 Porter’s bed in my study

My writing days will be a whole lot lonelier now.

I’m so glad that I put Porter into one of my books, under the name of “Spike.” In The Soldier and the Single Mom, my big, tough hero struggled with alcoholism. He had a special relationship with Crater, one of the big dogs at A Dog’s Last Chance. But a little white mop of a dog, given up by a struggling owner, made his way into Buck’s heart as well. Here’s what happened one difficult evening when Buck went out to the rescue to pick up his favorite big dog, Crater:

The dogs continued barking, of course, and he got drawn into petting some of the needier ones. When he saw Spike, the Maltese mix from the alley the other day, he opened his crate, picked him up, and carried him around. He’d turned out to be healthy enough, just your average senior, overweight dog with bad teeth. But with his matted hair shaved off, he was a little guy. He didn’t fit in with the bully breeds that made up most of the population at the rescue.

“But somebody loved you, huh?” He rubbed behind the dog’s ears, thinking of the note and the few dollars that had been with Spike when he was dropped off.

The dog licked his face gratefully.

“Your breath smells worse than a garbage dump,” he chided the old dog.

Finally he got to the kennel he’d been seeking. There was Crater, in the back of it, licking his paws. When the dog saw Buck, he came bounding forward.

Buck opened the kennel awkwardly, still holding the Maltese. “Hey, buddy,” he said. “Want to come home with me tonight?”

He only did that on the bad days. His sister hadn’t bargained for a big, clumsy dog in her house. But she knew he needed the company sometimes.

Crater trotted confidently beside him, mouth open, tongue hanging out. He seemed to laugh at the other dogs, still in their kennels.

When they got back to Spike’s small crate, Buck bent down to put the little guy in.

Spike struggled, looking up at him with big, dark eyes, letting out pitiful cries.

“I don’t even like small dogs.” Firmly, he shut the crate and headed for the door.

Above the noise of the other dogs, he could hear Spike’s high-pitched howl.

All the dogs were barking. All of them needed a home. He was giving one of the unadoptables an outing, that was all. He reached down to rub Crater’s head and the dog stared up at him adoringly.

Crater looked at him quizzically.

His steps slowed. He turned around. Then he jogged back to Spike’s cage, opened it and swept the fat Maltese into the curve of his arm. “One night on a real bed. Just one, you hear?”

Twenty minutes later, as he let himself into the guesthouse and went upstairs—Crater beside him and Spike in his arms—he realized he hadn’t even considered taking the turnoff for the bar.

Just like Spike in the excerpt, Porter pushed his way into my chaotic life and made it better; he will always be part of my family’s story. In his honor, I’m giving away a copy of The Soldier and the Single Mom. Just comment today to be entered into the drawing.

What happens when a dog-loving writer loses her best friend?