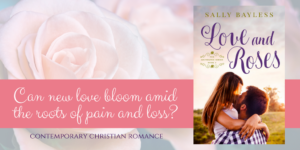 I have had the privilege of reading each of contemporary romance novelist Sally Bayless’s books, and today I get to share an excerpt with you from her latest book, Love and Roses, which releases Thursday, March 1st. The best  author I can think of to compare Sally to is Susan May Warren and her small-town setting books. Sally does a great job of creating more than one story line to hold your attention, and her characters have sweet romance with real issues they have to overcome. Sally’s a pleasure to read, and I hope you’ll enjoy this sneak peek into her latest.

Can new love bloom amid the roots of pain and loss?

Young widow Abby Kincaid treasures the past, both the antiques she sells in her shop and the tender memories of her late husband. When she learns that her hometown plans to sell historic Rose Park, a place central to her marriage, she vows to stop the sale.

Nate Redmond, a former Manhattan lawyer, is eager for a fresh start in small-town Missouri. With his extensive background, arranging the sale of outdated Rose Park for retail development looks easy, the perfect way to help the town fund the larger recreational space it needs. His role in the deal might even impress Abby, the pretty new neighbor he feels so drawn to.

But as Nate and Abby clash over the park, more serious obstacles threaten their relationship. Mistakes that Nate had hoped to forget continue to haunt him. Abby comes face to face with her failure to forgive. And how can Nate compete with the memory of a decorated war hero?

When the park battle brings on a crisis, can they each find the courage to believe in a God of second chances and a future where their love can grow?

Excerpt from Love and Roses 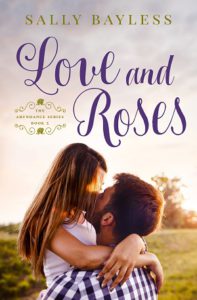 Abby Hamlin Kincaid washed the granular fertilizer off her hands in the kitchen sink, then walked through the storage area and into her antique shop. She sat down at the computer on the desk behind the counter and checked her online store. Fabulous! She’d sold the milk glass punchbowl. As soon as payment cleared, she could package the bowl and send it to its new owner.

But hold on…She went to the bottom of the stairs and leaned her head over the rail, one ear cocked toward the second floor. Before she’d gone out to take care of her petunias, she’d told Emma she could watch one show, an educational cartoon. Music for a program aimed at older kids trickled down the stairs from the family room on the second floor.

“Emma, you need to turn off the TV and come downstairs. It’s time for us to fix lunch.”

Abby started up the stairs. Apparently it was also time for a reminder that when she said one TV show, she meant only one.

The cowbell on the front door clanked.

Oh, a customer. She’d be right down to help them as soon as she got Emma. Abby turned on the stairs to invite them to look around—

And nearly lost her balance.

Emma stood in the doorway beside an enormous black dog and the guy who’d been moving in next door.

“Are you missing someone?” The man angled his head toward Emma.

“Emma,” Abby gasped, her heart caught in her throat. She rushed down the stairs and pulled her daughter close. “I—I thought you were upstairs watching TV.”

“I went next door to see the dog.” Emma’s voice didn’t hold a single note of guilt, as though leaving the house on her own was something she did every day.

Abby leaned down and looked her in the eyes. “You did what?”

“I saw the dog out the window. He looked sad.”

“Sad?” Abby’s single word came out in what might have been a screech.

Emma shrank back, and the man’s eyes widened.

Okay, so it was a screech. But Emma was three years old. She’d left the house all by herself. Crossed the alley. Gone into a stranger’s apartment.

And Abby hadn’t even known.

This guy had brought Emma back. What if he hadn’t?

“Bear probably did seem sad.” The man looked as if he wished he was somewhere else. “He’s had a rough time. I just adopted him this morning.”

Abby studied the dog more closely. That explained why a guy who seemed like he’d own a purebred with a coat that gleamed instead held the leash of a mutt with fur that hadn’t been brushed in weeks. It didn’t explain what her daughter had been thinking or—

“I’m Nate Redmond, by the way.” The man stuck out his hand.

“Oh.” Abby shook his hand. “Abby Kincaid. And I guess you’ve met Emma. I’m so sorry. She is a little adventurous, but always before when I’ve let her watch TV, she’s been totally engrossed.”

“I guess you’ll have to set some clear boundaries, so she doesn’t wander into traffic and get hurt.”

His words, by themselves, might not have been so bad, and considering what had happened, might even be justified. But something about his tone implied that he knew more about raising her child than she did.

Based on what she’d heard about her new neighbor, though, she doubted it. Neva, the owner of the flower shop, had said her new tenant was single, no kids, never married, all of which the florist had mentioned more than once while giving Abby a pointed stare.

Abby had ignored her.

A relationship was the last thing she needed. People kept trying to set her up, saying it had been a long time since Eric died, suggesting that God might bring her a second chance at love. But she wasn’t interested.

Particularly not in someone who didn’t even seem like he’d fit in around here. She re-centered her wedding and engagement rings on her finger and studied the newcomer. A navy polo and khaki shorts. Brown hair, dark blue eyes, and short stubble over a chiseled jaw. This guy belonged in a magazine ad for preppy sportswear, hanging out on some expensive sailboat. Not in her sweet little hometown.

Emma sidled back over to the dog and petted his head.

Abby put a hand on Emma’s shoulder and steered her back beside her.

Abby turned to Emma. “What?”

“Flyover Country.” Emma tapped Nate on the arm. “Isn’t that what you said?”

Abby raised her eyebrows at Nate. So he was one of those folks who thought people in the middle of the country weren’t worth noticing. Definitely not going to fit in.

He at least had the courtesy to look guilty.

“We’ll talk about it later, pumpkin.” Abby turned to Nate. “Thank you for bringing Emma back.”

The dog began to whine.

“It sounds like Bear and I need to leave,” Nate said.

Emma waved to the dog as they walked away, and Abby closed the door. Time to have a serious discussion with her daughter and come up with the right punishment—something that wouldn’t be cruel, but would definitely get the point across that leaving the house alone was a very bad thing to do. Nate’s concern that something could happen to her was all too valid, and Abby couldn’t bear it if something happened to Emma. Couldn’t even think about it.

Would it work if she put Emma’s toy kangaroo in timeout for the day? If she took away TV for a week? Abby would figure it out.

And she’d put a cowbell on the side door and the door that led to the screened-in porch as well.

Because, no matter what her new neighbor thought, Abby was a good mother.

Interested? I hope you’ll preorder your copy of Love and Roses. It’s only $2.99, which is a great price for a great read. But do preorder! On March 1 the price goes up.

Have any questions for Sally? She’ll be stopping by today in the comments. 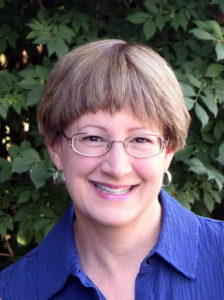 Sally Bayless was born and raised in the Missouri Ozarks and now lives in the beautiful hills of Appalachian Ohio. She’s married and has two grown children. When not working on her next book, she enjoys reading, watching BBC television with her husband, doing Bible studies, swimming, and shopping for cute shoes.