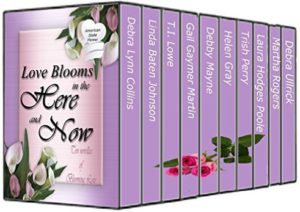 Hey Y’all! I’m excited to share with you the newly released boxed set that my novella, Camellia’s Smile is included in. If you missed my first post, I’d like share with you a little bit about the American State Flower collection. Each novella in this set has the state flower included in each title. This is the brilliant idea of Cynthia Hickey with Forget Me Not Romances, a division of Winged Publication. Love Blooms in the Here and Now is the contemporary collection.

Romance and flowers go together like an avid reader and a good story. These ten contemporary romance novellas center around a state flower and love. Curl up with your reader and see love bloom in the midst of adversity in America’s present. Some recipes included.

Love Blooms in the Past is the Historical collection. 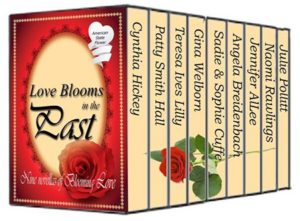 Romance and flowers go together like an avid reader and a good story. These nine historical romance novellas center around a state flower and love. Curl up with your reader and see love bloom in the midst of adversity in America’s past.

The Forget-Me-Not Authors has covered 19 states as of right now. But, I’m happy to announce in 2017 the remaining states will also be done. That’s right, there will be a novella for all 50 states! :) 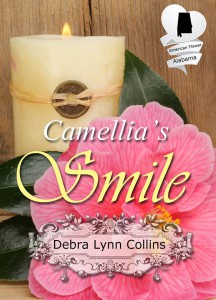 Suddenly it dawned on her what she had to do as her gaze caught on her granddad’s gun cabinet. He had taught her how to shoot a gun when she was just a young girl, and she had gone hunting with him more times than she had fingers and toes. He even bragged about what a great shot she was. Maybe, just maybe, she could sneak up on the man and at least hold him at gun point until the police got here.

She knew the operator wanted her to remain on the phone with her until the police arrived, but Camellia decided to take matters into her own hands. After all, she couldn’t just wait here like a frightened child hiding under their bed. This man had to be stopped, and she was the only one who could stop him.

She pushed the off button on the phone and raced over to her granddad’s gun cabinet.

With a turn and a click of the key, she unlocked the gun cabinet, took out one of the shotguns and a box of ammo, and quickly loaded the gun. “Father God, give me strength and courage to do the right thing.”

Easing out of the front door, while the man was inside the barn, she tipped-toed around the back of the truck. Her heart pounded so loud in her ears, she was afraid the man would hear it. She peered into the barn, thankful he had his back to her and was bent over about to pick up another bag of feed. One step at a time, she crept up behind him, and stopped several yards from him so that he couldn’t snatch the gun out of her hands.

She lifted the gun and pointed it at him. “Hold it right there. Don’t move. I have a gun aimed at your back. Now, I want you to slowly put your hands up in the air so I can see them. Do it now!” It took everything inside of her to keep the tremble out of her voice. Only problem was, the tremble showed up in her knees instead. Good thing he had his back to her and couldn’t see them.

She swallowed hard as reality crashed in on her.

What was she doing?

Could she really shoot this man if he charged her?

The man didn’t say a word. Instead, he did as she asked. He slowly straightened and raised his hands above his head.

She took a step back, knowing she had to continue to keep her distance because he was at least six foot tall and looked to be very muscular from the way his t-shirt fit. The man could very easily overpower her five-foot-four frame.

His body flinched, and Camellia’s knees went from a tremble to shaking so violently that she feared they would buckle under her. “I said don’t move. Do you want me to shoot you?”

“Nope, I don’t think I feel like dying today. Can I at least turn around so I can see who’s holding me at gun point?”

“You can turn around but do it slowly and no funny business. I do have a gun, and I can assure you, I know how to use it.” This time, Camellia couldn’t keep the shakiness from her voice. She just hoped the thief hadn’t noticed that fact.

He circled around slowly and looked directly into her eyes. He didn’t look anything like she pictured a thief would look like. His classically handsome face took her by surprise as he stared at her with eyes as dark as the night. His clean-shaven jaw and silky short-cropped dark hair would make any movie star jealous.

“I don’t know who you are,” he said, “but if you’re going to rob me, I can tell you, you won’t get much. All I have is forty dollars in my wallet, but you’re welcome to it.”

“Rob you?” She drew in a deep, steady breath and matched his glare. “Aren’t you the funny one? But you won’t be laughing in a few minutes.”

(This is the scene where Camellia and Brody first met. Boy, you talk about a first bad impression :)

When I first met my husband, it wasn’t anything like this, but it was somewhat unique. His brother and I had a date and his brother’s car had broken down, and he had asked Steve to bring him to my house. (big mistake for him) If you ask me if I believe in love at first sight, I would say, YES, YES, YES.

I fell in love with Steve when I first laid eyes on him. That night, I ended up going out with him instead of his brother :) That was 35 years ago, and I still have stars in my eyes when I look at my own Prince Charming.

Now, here’s a question for you. How did you first meet the love of your life?

Leave a comment before midnight Sunday June 4 for a chance to win a signed paperback copy of, Camellia’s Smile.