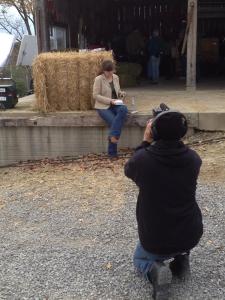 Signing books for the cast…and being filmed for the DVD.

When you get to watch your dreams come true, it’s truly an amazing thing.

I’d heard talk for a few months that my book Love Finds You in Charm, Ohio, was going to be the second in the Love Finds You Series to become a movie. 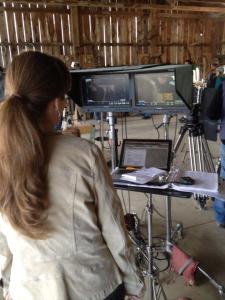 I stood behind the director and watched as the book came to life.

And a couple of weeks ago, when I spoke on the phone to the producer, it finally became a reality. He was already in Sugarcreek (they are filming there rather than Charm because of the varied locations they are able to use there). He let me know how long the shoot would last and that they would welcome me to the set—in fact I’d need to be there some to film some things for the behind-the scenes portion of the DVD! 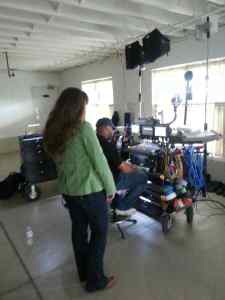 Watching from the sound booth. We got our own headsets to wear so we could hear!

My husband and I arrived to the set on day five of the three week shoot, and were immediately made to feel welcome. We arrived between takes on a scene where Emma introduces Kelly and Noah. (If you’ve read Love Finds You in Charm, you know exactly who these three are!) Hearing the actress say “This is Kelly Bennett” and watching the interaction between the three of them brought tears to my eyes!

These were characters I dreamed up—characters I lived with while I wrote the novel. Their quirks and personalities were things I created. And to watch them come to life is a totally incredible feeling.

The location manager told me later that he’d been watching my face as I saw that first scene. He remarked about the emotion he saw there and how he had experienced a very similar look last year when Serena Miller saw her Love Finds You in Sugarcreek being filmed for the first time. 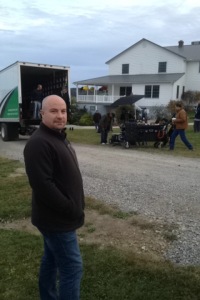 Johnny on set for an all night shoot.

The whole process is a dream come true for me. It’s exciting, but it’s also still a little unreal. Johnny and I will travel back to Ohio next week for the last few days of filming. If all goes as planned, we’ll get to actually be in the movie while we’re there! It will definitely be one of those things we’ll always remember. (and perhaps will provide a photo op that will become our Christmas card!)

Watching how they took my book and based a movie on it is really interesting. I read the script and although there are definitely changes, I can see how those changes were made to enhance the movie—things there need to be larger than life on screen. Where I may have several pages of dialogue and description, they need to convey the same emotions and meanings in a much shorter time.

And while I’m normally an “I prefer the book to the movie” kind of person…this time I suspect both will hold equal places in my heart!