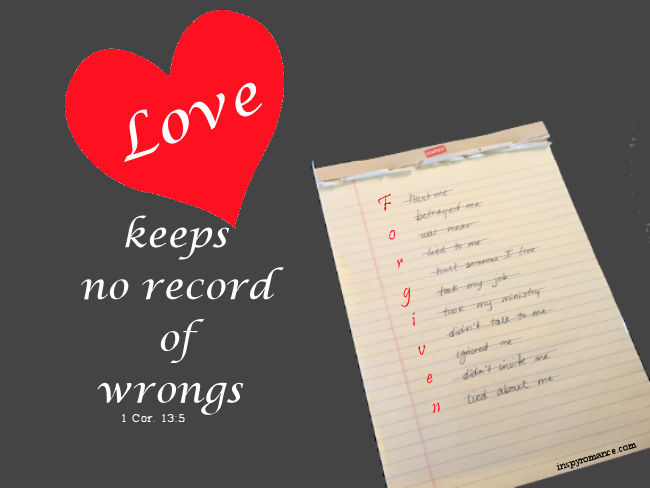 Being who I am, I had planned to do this in the order in which they appeared in the verses. Makes sense, right?

Yeah, well… God had other plans, so I’ve skipped ahead a bit. I’ll get to all of them at some point (or at least I plan to).

Depending upon which version you read, this could say, “it’s not resentful” (ESV), “thinketh no evil” (KJV), or other similar variations.

Since they seemed to be so different, I looked at the original Greek.

The word translated as “record” is the word logizomai. It means to recon, count, charge with; reason, decide, conclude, think, suppose; to take into account or to reason to a logical conclusion (decision).

“Of wrongs” is from the Greek word kakos, meaning bad, evil; inwardly foul, rotten (poisoned); or (figuratively) inner malice flowing from a morally-rotten character. (The above found at www.biblehub.com)

So how should we truly interpret this section of the verse?

I like the simple translation above. Of course, it’s how I learned it. I’m not discounting any of the others because I think God’s Word reaches us where we are. Today I need to remember to keep no account of wrongs.

But, oh how hard it is sometimes.

Have you ever been there? A place where someone has hurt you beyond your wildest dreams or worse, hurt someone you love?

I can handle the hurt to me. Somehow it’s easier to forgive and move on. When someone I love has been hurt, I struggle. Because I see their pain. And I don’t want them to hurt. I want to make it better. And yet, I can’t. Nothing can change what has already been done.

I went in search of a few quotes… 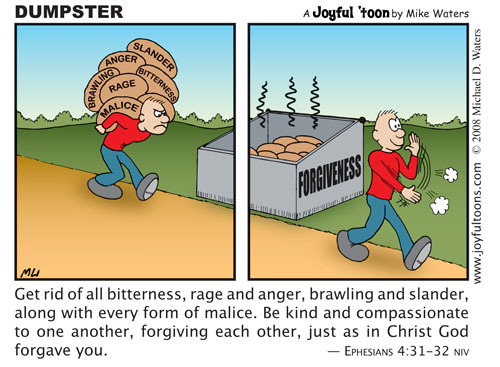 Used by permission by Mike Waters at www.joyfultoons.com

This cartoon says a lot with few words.

Take a moment and think about the weight of those bags on his back.

Have you put your anger, malice, rage, slander, etc in the forgiveness dumpster? Have you forgiven the person who hurt you or the one you love?

Love demands that we keep no record of wrongs.

Psalm 103:12 tells us that God “has removed our sins as far as the east is from the west.” Aren’t you thankful that He doesn’t keep a record? In Micah 7:18-19 we find this encouraging section, “Who is a God like you, pardoning iniquity and passing over transgression for the remnant of his inheritance? He does not retain his anger forever, because he delights in steadfast love. He will again have compassion on us; he will tread our iniquities underfoot. You will cast all our sins into the depths of the sea.” [emphasis mine]

I do not write these words only for you. God knows how much I NEED this right now. And sometimes, we have to SAY we forgive and say it again and again until the feeling joins the decision. Even if the person never asks for it. Ever.

The memory and sometimes the hurt don’t go away, but the anger and bitterness—that which harms YOU more than the offender—are washed clean, leaving only peace. Blessed peace.

And the weight lifts, leaving you feeling FREE.

If you need prayer for this area, please comment below or send me a personal e-mail through my website’s contact me page. I am ALWAYS happy to pray with you. Where two or more are gathered (even in cyberspace)…