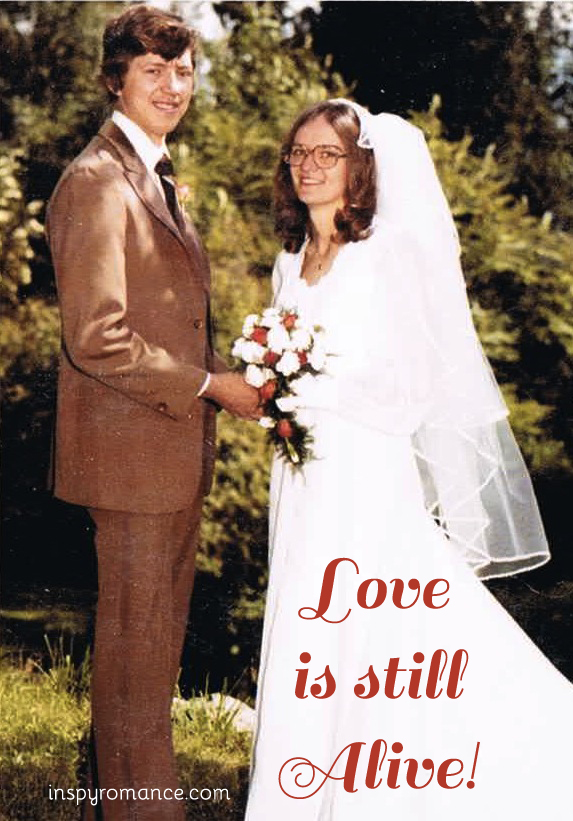 “You’re too young to think of marriage.”

“You guys must have been cradle robbers!”

Thirty-five years ago, on August 30, 1980, my husband and I said our marriage vows to each other. I was 21. He was two months shy of that mark. Four months later we were expecting our first child. Two and a half years after her birth, her younger brother joined our family.

Would I do any of it differently? I honestly can’t say that I would, even though there have certainly been ups and downs. We agreed that it was important for our kids to have a stay-at-home mom when they were young. Our early years were very lean financially, but neither of us had been raised with a lot of money, so we accepted that and made do. Here are some of the things we learned along the way.

#Love is still alive! What we’ve learned along the way…

• Romance is nice, but being there for each other is better. There haven’t been a lot of flowers, jewelry, chocolate, surprise dates, or exotic vacations in my life. That’s fine by me. Really. (My love language isn’t “gifts!”) We both value hikes in the woods or hunting for shells on the beach or talking on long road trips more than romantic trappings.

• Communication is vital. Men’s brains and women’s brains are very different places, but if you actually talk to each other and explain, as best you can, why something makes you feel the way it does, you stand a running shot at understanding each other. If not exactly understanding, you’ll at least know that strange idea is important to them.

• The only way out is through. Are there grounds for divorce in this world? Absolutely… and I don’t have them. Life may not always be sunshine and roses, but there is no abuse and no infidelity. We are agreed that marriage is a sacred vow. While it only takes one to leave, it does take two to stay together.

Lessons of Life and Love from @ValerieComer

• Marriage and family are worth any sacrifice. For the first twenty-some years, our decisions revolved around the common good. There was little room for individual endeavors, especially if they took much time or finances from the family. By the time the kids left home, finances had improved (not entirely cause and effect!), but the habit sticks. We rarely spend significant money on anything that will only benefit one person, and never without consultation.

• Respect each other. Celebrate differences and encourage each other. No, this is not incompatible with the previous idea. Allow each other the space to be the individual God created him or her to be. We’re both introverts, which might make it easier. We’re both eager to get out of loud, busy places and find solitude or companionable silence. If we were one of each, we’d find a balance. Stick up for each other. Don’t badmouth him to the girls.

• Share faith. Having a common belief in God’s word, salvation through Jesus, and hope in life eternal keep us pointed in the same direction and provide an additional depth of intimacy.

Like most contemporary romances, my stories focus on the emotional roller coaster found in the weeks and months of getting to know one another, falling in love, and committing to a relationship. One of the things that’s great about writing in series, though, is showing the previous characters at progressive stages.

This has been especially fun in the Farm Fresh Romance series, where about five years have passed in story time between the first book, Raspberries and Vinegar, and the sixth one, Berry on Top, which I’m currently writing. Earlier characters are married and in some cases have children. Some of the luster has faded, but I like to think readers can sense the deepening commitment in the earlier couples as the series progresses. They’ve learned some life lessons and are willing to share them with each other.

What are some of the lessons of life and love you have learned?