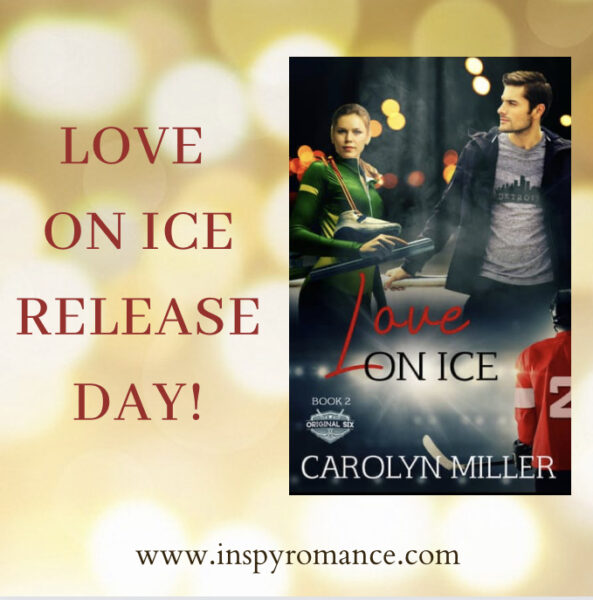 Wow! I can’t believe it but it’s finally release day for Love on Ice, the second book in my new Original Six contemporary romance series, about players from the original six teams of the National Hockey League and their paths to romance.

This book has been over a decade in the making (and actually kicked off my writing journey!), after I watched the closing ceremony of the 2010 Vancouver Winter Olympics and was intrigued when I saw an Australian female athlete enter the stadium holding hands with a North American male athlete. What was their story? How could two people from opposite ends of the earth meet, let alone sustain a relationship, given the gruelling nature of elite sports, training, study, work commitments and balancing that with all the challenges of living multiple time zones apart? Despite my best efforts I couldn’t find out who they were, so I made up ‘their’ story.

The Aussie became Holly Travers, a short track skater (because I wanted to avoid the cliched figure skater, and short track is insanely tough!), and the guy became Brent Karlsson, a Canadian hockey player, who plays for Detroit in the NHL. (My original version had him play for Chicago, but I changed things to make my Chicago setting for the third book in the series, because…reasons)

Here in Australia we love our sport, but winter sports is something we really only focus on once every four years, when the Winter Olympics occur. Despite this, we’ve had more than our fair share of World Cup wins and Winter Olympic glory, which is pretty good considering we’re a country that experiences WAY more sunshine than (usually artificial) snow. I think Aussies who have a passion for these kinds of winter sports are amazingly inspiring. You have to be when you’re forced to train overseas for much of the year, and most athletes require jobs to pay their way, as government funding support is pretty limited. So Holly is someone who’s passionate about her sport, but finds her commitments to work and study eat into her training time – let alone her time for anything more.

Contrast this to Brent, one of the NHL’s hottest forwards, complete with millionaire status, sponsorship and endorsement deals galore, and a bevy of adoring fans which means he’s now trying to live down his reputation as a player. I think we all know people who have struggled to shake off poor choices and prove themselves to have changed. Brent is similar, except he’s in the spotlight, so anything he does is magnified and can easily be misconstrued – especially when it’s reported as ‘fact’ in online fan forums.

Brent is Holly’s best friend’s twin brother, and Bree (who we met in last month’s release The Breakup Project) hasn’t exactly been shy about her brother’s reputation with the ladies. Brent might say he’s changed, but Holly struggles to trust him – something made all the harder by the fact they live so far apart. How can he prove he’s a changed man when he never sees her? She knows she’s not the type of girl he usually goes for – should she even let herself get distracted when her coach just wants her to focus, focus, focus on training?

I’m so thrilled by early readers saying they loved this book: “a fantastic page turner,” “I just love the characters and the conflict. Talk about a swoonworthy book,” “Absolutely loved the faith thread in this story,” “adrenaline, chemistry, romance and lots of wooing!” and “I never thought I’d give 5 stars to a book about ice hockey and speed skating!” It’s definitely been a lot of work, carving my original 155k words into a more manageable 98k, but this inside peek into what it takes to be a Winter Olympian is something I hope readers enjoy, especially with the Winter Olympics due to be held next week.

I do hope you’ll check out this story!

Here’s the back cover copy:

She’s focused on winning gold. He wants to lose the player tag. Can a fake relationship become something real?

Aussie short track skater Holly Travers has one goal – make the Vancouver Games, no matter what it takes. She has no time for distractions, even if they come in the handsome form of her Canadian best friend’s twin brother. This hockey player may say he’s not a player, but can she trust him?
Brent Karlsson has one goal – make his sister’s best friend realize he’s a changed man and she should give him a chance. When a set-up in Hawaii helps these two opposites realize they have more in common than they thought, what happens when he wants to turn their fake relationship into something real? And how can a relationship work when these two elite athletes never see each other and live on opposite sides of the world?

Before I forget, please check out my website at www.carolynmillerauthor.com (where you can also sign up for my newsletter) where I have a bunch of special bonuses, like sample chapters, travel pics and playlists connected to this series. I’m working on my fitness this year, and enjoying listening to Holly’s Workout playlist for inspiration!

Now let’s chat! Do you enjoy watching the Summer or Winter Olympics? If so, what’s your favorite sport? Do you or any of your family members / friends enjoy playing sports? Have you ever tried to live down a reputation or struggled to trust someone? Do you know someone who has married after being in a long distance relationship?