I’m happy to turn the blog over to my friend and fellow author Lucie Ulrich for this Christmas Eve-Eve post. I know you’ll enjoy getting to know Lucie and learning about her Christmas romance, The Starlight Inn.

No, not that Christmas. I’m talking about the first Christmas my family and I will be alone. In forty years of marriage, I can only think of a few times when one set of parents or the other wasn’t with us; or us with them. Hard as it was, I knew we’d see them again. This year is a different story. We lost my father, the final survivor, in June, ending a Christmas tradition.

Somehow, I managed to get through Thanksgiving without any emotional breakdowns. It helped that our neighbors of 25 years joined us for food, fun, and games. We toasted to Dad’s memory and enjoyed the day. Two days later, I pulled out the Christmas decorations and set about decking the halls.

All was well until the day my husband and I went tree-hunting. My heart wasn’t in it, which is completely out of character for me. We came home without a tree. Our second attempt happened on my husband’s birthday. I figured this was the day. We were the only people in the tent and the salesman was very helpful. I felt upbeat…and then I didn’t. I quickly agreed to the tree my husband chose, glad to be done. It wasn’t until I paid for our purchase that it hit me.   Dad wouldn’t see the decorated tree, wouldn’t struggle with what to buy the kids, and wouldn’t join us for our Christmas feast. Unexpected tears filled my eyes as reality settled in my heart. 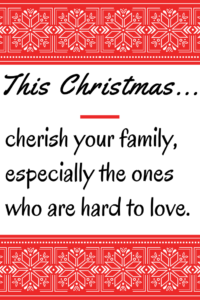 My father and I had a complicated relationship. We fought to find love, but we did find it. The man who often frustrated me was also the man who not only read my books, but prided himself on getting his neighbors to buy them. He was funny that way. With each new book I write, I’ll miss his commentary and questions, but mostly I’ll miss him.

Cherish your family—especially the ones who are hard to love. The struggle is real, but the rewards are endless.

And now…here’s an excerpt from Lucie’s newest release, The Starlight Inn. Enjoy!

Nick spotted Ella entering the room with a large tray of whatever Fran had cooked up for people to nibble on. She wore dark jeans and a white sweater with a large, loose collar that draped in front of her. A shiny red and green necklace with matching dangling earrings had her looking like the prettiest Christmas present he’d ever seen.

With a nod, Ella acknowledged him from across the room. She made small talk and interacted with each person she came into contact with. By the time she reached his side, her tray was empty. “I hope you’re not hungry.” 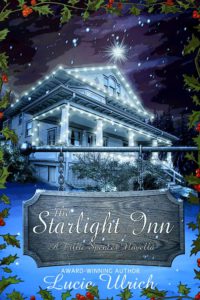 Her smile had his stomach doing funny things. How it was possible, having known her less than eight hours, he didn’t know. Nor did he care. “Thanks, Ella, but I can’t think about eating right now. There’s way too much to take care of.”

“In that case, I’d better get back to work.” She spun around to leave then turned back. “By the way, the two guys you have on staff are fantastic.”

“I’m not surprised. They’re temps I hired for the holidays, and the only two who showed up early knowing they might get stuck here.”

“That’s impressive. Maybe they should be more than temps.”

“I’d like nothing more, but they’re college kids, and only home during summer and breaks. They lost their dad about ten years ago. My father used to give them odd jobs when they were kids, and I give them as many hours as I can when they’re in town.”

“Wait. They’re home from college and will likely miss Christmas with their mother? That’s awful.”

He tucked a wayward strand of hair behind her ear. “You’re going to miss Christmas with your family, yet you’re here helping out. Brad and John are good people, just like you.”

Ella’s eyes misted, which only enhanced the sparkle in her eyes when she smiled. “It’s easy to be nice to nice people.” She cleared her throat. “I really need to get back to work and so do you.”

True, but Nick couldn’t find it in him to move until Ella had disappeared from sight.

“You look like a man in love.” Tillie appeared by his side, dressed in silver sparkles.

Hoping his nervous chuckle didn’t give him away, Nick quickly changed the subject. “Wow, Tillie. You look fabulous. That’s the best gown to date. Makes you look like a glittering angel.”

Laughter, like music, rang out. “Silly boy, if I were an angel, I’d have wings.” She took his arm and tugged him toward the tree. “I have something for you.” Tillie held out a small square giftwrapped box.

Nick waggled a finger. “It’s not Christmas yet, Tillie. You know the rules.” “That’s right, so I want you to be prepared.”

“Prepared?” Nick expelled a breath. This sounded like one of Tillie’s long-winded stories, and all he could think of was the need to mingle with his guests and make sure things were on track for dinner.

Tillie patted his arm. “Not to worry, dear boy. I know your time is spread thin, so I won’t keep you.” She placed the box in his hands. “It’s for Ella. I want her to have something to open tomorrow, and I want it to come from you.”

Nick chuckled. “If you give me a present for her, it’s not exactly coming from me, now is it?”

He could have argued, but that would have prolonged the conversation. Instead, Nick reached for his wallet and pulled out the bills in it. Sadly, they totaled a whopping twenty-seven dollars.

Tillie reached for the five-dollar bill and handed back the rest. “Perfect.”

The exchange was beyond crazy. Nick hadn’t considered a gift for Ella, but the thought of surprising her pleased him. Then again, he’d likely be just as surprised, having no idea what was in the box. Asking Tillie crossed his mind, but once again, time was an issue.

Reaching for the box, Tillie took it from him. “Go take care of business. I’ll hold on to this until tomorrow.” She rose on her toes and kissed his cheek. “Don’t let her get away, Nick.”

“I’ve only known her a few hours.” He might as well have been speaking to the wind. Tillie had already joined a family of five on the other side of the room.

You can find The Starlight Inn for 99cents wherever e-books are sold, including:

You can learn more about Lucie Ulrich and her other books by visiting her last guest post on Inspy Romance. You can also find her online at https://www.facebook.com/inspywriter, https://twitter.com/LucieUlrich, or http://lucieulrich.com/. 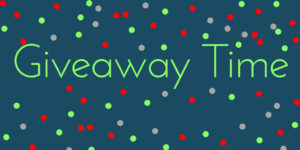 Two participants will be randomly selected to each receive one e-book copy of The Starlight Inn for Kindle or Nook (winner’s choice). The giveaway closes at midnight tonight (the 23rd). To enter, comment below with an answer to this question:

What is the most unexpected Christmas gift you’ve ever received?