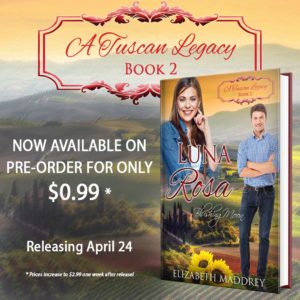 I’m super excited that my contribution to the Tuscan Legacy series, Luna Rosa, is set to release on Tuesday!

Book one in the series, That’s Amore by Marion Ueckermann released this week and I hope you’ve all been enjoying that delightful introduction to this multi-author undertaking! There will be 9 books in all, released one a week, for the next 9 weeks.

Best part? Right now they’re all just 99 cents. You can pre-order each of the books in the Tuscan Legacy series on our Amazon series page. (They are Amazon exclusive.)

Since we’re so close to the release date, and there’s a little sneak peek in the back of That’s Amore, I thought I’d go ahead and give you an excerpt to whet your appetite just a little more.

Nick closed the lid of the grand piano in the choir room of his church and moved around to the keyboard. Sunday afternoons were always hard. His brother Piero was off on another globe-trotting photo shoot, probably beating the women away with a stick. Or not beating them away, which was much more Piero’s style. A woman—or two—in every port, and never a backward glance when it was time to move on.

He sighed and let his fingers roam the keys. For being twins, he and Piero couldn’t be more different. His brother had gotten all the dark, Italian good looks. Nick looked as American as his father. Not that there was anything wrong with that, but all-American boy next door was never going to win against mysterious Italian. He didn’t even have a corner on the musical talent. Both his brothers played. Mom had insisted on it. Nick was the only one stupid enough to try and make a living from it.

That voice. Nick took his hands off the keys and turned, one eyebrow lifting. There she was. What was Louisiana Chalfant doing in his tiny church? “Am I in your seat again?”

Pink spread gracefully over her cheeks. “No. I—I’m supposed to meet Dr. Walters? The choir director? This is the choir room?”

Nick nodded. There was a hint of the south—the deep south—in her voice when she wasn’t angry. It wasn’t a Texas twang, it was round and brought to mind hot, swampy nights, in a bayou where frogs chirped and the air just settled in like it was there for a visit. He pulled his thoughts away from the image forming in his mind. She was here to meet Bob, which explained why he’d stopped Nick and begged for a quick tune in the choir room. “I’m sure he’ll be here before long. I’m Nick.”

She eyed his extended hand for a long moment before extending her own. “It’s a pleasure to meet you.”

Nick battled a smile, her smooth hand in his. “I missed your name.”

Irritation flashed in her eyes and she opened her mouth.

“Oh, good, Nick,” Bob Walters, the choir director for their small church strode into the room, his presence taking up more space than his physical body. “You’re still here. And I see you’ve met Ms. Chalfant?”

“We were just getting to that.” Nick let her tug her fingers once before letting them slip from his grasp.

“But surely you recognize her? The new pianist for the NSO? I’m sure the Kennedy Center has her information everywhere.”

Nick shrugged. “Not down in the lower levels of the theater where I work, no. I don’t spend a lot of time upstairs. Pleasure’s mine, Ms. Chalfant.”

“Oh. Well. Of course.” Bob frowned before waving it off. “I was hoping the two of you might do some duets. Obviously, Ms. Chalfant, any time you’d like to play, you need only let me know, but there are some lovely pieces for four hands and we’ve never had someone to equal Nick’s talent before.”

Nick fought off a laugh at Bob’s poor choice of wording. Would she ever give them her first name? Or were they really meant to call her Ms.?

Her mouth gaped. “Four hands? I don’t—you can’t be serious?”

Bob deflated. “Oh. Well. No, of course. I imagine you’re too busy to practice such a thing. And they do take some time. I’d just hoped…”

Nick cleared his throat and glared at the woman. Diva! “I imagine we can both sight read well enough to handle it, Bob, if you’d like us to try. I’m certainly willing.”

She stood even straighter, though Nick couldn’t quite figure out how that was possible. She already looked like she had a steel rod instead of a spine. “Perhaps you have some music we might try? Then we could see if there’s really any point in exploring the possibility further.”

She doubted his talent. Nick bristled and glanced at Bob. “How about the piece we discussed two weeks ago?”

“I know. But let’s give it a whirl.” His heart hammered in his chest. What was he doing? Even Bob was trying to stop him from making a colossal mistake. But this woman—she needed to see that there were people who could play the piano every bit as well as she could. Just because she chose to make a living in front of the keys instead of behind them didn’t mean he hadn’t had that same opportunity. Once. His gut twisted. Best not to go down that trail.

Nick took the sheet music from Bob, his gaze roving over the notes he’d written. It wasn’t an original composition, not really. It was more of an arrangement—a mixture of hymns and classical pieces that had seemed to flow from one into the other. Some of the bridges and segues were his own, but how much did that count, really? He sent Louisiana an arch look and gestured to the piano bench. “Primo or secondo?”

“As it’s usually the more difficult, I’ll take primo.” She slid onto the bench and positioned her hands over the upper keys.

Nick managed not to roll his eyes. Barely. Big surprise she’d want the showy part. Well, lucky for him, he’d arranged the piece and kept the parts fairly balanced. He’d wanted them both to be fun to play, not to leave the poor secondo bouncing along on the base notes like a glorified drummer. He set the music on the stand and glanced at her. “Whenever you’re ready.”

She lifted her chin, her gaze scanning the notes for a bare second before she nodded and counted off a swift measure.

It was better than he’d imagined in his head.

He’d played both parts before. He’d even recorded one and then played the second along with it to get the full effect, but that didn’t compare to the beauty of the experience when both parts were live.

For all Ms. Chalfant was a diva, she knew how to play. She seemed to lose herself in the music, the dynamics swelling and receding as if they were simply part of her, not something she had to remember to add. Soon—much too soon—they reached the end of the piece, breaking off at the same time as though they’d practiced together many times.

Louisiana turned to him, her gaze full of wonder. “Why do you tune pianos when you can play like that?”

“Because I like to eat.” Nick shrugged and started to stand, but her hand caught his arm.

“You have true talent. Why would you waste it?”

“I don’t consider what I do a waste.” Did she mean to be insulting, or was it just second nature to her? He tapped the top of the first page where his name sat under the title, declaring him the composer. “Besides, I mostly consider playing a way to listen to the music that’s in my head.”

Her hand dropped from his arm as her mouth opened.

“Just tell me when you want us to play, Bob, and I’ll be there. I’ve got to run.” Nick grabbed his bag and offered Diva-girl a nod. Nothing he’d said was a lie, but it wasn’t the complete truth, either. He’d had a shot at a performance career, and he’d flubbed it so badly the people who’d been there were probably still laughing about it eight years later.

I hope you’ll all join us in Tuscany during April, May, and June!