Most of the time I try to write these posts well in advance and get them scheduled so I don’t accidentally miss getting them up OR the day doesn’t sneak up on me so I have to write them right quick before the post is supposed to be up.  This one hasn’t worked out like that, and I was kind of getting antsy with myself about it.  I was thinking along the lines of what books I have coming up that I could write about or post about. I was thinking about what book or books I wanted to put in front of you as “my readers” or thinking maybe I should post about the New Year or something inspirational to tie-in to a book that is set around the New Year. (See, you all think these posts just “happen,” but we on the other side of the keyboard do often put a lot of thought into just what we’re going to post.)

Suddenly this evening multiple pieces of disparate information started coming together, and I finally knew exactly what I wanted to say with this post.  This is important so pay attention.

The first piece happened before the second (haha, that’s funny! Of COURSE it did!), but I didn’t put the two together until the first piece showed back up in my Facebook newsfeed again later as two posts that got me thinking along this line.

That first piece is the sad one.  Carrie Fisher died today.

Now I know, you may not be a Star Wars fan. I get it.  But MY experience with Star Wars is this:  I was 7 years old when my uncle took me to see the very first Star Wars… in the theater!  Of course, now that’s not really a big deal, but back then, for a girl from a tiny little town who had probably seen a total of five movies in a theater in her life to that point, it was a BIG DEAL.

Also, (of course), Princess Leia was my hero!  Grab those blasters!  Shoot your way out!  Don’t let the guys push you around!  Be sassy and strong!  Take charge of your own story!  Be beautiful and brave! Stand up to evil even if you don’t know how this will ever work out!

In short, she was the definition of COOL to a 7-year-old girl.

Added to that, I went to see Star Wars as a 7-year-old with a brother I adored. He was 13 at the time, and Star Wars became a touchstone of our growing up together. We went to see The Empire Strikes Back and later Return of the Jedi when I was a senior in high school… back when there were no DVD’s to “watch it again.”  You watched it ONCE, and burned it as much as you could into the fabric of your soul during your viewing. We would get out of the movie and talk and talk and talk about it.

My brother also is no longer here with us, so there’s that.

Shortly after finding out about Ms. Fisher’s death, I happened to see this video someone posted on Facebook (https://www.facebook.com/deltaprotective/videos/10157890106040640/ ). Now honestly I’ve never heard of this guy, Simon Sinek, but I see exactly what he’s talking about with many of my daughter’s friends. Millennials who grew up being helicopter-parented and who are now in college or just out—facing a life they do not feel prepared to deal with.

One of the points Mr. Sinek makes is that Millennials say they want to have an “impact” on the world when they go to work. Then they get jobs that are not inspiring and do not appear to have any impact. Thus, they become bored and uninspired, just going through the motions because they do not see how what they do is even worthwhile much less having an impact.

Now I’m going to add one more piece to this puzzle (and it’s about writing Christian Romance!). I’ve recently added a new series, The Grace Series, to my growing library of books written by me. In writing this series, I’ve ditched some of the conventional wisdom of writing Christian romance. Things like “only two points of view allowed”—the first book has three points of view, and the reader doesn’t even know who the actual heroine will be until about Chapter 3.  And other things like the length of a long novel is roughly 100,000 words.  The first book in the series, Mirror Mirror, clocked in at 240,000+ words!

None of this was really MY idea or plan. I simply wrote the story God was giving me, as unconventional as it ended up being.

So far I have gotten some very nice comments on the series such as: 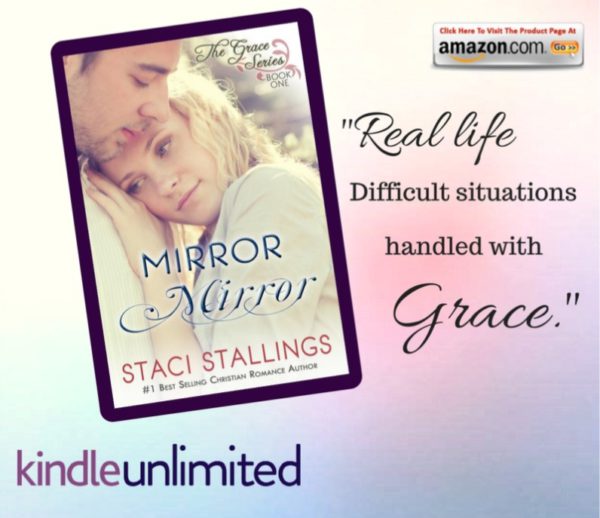 “When Stallings writes, she writes to where it is no longer fiction but to where the people in her novel are real. When one reads this novel it brings to light that there are actual situations and people in the world who hurt this way, feel this way, and live this way and who really needs God’s authentic non-condemning love.

“Yes, the story is revolved around Sage and Luke, but once you continued to read you are longer just concerned about those two characters but about all that surround them. Your heart is drawn to reasons why certain characters act the way they act, and you long to see them helped.

“The way Stallings invites God into her writing gives the reader a chance to see the author. What she believes and what she has learned from God in the process of writing this novel. There’s a line in the novel that says, “We give from the overflow of what God’s doing in our lives.” I truly believe that is what Stallings does when she writes her books and novels, and I am grateful for her pouring out what God is pouring into her. We are filled only to be emptied.”

To put it simply, readers write reviews saying that my books have had an “impact” on their lives.

I will not presume to speak for Ms. Fisher, but I know for me early on in my career, I did not start out with the idea that one day I would have this kind of impact.  In fact, even when I started writing this particular story (Mirror, Mirror), I did not realize the impact it might have.  I just knew it was a story I was being called to write, and I wrote it the way God showed me to. Basically, I wrote as authentically real to the characters I was given as I could.

So to you out there (Millennials or not) who want to make an impact on the world, start with being authentically YOU.  Do what you love to do. Just like that little 7-year-old that Ms. Fisher never met nor even knew existed, impacts are often made not when you set out to make them but when you throw your heart over the bar and expect the rest of you to follow. That’s how you go about making an impact, but it starts by being willing to put forth the time and effort on the front end, going into projects not really knowing, doing your best, following what God shows you and asks you to do, and putting the results in His hands.

The more I do that, with the books and with life, the more impact my life has on those around me.

To all of you, may 2017 be the year God either uses your life to impact and inspire others or gets you ready to do so!  God bless you all on this amazing journey we call “life.”