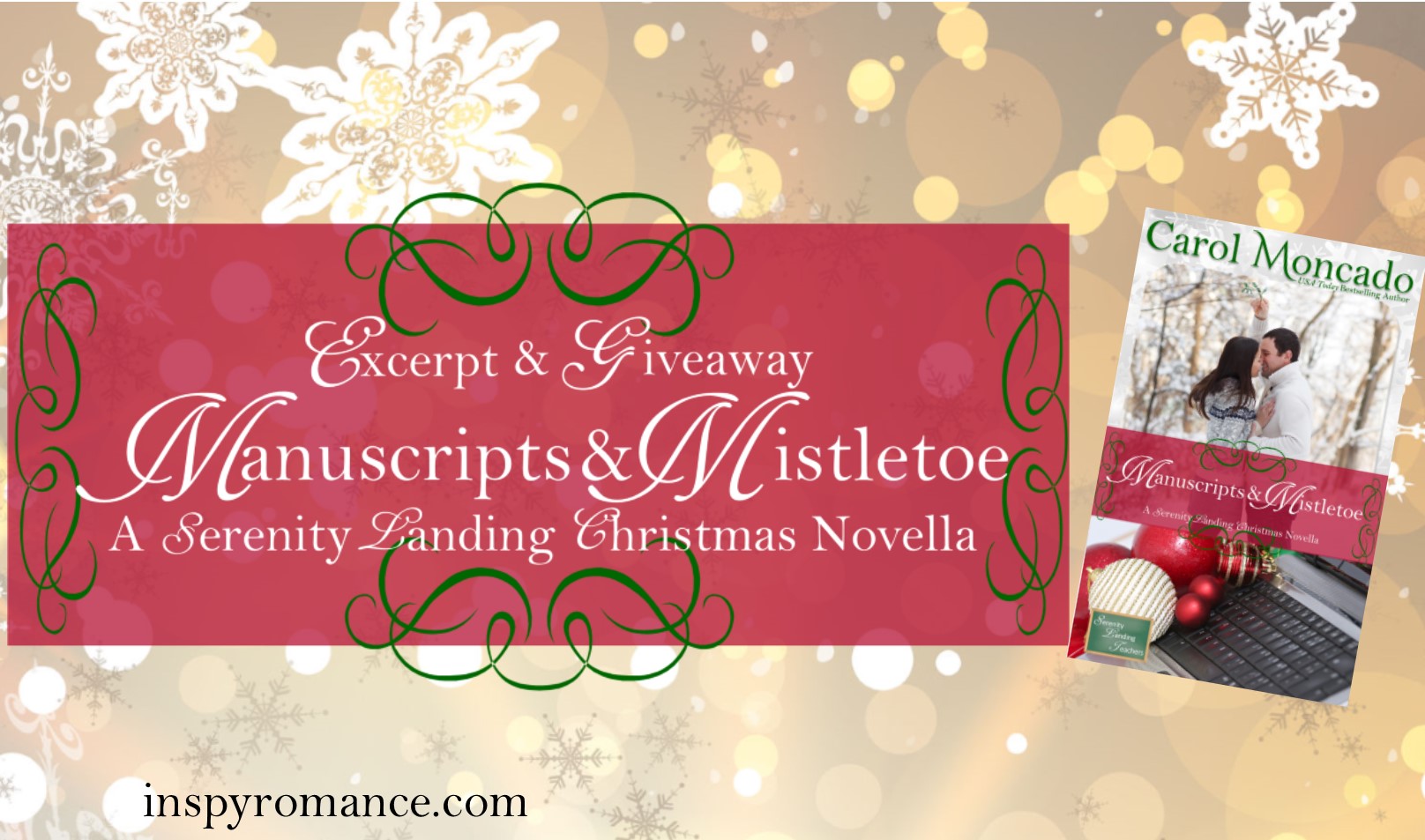 Hey, InspyRomance Friends! Isn’t December grand?! Of course, it’s currently the 3rd as I’m posting this, and I’m spending the first four days of the month with Ginger Solomon at a writing retreat – where we’re doing more retreating than writing it seems – at least the first day and a half at least. Both of us had crazy, crazy Novembers, and we needed the down time! One thing I did manage to do is get Manuscripts & Mistletoe to her so she could proofread it so I could get it posted! YAY! It released December 1! I do love this story and hope y’all do, too! Here’s the first little bit!

Missy Solomon tapped her finger on the table. Her idea of “on time” was ten minutes early, but this was getting ridiculous. The Christmas party committee meeting should have started eight minutes earlier, but no one else had arrived.

Suddenly uneasy, she pulled her phone out of her pocket and checked the email forwarded to her by Mrs. Diablo.

After deliberating a few more seconds, she went back to the classroom to find Mrs. Diablo packing her things for the long weekend. She’d be out the door as soon as three o’clock hit. Apparently, the admins were hawks about who left early on a holiday weekend.

“Is the meeting over already?”

For all her supposed academic prowess, the not-quite-elderly teacher was grumpy enough for the whole building.

“There’s no one else there. I wondered if it got moved or something.”

“I forwarded the email an hour ago. It’s not my fault if it didn’t show up on your contraption.”

Missy pressed her lips together to hold back the retort she longed to give. Cell and data reception in the building was terrible, and Mrs. Diablo told her she wasn’t allowed on the faculty Wi-Fi – or to use the computer.

“The meeting was moved to Mr. Smithton’s room.” Mrs. Diablo glanced at the clock. “You better take your things with you. The door will be locked when you get back.”

Missy grabbed her already-packed bag and headed for the stairwell on the other end of the building. Despite her recent workouts, she was out of breath by the time she reached the second floor. Three teachers walked out of the classroom, all going the other way and didn’t see her.

The door was propped open, so she walked in. Mr. Smithton looked up from putting a folder in a bag.

Missy shifted the strap higher on her shoulder. “I’m Mrs. Diablo’s student teacher. She assigned me to take her spot on the committee.”

“You missed the meeting.”

“I know.” Missy held up her phone. “Reception is terrible, and I didn’t get the email update yet. I was in the workroom.”

If possible, the frown on Mr. Smithton’s face deepened. “You’ve been assigned to the food and decoration committees. You’ll need to see Mr. Wyatt.”

Mr. Wyatt? Missy didn’t think she knew him. “Which room is his?”

Right. Directly beneath Mrs. Diablo’s room and on the other side of the school. “Thank you.” She turned and walked out before hurrying down the hallway and around the corner where she wanted to groan at how much further she had to go.

As she passed room 208, a young man, about her age, walked out of the next room, bag slung over his shoulder.

He looked up from locking his door. “Can I help you?”

Missy tried not to suck in a breath. How had she not met him before? “I’m Mrs. Diablo’s student teacher, Missy.” She held out her hand, but he held up both of his full hands. “I’m apparently on committees with you for the Christmas party.”

“You missed the meeting.” He shrugged. “And I’m the newbie on the committee, so we got stuck with food and decorations.” He pushed his glasses further up his nose with the back of his wrist. “Meet me here after school tomorrow, and we can go over it then?”

He glanced up from where he was putting his keys in his bag. “Right. But it needs to be done ASAP. We only have about three weeks before the party.”

Mr. Wyatt sighed. “Do you have plans tonight? We can go over the notes Mr. Smithton gave me?” He tipped his arm to look at his watch, nearly dumping the water out of his cup as he did. “I have a couple errands to run. Meet me at Cee’s Bakery at 5:30?”

Missy blinked. “Sure.” She didn’t have plans, but she wasn’t sure she wanted to spend the first evening of a long weekend planning a Christmas party either.

At least he was cute, and she’d heard the kids liked him.

He turned and walked off, waving the hand with the cup in the air. “See you then.”

All righty. This could be an interesting night. Or it could be the most awkward hour of her life.

He was cute, but this could turn out to be a nightmare. 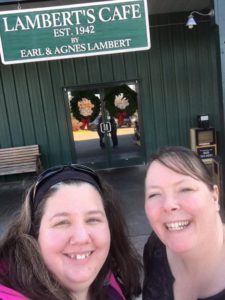 Here’s me and Ginger at Lambert’s Cafe in Sikeston, MO. Sikeston’s not really a tourist town or anything but it’s about halfway between for both of us, so it works! My second cousin and I also plan to meet up here for a girls’ weekend next year, but we met doing family research and some of our family tree is from this neck of the woods so…

Let me know your favorite part of Christmas in the comments and one lucky commenter will get a Kindle copy of Manuscripts & Mistletoe!

So what’s Manuscripts & Mistletoe about?

Missy Solomon just needs to get through the next few weeks of student teaching. Then she’ll graduate and, hopefully, land a job at Serenity Landing High School. Maybe, somewhere in there, she could even find time to work on her Great American Novel – or at least her attempt to write one.

Shane Wyatt noticed the student teacher, but hadn’t talked to her. Ever. Not even when they went to school together. But now they’re on the Christmas party committee together, and somehow, he’s invited her to spend Thanksgiving with his family.

Christmas committees. Thanksgiving. Ex-boyfriends. A secret they’re both keeping. All of these get their first few days of friendship off to an interesting start. Toss in some mistletoe and there’s a Christmas story with an ending that would make the Happily Ever After Television Network proud.