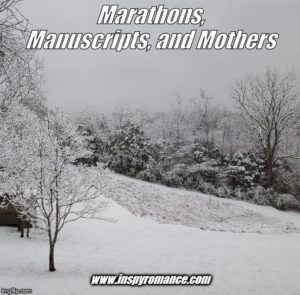 What do the three M’s…Marathons, Manuscripts and Motherhood have in common? Well, as a former marathon runner, I’m convinced beyond a shadow of a doubt that the countless hours of running and training during my marathon days prepared me for the other two.

Marathon running is an endeavor that requires dedication, commitment, follow-through and sacrifice. Runners have to train when they don’t feel like it…when their legs ache and they haven’t slept well. When the weather is hot, humid, cold, rainy, or the ground is blanketed in snow. Runners train before the sun rises, after dark, and as a strong north wind tries to blow them right off the path. Distance runners maintain focus and stay true to the goal. There’s no turning back, only looking forward and always striving for the next great challenge.

The same can be said of writing. It’s a path that requires dedication, commitment, follow-through and sacrifice. Writers plot even when they don’t feel like it…when their friends are going to the movies or out to dinner, when they’d rather read than revise, when warm rays of sunshine beckon from an office window and their heart longs to run and play. Writers pound the keyboard early in the morning when the rest of the world has yet to rise and late at night when the rest of the world has gone to bed. They write when the refrigerator lures with just one more soda or a piece of chocolate pie. When writer’s block strikes they take a sledgehammer to it instead of pushing away from the desk, no matter how painful the sacrifice.

Being a mother is an endeavor that requires dedication, commitment, follow-through and sacrifice. Saying no to a child has never made any mother popular. Moms overlook their own needs to care for a child. They mother early in the morning, late at night, and every moment in between. They remain strong as a century-old oak when the storms of terrible two’s and the teenage years rage, while teaching their teen to drive or when their toddler throws a tantrum in the grocery store check-out line.

My life’s journey has been a blend of the three M’s. My daughter recently embarked on a career as a middle school science teacher, carrying the torch that I once held. The child I once shuttled to basketball practice and choir rehearsal now chauffeurs me. I have learned, depending on the day (sometimes even the hour), that I know nothing…and everything. Recently, a college friend of mine sent a photo that was snapped our sophomore year (more than a few decades ago). Looking at the photo, I thought I saw my daughter staring back at me. Was I ever that young and…unwrinkled? My daughter took one glance at the picture and gasped, “Mama, is that really you?” as if I could have never—possibly—been that vivacious young woman in the snapshot. After a good laugh, I thought about the fleeting passage of time and how happy and truly blessed I am to have experienced the three M’s…Marathons, Manuscripts and, most especially, Motherhood. 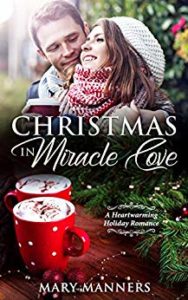 Down on her luck after budget cuts claim her job, art teacher Hope Casey returns to Miracle Cove to raise her five-year-old daughter, Sydney. While working at the local diner, Hope is befriended by Noah Armstrong, the youth director at Miracle Cove’s Community Church.

Noah is dealing with issues of his own—a painful divorce following confirmation that he’ll never be able to father a child. Noah longs for a family of his own, but fears it may never come to pass.

When Noah and Hope team up to direct Miracle Cove’s Christmas Pageant, they are both searching for a little holiday cheer. What they discover is truly a Christmas miracle.