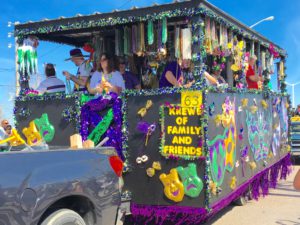 We just went down to Pass Christian, MS for a week, to help our daughter and son-in-law paint and landscape their home.  These were all projects that wouldn’t be much fun alone, but with four sets of hands, it’s always more enjoyable, and seeing faster progress makes it even better.

It wasn’t just work, though…we love the restaurants in this area, the balmy breezes coming off the endless white sand beaches and smooth waters of the Gulf, and the culture, which is so different from the Upper Midwest.  And on this trip, some of my preconceptions were corrected about the biggest celebration down there–Mardi Gras! 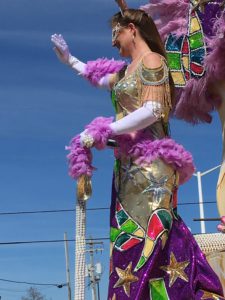 From only seeing news clips on the television, scenes in movies and  photos in other media, I’d thought that all of Mardi Gras was wild–massive crowds filling the streets of New Orleans late into the night, drinking, bawdy behavior, and even danger. I had no idea about the wider scope of this annual celebration–or that much of it is actually family friendly.  In fact, the timing is related to the church calendar, beginning  after the Epiphany (Three Kings Day) and ending the day before Ash Wednesday, which then ushers in the Lenten season.  Some of the parades are sponsored by local churches–such as the Catholic church in Pass Christian.  These parades that can last up to three hours!

There are  some festivities that are adult-themed, certainly, but many of the Mardi Gras parades in small towns along the Gulf Coast are meant for families, and there is even one with a pet parade.

The photos here include several of the Waveland parade queen’s Maids–who were covered head to toe in  gorgeous, shimmery, sequin covered dresses. My iPhone photos didn’t do them justice, and I missed getting a photo of the Queen–also an older lady who was  beautifully gowned. Our daughter tells me that the Queen and her Maids are chosen from women who work hard to help make these events happen.

A couple years ago, Emily brought a big bag of throw beads north, and are they ever popular with the grandkids–who play with these gleaming, glittering, colorful bead 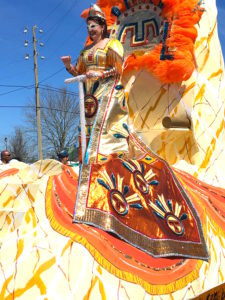 necklaces on the living room floor like they are a mountain of precious jewels.

We attended the Waveland parade during our visit. Thousands of  adults and children of all ages  lined the parade route, waving their arms to attract the attention of the people on the floats going by–who then threw  bead necklaces  into the crowd. Each float is sponsored by a “krewe”–or group of people who work on this event through the year. The beads and other throws make these parades a truly interactive experience.

Many of the krewes  also tossed plastic drinking cups, candy, and trinkets into the eager hands of the spectators–and various toys and stuffed animals to the children.  Between the four of us, we ended up with well over twenty pounds of beads to bring home.

I have always wanted to write a book set in New Orleans, or in the bayou country nearby. And now, I will know that  scenes involving  Mardi Gras can  be suitable for a sweet romance…and they don’t need to be set only in New Orleans and the Gulf Coast. In fact, I  was surprised to learn that big  Mardi Gras celebrations  take place all 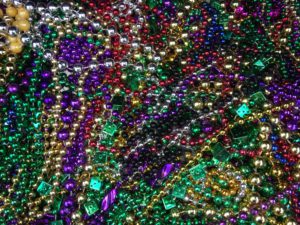 over–including  California, Texas, Brazil and Australia.  The second largest in this country is in St. Louis!

So…what special festivities do you have in your part of the country? It would be fun to hear about them!

Best wishes to everyone as springtime approaches!