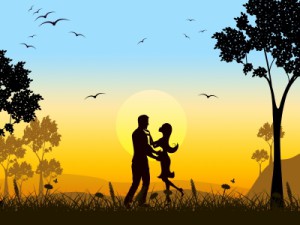 Photo by photostock taken from freedigitalphotos.net

Sometimes it’s love at first sight, other times it grows more slowly, from an acquaintances to friends to… Well, I’ll let Marji Lane Clubine tell you the rest.

Sweet hubby and I celebrated 28 years a couple of months ago. He is my real-life hero, rescuing me from overheating cars, broken fences, and cockroaches. And that was just last weekend.

But he didn’t start out as my hero. In fact, looking back to my college years when long-haired musicians caught my attention (especially if the hair was dark and the eyes were blue – Swoon!) my sweet hubby had not any of the qualities that I wanted.

He was an accountant major, for pity’s sake. Wore western cut plaid shirts and had short blond hair with green eyes.

But then, he didn’t get my attention in the first place with his looks. He and his best friend made a point to be in my path almost daily. We’d all first met at the Baptist Student Center and engaged in some conversations about our faith. I guess that was the real draw to this guy.

I didn’t know it at the time, though.

The three of us became friends. Hubby and buddy worked out while I was in my last morning class. They made a point of knocking on the window of the workout room as I passed by. At first, I’d just wave, but since my apartment was virtually on campus, I started making lunches for them. Sometimes, we’d even spend the afternoon together fishing.

Yes, you read that right.

This lasted throughout the spring semester. For the summer, I was running the craft room at an East Texas children’s camp. Beautiful place. Hubby wrote several times. I stopped by his parents’ home on my trips to town. He even came and visited me one Saturday.

I decided I’d give him a thrill and go out with him once or twice when I got back into town. (Conceited little thing, wasn’t I?)

Towards the end of the summer, I took a week off of the camp to go to a student week at a conference center in Glorieta, New Mexico. Beautiful place! I was excited because hubby was going, too. And he was driving the truck that belonged to one of our leaders, dragging our luggage trailer behind. I looked forward to riding with him and getting to talk together. 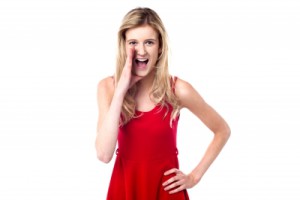 Only another girl was riding with him. What? He was my friend. My best friend. And how was it that I didn’t even know about this girl? I soon got an earful about it, however. Heard about their regular dating all summer long from the girl’s best pal.

So as soon as we stopped for a break, I sat on the edge of the truck while he pumped the gas and asked him about it. The dating, the girl, why he hadn’t said anything, all of it. Seems she was a lot more serious than he was. He was bored—she was there. And when she stuck her things in the passenger seat of the truck, he didn’t know how to shove her out.

It’s funny how the Lord opens eyes. I’d never really considered him date material. Until someone else considered him in that way. The rest of the trip to Glorieta provided me with plenty of reflection time. Lots of regret and embarrassment, and a determination to value my relationships better.

I didn’t expect to steal away the guy. Didn’t think of trying. And we were still best friends. He spent every stop talking to me, sat with me at dinner, and talked long into the night with me when we finally arrived at the camp.

The girl he’d been seeing was waiting up for my return that night. She explained that she’d been dating him for some time and valued my opinion as to whether she should continue to pursue him or drop him.

Really? She was asking green-eyed me?

I honestly told her that she should not ask my opinion. That I was the last person she should speak to about this. Still, she pressed. “I trust your judgment.”

I don’t know if my judgment answered her, but having warned her not to ask me, I had no compunction in telling her to drop the guy. Which she did. Next day, hubby and I were hand-in-hand exploring the streets of Santa Fe.

He wasn’t my type. Not a musician. Didn’t have long hair or even blue eyes. But for the first time in my life, I had forever thoughts about a man. By our third date, we were speaking of families and futures. It’s a good thing the Lord looks past what I want and gives me what I need instead, because sweet hubby became both in quick time. 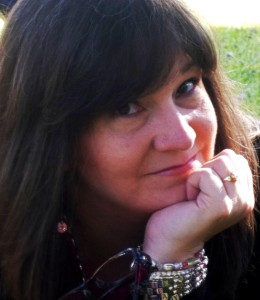 Marji Laine, a homeschooling mom, lives with her husband, their four grown and almost-grown kids, and a spoiled black Lab in the Dallas area. When she’s not fighting for quiet time and a space of her own to visit with her characters, she’s indulging in photography, watching NASCAR, and lately helping her oldest with wedding plans.

She works part time as the children’s music director at her church, leads a college-aged Bible Study, and teaches high school writing. She loves acting in stage plays, sings in small groups and a large choir, and has a passion for sharing about the relationship that the Lord wants to have with His children.

She has so loved being involved with Write Integrity Press and their last four collaborative novellas. “What an amazing group of creative and talented people!:” Contact her at MarjiLaine.com or find her on Suspense Sisters Reviews, Facebook, Twiiter,Goodreads, Pinterest, and Google+. 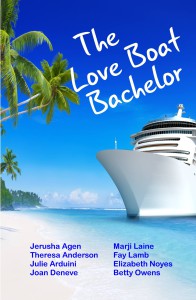 Romance is a joke.

After the love of Brent Teague’s life came back into his world only to marry someone else, Brent is through with women. He might be through with being a pastor, too.

Brent was so sure that God brought Mara Adkins home to him so they could marry and live happily ever after. Six months after her wedding to another man, that theory is obviously a dud. If Brent could be so wrong about that, who’s to say he’s not mistaken about God calling him to pastoral ministry?

Tired of watching Brent flounder for direction, Brent’s feisty older sister boots him out of Spartanburg and onto a cruise ship. Brent’s old college buddy manages the ship’s staff, and he’s thrilled to finagle Brent into the role of chaplain for the two-week cruise.

As the ship sets sail, Brent starts to relax. Maybe a cruise wasn’t such a bad idea after all. But there’s just one little thing no one told him. He’s not on any ordinary cruise. He’s on The Love Boat.

What’s a sworn bachelor to do on a Caribbean cruise full of romance and love? He’ll either have to jump ship or embrace the unforgettable romantic comedy headed his way.