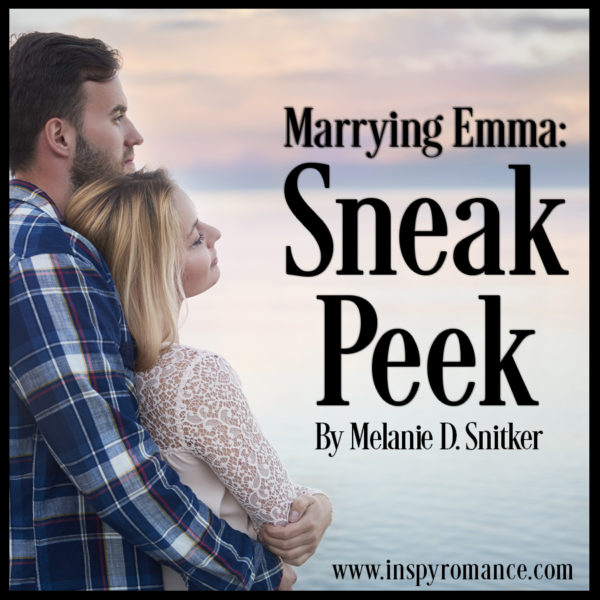 I’m so excited to have finished Marrying Emma, the fifth book in my Brides of Clearwater series. Penning the last 15,000 words was a bit of an adventure, though, as I wrote between rolling blackouts during the crazy winter storm last week. Our area of Texas sees a dusting of snow maybe once or twice every seven years. We got snow twice in one week for a total of nine inches. It was unheard of! While our daughter enjoyed the snow, and we had fun making snowmen and eating snow ice cream, we’re all happy that our sunshine is back and the snow has since melted.

Marrying Emma is set to release in less than a month. I can’t wait for you all to read it! I thought I’d share an excerpt:

Emma witnessed the entire exchange, and it was all she could do to not groan or smack Marty in the back of his head. Seriously, did the guy have to flirt with everyone? She grabbed her backpack, lunch, and headed for the door.

She’d just made it to her car when the younger woman left the gym with a wave over her shoulder. Marty jogged out behind her, spotted Emma, and turned her direction.

Pretending she hadn’t noticed him, Emma tossed her things into the passenger seat and slid behind the wheel. She almost got the door closed before Marty caught it. “You in a hurry? I thought maybe we could get some lunch.”

Emma motioned toward the sports car pulling out of the parking lot. “Why didn’t you ask her to eat lunch with you? Seems like the next logical step after all of that flirting. You guys obviously have a connection.”

Marty rolled his eyes. “I was talking to a potential customer and encouraging her to try a class.”

He put one hand on her door and the other rested on the car on the other side. He crouched down until he was face-to-face with Emma. “Maybe you should ask yourself why my flirting with other women bothers you so much.”

Marty should have let her one-word comment go and walked away before either of them said something they didn’t mean. Except he didn’t. Couldn’t. And now he was crouched down next to her car, watching her cheeks turn a pretty shade of pink, and admiring the fact that she hadn’t flinched at his question. She was staring him down—giving as good as she got—and all Marty could think about was leaning in and kissing her. A move, he was quite sure, would not be welcome.

Even with her lips pursed together in irritation, they were pink, full, and begging for attention. He shifted his gaze back to her eyes before she deduced his line of thinking.

Those lips finally parted as Emma responded with clipped words. “Maybe not everyone who comes into the gym wants to be flirted with.”

If only she knew how hard it had been to flirt with a woman for the first time after his motorcycle accident. It’d taken everything in him just to prove he wasn’t going to let the loss of his leg hold him back. It’d become a coping mechanism, a way to prove to himself he was still normal. Still the same man he’d been before. It’d become a routine way of interacting with the women around him.

Maybe Emma was right, and maybe he should change the way he approached members of the farer sex.  But he wasn’t going to admit that, not now anyway.

His eyebrows rose as he thought about her comment. “No doubt you’re right. What about you?”

“What do you mean?” She crossed her arms in front of her as though offended.

Marty had no doubt she knew exactly what he meant. “Are you one of those women who doesn’t want to be flirted with?” When she didn’t respond immediately, he reached over with one hand and gently fingered a blonde curl. It felt like silk against his roughened skin. “There’s one thing you should know.”

“Oh? Please, do share.” Her arms were still folded, her green eyes sparking, but her voice sounded breathless.

Did he dare hope he had even a fraction of the effect on her that she had on him? “Of all the girls I’ve flirted with over the last two years, you’re the only one I’ve ever asked out.”

With that, he stood and strode to his Harley. The scent of vanilla and orange lingered, reminiscent of when he’d comforted her earlier. She’d fit in his arms perfectly. Why couldn’t she fit into his life so easily? 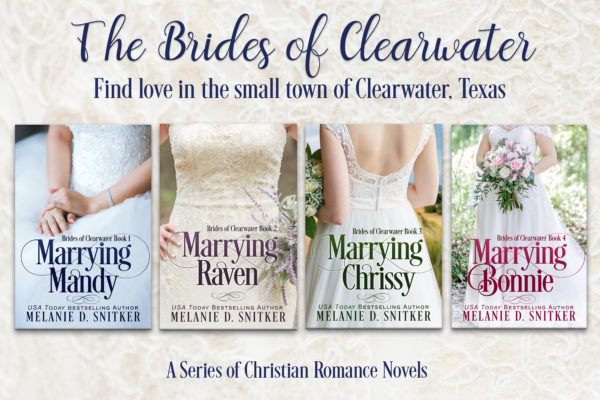 The Brides of Clearwater series takes place in the fictional small town of Clearwater, Texas. I personally enjoy reading a good inspirational romance written in any setting, but I’m especially fond of small towns.

What about you? Is there a particular setting you prefer?

Comment below, and you’ll be entered for a chance to win a digital copy of one of my Brides of Clearwater books (your choice). A random commenter will be chosen on March 3rd and contacted by e-mail. I look forward to reading your responses!