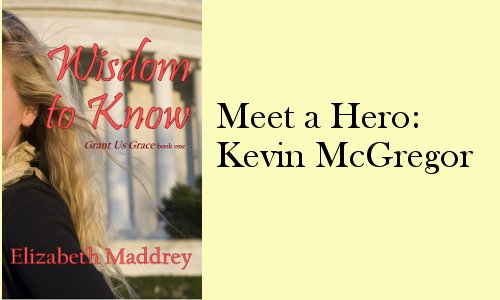 The other day, I asked what folks would like to see around here and while we didn’t get a huge deluge of answers, one thing mentioned was more character interviews. This worked out nicely for me because I love interviewing my characters and I needed something to post! (So hey, thanks for the idea!)

I am reaching into the wayback machine briefly here, but I figure it’s always better to start at the beginning, right? And so we’re scooting back to my debut novel, Wisdom to Know, and meeting the hero: Kevin McGregor.

Kevin: Thanks for having me.

Me: Since you’re here on a romance blog, let’s start out by having you tell us a little about your love life.

Kevin: Um. That’s not going to take very long. See, there’s this girl–well, woman–I’ve been in love with her since high school.

Kevin: Oh no. No, no, no. We’re not sweethearts. I mean, I’d like us to be. But she’s got me pretty firmly located in the dreaded “friend zone.”

Kevin: Tell me about it. I spend entirely too much time hearing about her dates with Brad. It’s always Brad this and Brad that. And she doesn’t get that Brad is not only a loser, but he’s cheating on her. Again. I don’t know what she sees in him.

Me: Hmmm. Have you asked?

Kevin: Ha. ‘Cause that’d go over so well. Though…I can probably guess. First off, he’s into politics, so she sees the potential for a high-profile life down the line. And money.

Kevin: That’s the thing though, Lydia’s not really like that, not at her heart. She puts on a front–she’s definitely got some issues about how people perceive her–but under that she’s great. She has the most incredibly caring heart. I just wish she’d let herself remember that.

Me: So nothing in the works to win her over?

Kevin: Oh, I’ve got irons in the fire. I’m just trying a subtle approach. I keep hoping that if we hang out as friends enough that maybe she’ll start to see me as more than that. I have it on good authority that she’s the one for me.

Me: Oh? Whose authority?

Kevin: You’ll probably think I’m nuts, but God made it pretty clear back in high school. I’ve been holding on to that ever since.

Me: You don’t think maybe you were wrong?

Kevin: Nope. I just think I need to wait – after all, Abraham had to wait quite a while before Isaac was born.

Kevin: Thanks. Hey – I’ve gotta run, I was going to swing by Lydia’s and see if she wanted to grab a bite. All part of my plan, you know?

Me: Sure, sure. Thanks for stopping by!

You can read the first chapter of Wisdom to Know here.

If you’d like to win a copy, leave a comment telling me when you first thought you’d found “the one” and whether or not you were right. I’ll pick a winner or two on Saturday (the 19th) – mention whether you want ebook or paperback.