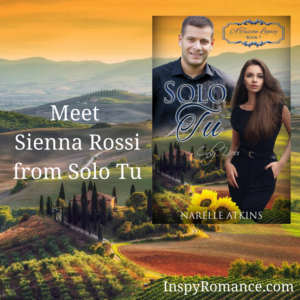 Ciao! I’m Sienna Rossi and I’m excited to visit with you today to talk about my story. Solo Tu releases on May 29 and is Book 7 in ‘A Tuscan Legacy’ series. I’m the second-to-last Rossi grandchild (and sometimes I feel like the forgotten grandchild) to have their romance story shared in the series.

When I finished my schooling in Tuscany, I pursued my dream of studying at an Australian university. I speak four languages (Italian, English, French and Spanish) and I’m now qualified to teach languages at high schools in Australia.

I’ve lived in Sydney, Australia for more than four years and I love Australia! Mammà has two aunt’s (Nonna Crisanti’s younger sisters) who married and moved to Australia many years ago, before I was born. I have three Aussie cousins who are like my big sisters, although they can’t replace my sorellina (Alessa) who lives too far away from me in Roma.

Jodie and Karen are sisters. I’m about to move into the spare bedroom in their brand new luxurious high rise apartment in the beachside suburb of Manly.

Check out the Inspy Romance blog post that gives you an insight into my world in Solo Tu – A Tuscan Legacy in Australia. The photo below of Manly Beach was taken at Fairy Bower – only a short walk from the apartment where I’ll be living with Jodie and Karen. 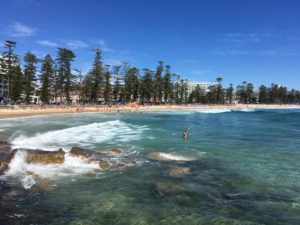 Billie is my confidante and mentor, as well as my cousin. She’s married to Zach, who is like my big brother (but he’s not as bossy as Rafaele). Billie has talked me into moving churches and I’m about to start attending her church – Beachside Community Church in Manly.

One advantage is the church will be in walking distance from home. I occasionally borrow cars from my Aussie family, but I don’t like driving in the city on the wrong side of the road! I grew up driving machinery on Nonna’s Tuscan estate, and I learned to drive in Tuscany before I moved to Australia.

Billie’s mother, and Jodie and Karen’s mother, are first cousins. Yes, my big Aussie-Italian family is complicated! And Papà’s family is even more complicated! We didn’t know we had another cousin, Rachel, until we met her at Nonna’s 80th Birthday Party! (Read about all the excitement and drama at Nonna’s birthday party in That’s Amore – Book 1).

My favorite Aussie sport is cricket. My cousin, Karen, played state level cricket during high school and she’s taught me a few things. I also played indoor cricket when I was at uni (the Aussie slang word for university). If you don’t know anything about cricket, you’ll learn a little bit about beach cricket at the start of Solo Tu.

Stop by ‘A Tuscan Legacy’ Facebook Group for the Solo Tu Release Day Party on May 29 to pick up a few cricket tips. If you’re into sports, you’ll love reading about me playing beach cricket!

Now, I know what you’re thinking… You’re romance readers, and you’re wondering what Dave’s like. He’s a great guy, and you’ll have to wait a bit longer to meet him. I’m sharing the opening paragraphs of Solo Tu below to give you an insight into my world (yes, my head can be a scary place to visit!). A longer excerpt is available at A Tuscan Legacy website.

Until we meet again, Ciao!

Sienna Rossi jumped to the left, almost tumbling onto the soft Clontarf Beach sand. A soccer ball flew past and landed in the shallow water. A young family of five played ball together and a little girl giggled, clinging to her father’s shoulders.

Sienna regained her balance, a familiar yearning infusing her heart. She longed to be that little girl, delighting in her father’s attention. She longed to wind back the years and spend more time with her father and siblings. And she longed for a few more days, or even a few moments, with her Papà. But he was gone. 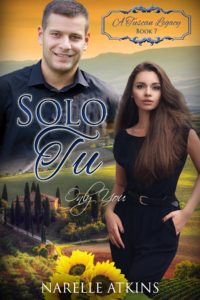 Home means everything to Sienna Rossi.

Four years ago, Sienna defied her father by moving to Australia to obtain her teaching qualifications. Her grand plan is shaken by her father’s unexpected death and a trip back to Tuscany for her grandmother’s eightieth birthday where she renews her close bond with her sister, Alessa.

Teacher Dave Maxwell likes the freedom of his nomadic lifestyle. He works contract-to-contract, moving to different high schools around Australia. He’s in Sydney for a season, caring for his grandma while his aunt is on an extended overseas vacation.

Back in Sydney, Sienna moves in with her Aussie cousins and starts her first teaching job, torn between her dream for a future in Australia and her longing for home. Sienna and Dave work at the same school, attend the same church, and quickly become friends. They are drawn together by circumstances and an undeniable attraction.

But their idyllic time together is temporary. Can the girl from Tuscany and the boy from Australia risk everything for love?

This nine-book Christian romance series from seven of your favorite authors releases weekly from April 2018. Look out for Book 8 in the series, Dolce Vita! 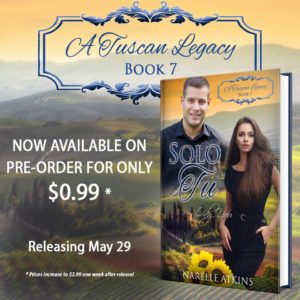