This past weekend, I got to do one of the coolest things I’ve ever done. I got to see the characters from my book Finding Love in Big Sky come to life! 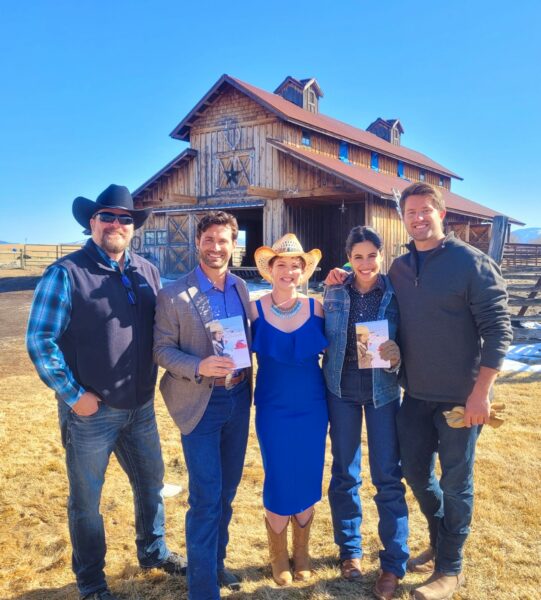 Josh was the first character I met: 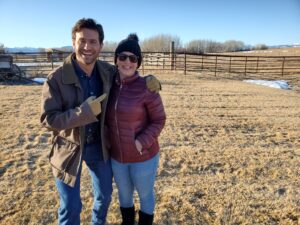 Johnathan Stoddard was so engaging, intelligent, and giving. He got into acting as a kid, and after starting to pursue a couple other careers as an adult (like culinary school), he asked himself what he would do if he were already a millionaire and could do anything he wanted. The answer was that he would act. He also works with a Facebook network that makes those inspirational poster board videos. I didn’t even know this when I just randomly had the realization that, “Hey, last year at this time I was going through chemo. Now, not only did I survive cancer, but I’m living my dream. I should make one of those poster board videos.” He took over from there, directing me and filming it on his phone. We had one shot to film and had pretty much commandeered the movie extras to join us. I haven’t seen the video yet, and I’m not sure what will happen with it, but I’m honored that Johnathan was willing to pursue the idea with me. Just like the real Josh would do. 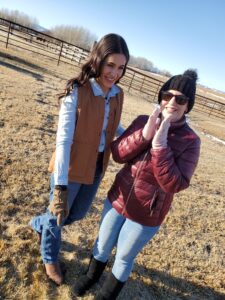 I apparently clapped when meeting Hedy Nasser. She has the most radiant smile, and she makes everyone around her feel like they are the VIP. My mom just kept saying, “She’s so natural and wholesome.” Which she really is. But she’s also a total goofball, dancing and joking between scenes. She took riding lessons for this film and thus didn’t need her stunt double as much as expected. Though they became really good friends through the filming. Her double and I were both extras in the cowboy ball, and there’s a part where she hugs the two of us. She’s currently still in Montana filming, so if you click here, you can follow her stories on Instagram for more fun peeks behind the scenes.

Then there was Sam: 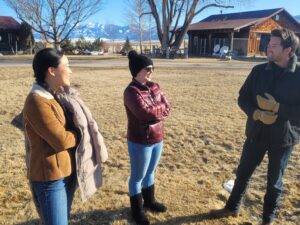 I didn’t get a picture with only Nathan Kehn. Probably because he never stood still long enough. The first time I saw him, he was on the cabin balcony, pumping his arms in the air. When he was in a dancing scene, he looked like he was about to burst into a dramatic rendition of The Tango at any moment. When other characters were riding horses, he would be filming them on his own camera then adding funny filters like fire and lightning. He proudly told me about the scene where he got to tackle Josh in the snow and how great it was to act like a brother to Paisley by shoving her around or teasing her about her wardrobe. Before filming, I’d checked out his IMDB profile with all his serious model poses and absolutely did not expect him to be the one keeping us in stitches. His Instagram is another story, however. The director told me that as soon as she checked out this profile, she knew she’d found Sam. 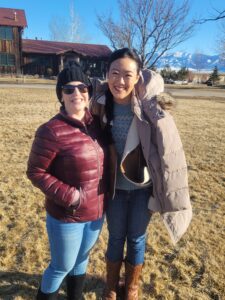 Raechel Wong was a sweetheart. When my boots were killing me in the cowboy ball scene, she brought me a stool to sit on. She balanced out Nathan, and the two of them played along when I asked them to cheer for my husband and me the way they cheered for Josh and Paisley in a kissing scene. Click here to see our performance. Jim was jealous of the role Raechel got to play in the movie because he wanted to be the mechanic. Because we didn’t get to see her film that part, she suggested that if Jim really wanted to be in her autobody shop, they should film him on a green screen and edit him in. There was no time for that, but it was cute of her to suggest. The director said there was talk about making the mechanic a male, but I’m so glad they gave the role to Rachael. 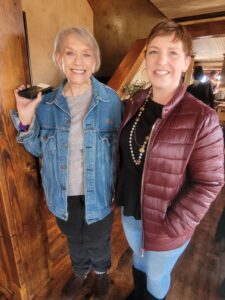 I thought I got a photo with Dot too, but I can’t find it now. They were a great pair. And the scene I watched where Annabel filmed with Paisley made me tear up a little. Very well done.

Even Emily and Tracen Came: 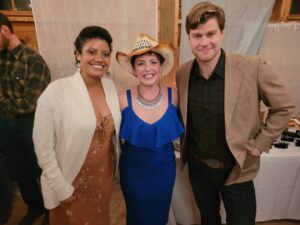 These were the main characters in my debut novel Love Finds You in Sun Valley. I didn’t know they were going to show up on this set. I was at the cowboy ball talking with the couple who played Josh’s parents, and Papa Lake mentioned having three sons. I was like, “No, you have five sons.” To which he responded with, “Wow! We did good!” and gave his fake wife a high five. But then I asked, “Why do you think you have three sons?” since I’d only met Josh and Sam. He pointed across the room at this guy. I said, “What’s his name?” Papa Lake said, “Tracen.” To which I started waving like a maniac and calling, “Tracen! Emily!” as if we were long lost friends. It’s nice that they were gracious. 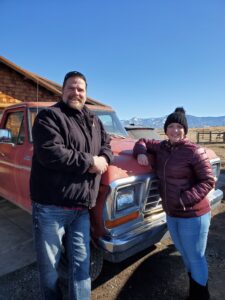 Apparently he broke down in real life too. (A method actor?) And with all the kissing going on while we were there, the name Big Red is also appropriate! 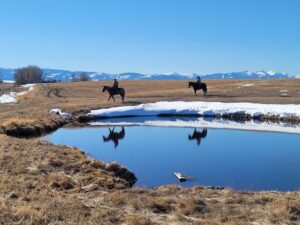 I’m so glad we got to watch some of the scenes with the horses. The day we were there, the crew started filming early because the ranch they’d rented had construction guys coming in to pour concrete in the barn. Everyone did their best to work around this unexpected and unavoidable scheduling issue, but the noise from the truck made the horses nervous, and the actors ended up filming the last horseback riding clip without even being on horses. Movies truly are magic. Click here for a clip. 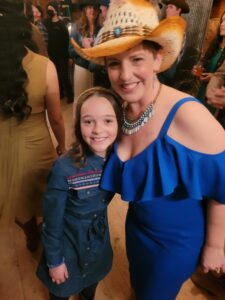 Last, but not least, this mini Montanan played the birthday girl at Paisley’s pony party. Many of the extras were recruited through the family that helped out with the horses. We all got to dance the night away together at the cowboy ball.

You also need to check out Paisley’s cabin and Josh’s BMW: 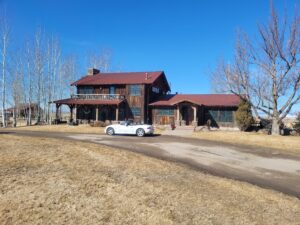 The small part of the cabin on the right was historic, then an architect bought it and added on. Just wait until you see inside. It’s incredible, and I hope to have writing retreats here.

The car wasn’t here when we first arrived, but when we came back after lunch, I saw it and just knew it was Josh’s car. It was like I have a FAIRY BOOKMOTHER who waved her magic pencil and made my dream come true.

I may be home now, but I’m still walking on air. I’ll keep you all updated on where and when you can watch Finding Love in Big Sky. You should have plenty of time to read the novel before it airs. And I hope you’ll find the casting as perfect as I did.

Who would you cast in a contemporary romance novel you’ve recently read?