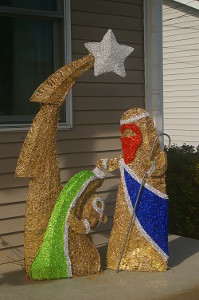 When I was a little girl, we spent Christmas Eve with my grandma and aunt. They lived in a four family flat in the city, the scene of some of my favorite memories. We went in the back door and hung out in the kitchen – the door to the living room was locked up tight! After supper, my sister and I would stand with our ears pressed to that door, waiting for Santa to turn on the music and let us know he was leaving. Strangely enough, we always ran out of bread and my aunt would head out the back door and hike to the little shop on the corner. It never failed – a minute after she had gone, the music began to play … but of course we must wait those agonizing moments until she returned. 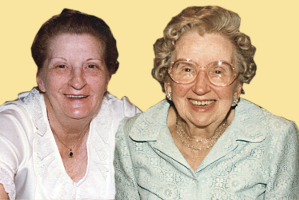 The small living room had been transformed with a silver tree in the middle of a miniature train’s continuous journey around the oval track. Packages were stacked everywhere and I knew that one or two, sometimes three, had my name on the tag. Though these gifts were almost never what I had asked for, they always turned out to be something I liked better than what I thought I wanted. One year, I got a Roy Rogers play set. Another year, a beautiful ballerina who could actually rise up on her toes. The rest of the evening we played with our new toys while the adults laughed and acted silly. There were cookies galore on pretty trays and nobody ever said you’d had enough. Those two ladies had such a knack for making a unique and memorable holiday experience, especially for children. 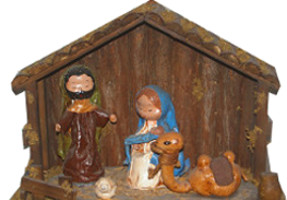 My family went to church only on rare occasion and the closest they came to a conversation about God was ‘Bless you’ if you sneezed. When my own kids were growing up, church was the focus of our Christmas eve. Who doesn’t love to enter a sanctuary decorated for Christmas, sing familiar hymns, and watch children act out the Nativity? Nothing says love like the Creator of love sleeping in a manger, come to save us all.

They say it’s hard for people to believe in God’s love if they’ve never experienced the love of their fellow man. Thanks to Grandma Flossie and Auntie Lil on those long ago Christmas Eves, I got a head start. What a gift it is to know that God loves me! He loves you too, whoever you are, wherever you are, whatever you’ve done or failed to do. Christmas Eve is when He proves it, by sending His son to live amongst us. May you have a very Merry Christmas!

The Marine's Mission by Deb Kastner

Meet the Moms by Laurie Larsen