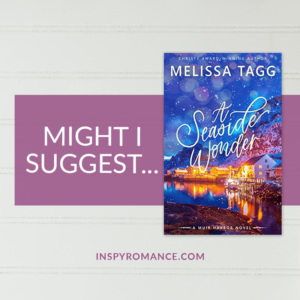 I’m in the middle of a writing break, which means more time for reading! I have so many Contemporary Christian Romance authors I would call “favorites.” At the tip-top of that list is Melissa Tagg because her stories are consistently entertaining with deep characters, rich plots, and the most satisfying romance. Just this week I cozied up with her newest release, A Seaside Wonder, and decided I just had to tell you about it.

First, read about this book, the second in Tagg’s Muir Harbor series, then my thoughts and reactions.

Description for A Seaside Wonder

In one evening, Indi’s world falls apart. Enter the shy professor her family mistakes for her fiancé…make that ex-fiancé.

Professor Philip West never wanted to return to Maine . . . or his grandfather’s miserable old house. But after his mother’s death, he’s now the guardian of a teenage half sister who doesn’t want anything to do with him. He longs to help her heal, but he’s exhausted and numb, desperate for relief of his own. Maybe that’s why he’s so easily distracted when he happens upon the little shop with an intriguing owner—one who happens to share a name with someone from his grandfather’s mysterious past.

More than a decade has passed since Indi Muir made the heartbreaking decision she’s never recovered from—though she’s certainly tried. She has a full life running her shop and creating the artsy pieces that fill its shelves. If she can just stay busy, she’ll keep her hurt and regret at bay. But when her ex-fiancé returns to Muir Harbor, he brings news that shatters her carefully built walls. Things only get worse when lurking danger comes calling at her childhood home.

The one bright spot amid Indi’s turmoil is the shy stranger who wandered into her shop months ago and his moody but lovable sister. As she confronts her past and the mysterious threat facing her family, she’s intent on helping Philip win over his sister. He just might win over Indi, too, if they can overcome old secrets and wounds, outrun rising peril . . . and take a chance on love. 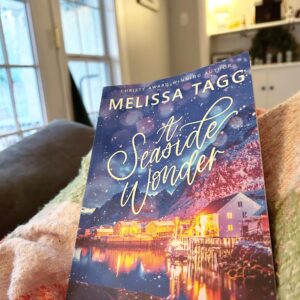 Just as I did with the first book in this series, Autumn by the Sea, I devoured this story! What I’m most taken by is Tagg’s sensitive, poignant handling of adoption from the perspectives of so many characters…those who lost loved ones and found “family” through so many different circumstances. Her careful layered construction of both main characters, Indi and Phillip, left me caring for them early on in the book as if they were dear friends whose well-being I was invested in.

While this book could probably be read as a stand-alone, I’d highly recommend reading after the first book. While Tagg does recount some details to explain a few things, a few might come off as spoilers if you’ve not yet read the first. With that said, this series might be the best I’ve read yet that leaves me to anxiously await the next installment!

Finally, a note about the author. Whether or not I read the author’s acknowledgment at the back of the book is hit or miss. I’m so glad I read Melissa’s at the end of this story, to discover how much she pushed past and through to see that Indi and Philip’s story was told. I’ve been there as an author, burnt out and content to let other areas of my life be enough. But oh, the undeniable call to create. It’s sacred but it sometimes asks of us sacrifice and angst and an exhausting perseverance.

Like Indi’s “messy” life, I have come to greatly appreciate books that are messy. That exemplify our own complicated lives and remind us that God’s in the middle of it all. Thank you to this author for not shying away from that.

What book have you read recently and would recommend? Tell us about it in the comments.