Author’s Note:  There are some scenes that just stay with you forever. This is one of my favorites. Enjoy…

It seemed the height of insanity to be out here on a vacant field celebrating when he hadn’t heard from her in 48 hours. Why did everyone else seem to think it should be so easy and logical to just go on as if he’d never heard the name Sage Wentworth? Ugh. It was making him crazy. Luke checked the cell again. Nothing.

Why did he think it would be any different than the last 52 million times he had checked?

At the last second Sage grabbed her cell phone off the desk. The last thing she wanted was to be reamed out for getting separated and not calling them. In the van as the others talked about the coming evening, she sat in the back, scrolling through message after message. Why didn’t he just give up? Any sane guy would.

The rain had washed the hillside in green, and Luke found a spot just off center from where the main display would happen. He’d been doing this since he was a child, so he had it all pretty well figured by now. Everyone would come, bring their blankets, scatter out, watch the show, and then pack it all up and fight the crowd out of the gates and back home.

It was a tradition, strange as that sounded. His parents were somewhere in the melee he was sure, but he hadn’t come with them. That’s what getting older and having your own transportation did for you. Freedom or at least a modicum of it.

Folding himself onto the grass between two people with radios, he let his gaze slide over the others. He was sure if he looked hard enough he might find someone to sit with, but he wasn’t sure that would even be worth it. There were still questions floating around that he couldn’t answer and others he didn’t want to hear asked.

The fading of the sunlight brought on the little overhead portable amber lights and the flashlights. Some people were smart enough to plan ahead like that. He couldn’t be counted as one of them. That was okay. He didn’t need good lighting or a blanket or friends. However, he would take one friend, not that he could be so lucky.

The Lawrence crew poured out of the van and headed in disparate directions.

“Meet back here right after,” Mrs. Lawrence called after them, but if they heard her, they didn’t respond.

Sage tugged at her sweatshirt, okay, Hannah’s sweatshirt, wondering what her place in all of this was. She had no idea. It wasn’t that they wanted her here, so why not just leave her at home? Good question, but one she didn’t dare ask.

That was both welcome and horrifying. “Oh. Okay.” She turned and carefully avoided the cars parked all over the field. On the downhill slope, she held her balance very tightly. The last thing she needed was to face plant in front of the whole town.

Strange how even out here, in the almost darkness, she felt the watching eyes and the whispers. They would never leave her alone. She knew that now. Picking her chin up and pulling at the bottom of the sweatshirt, she made her way to one small vacant plot of land. Families, people, teenagers, children they all milled about, laughing and talking. In the midst of them, Sage sat down, feeling utterly invisible.

With one glance, Luke sat up. Twenty yards away off to his left, but it was her. Definitely her. He looked around, behind her, in front of her, all around her. No one. No one that she would know anyway. His gaze fused to her as she stepped between and around a few people before she sat down on the grass, and his heart assessed everything about her.

She pulled her knees up to her chest and held them there. The jeans curved perfectly. All he wanted to do was get up and go over there and sit with her, but his gaze swept the town scattered out around them. Her parents were surely here, and Jaycee too. Luke took it all in even as he watched her, sitting there in a sea of people all alone. A moment and thought struck him.

Probably not, but maybe…

Sage was trying her very best to blend in and not be conspicuous about sitting out here all by herself. She was glad for the sweatshirt because the wind had picked up a bit, and there was a hint of the remembrance of rain. Just as she leaned back trying to figure out where the fireworks might start, her phone beeped.

Great. Here five minutes and she was already in trouble. She dug it out of her pocket and swiped it on. Hey, beautiful.

Luke. Sage didn’t think it all the way through before she looked up and around for him. Not spotting him, she bent over the phone.

She read the message and then very carefully turned so she was looking back and to her right. Why couldn’t she stop the smile when she saw him? It made her sad for him to be that close and yet so very far away. Going back to her cell phone, she typed, Nice night for fireworks.

They let you out of the house?

Let me? I was forced to come at gunpoint.

Okay, not quite gunpoint, but my coming was not exactly optional.

Luke read her message, loving that she was finally talking to him again but hurting for the raw deal life had dealt her. Mind if I join you?

That message about had her running for the exits, and she typed her answer frantically. Don’t, Luke. Seriously. Not here. Not like this. She typed it, sent it, and turned around to look at him as he got it and read it.

Not like this, he read once and then twice. Not like what? Not like they liked each other? Not like she meant something to him? Not like… He looked up and caught her gaze. She shook her head with a sad, soft smile. Not like this flowed through her eyes. He had seen that smile before, and he knew what it meant.

When she turned back around, Luke considered sending her another message, and then he decided this one should be delivered in person.

Gluing her gaze to the display area, Sage forced air into and out of her lungs as she rocked back and forth, trying to dissipate the sadness and hurt surging through her. How she wished he could come and join her, but they both knew better. They did. They both knew it was better this way…

Sage turned with a snap, saw the boots, the jeans, and her gaze jerked up to him standing there, outlined in the amber light. “Wh…?”

“I said.” He put one hand on the ground and just like that he was sitting right next to her. “Is this seat taken?”

Backing up as fast and as far as the crowd would let her, Sage looked at him in horror. “Luke, what’re you doing?”

He shrugged and looked at the front. “What does it look like? I’m watching me some fireworks.”

Well, that was certainly one way of putting it, Sage thought as her gaze snapped around them. Oh, yes, other people had already seen. She spun her arms in front of her to ward off what they were clearly surmising.

“You need to go,” she said, shaking her head. “Now before anyone sees you.”

“No, seriously, Luke, you should leave. I don’t want everyone to be talking about you too.”

“Well, if they really want to talk, we could give them something to talk about.” He looked at her and bounced his eyebrows, and Sage felt herself gasping at the thought. “Look, I’m right here.” Reaching over he took her hand in his. “Right where I want to be.”

Her gaze fell to his hand now entwined in hers. It was so warm, so amazing. “Luke…”

“Sage,” he said softly, and she had no defense against that voice. Her gaze came up to his eyes, and worry for him coursed through her.

“Look, I’m not a jock,” Luke said as if he wasn’t sure she didn’t know that. “I’m not a braniac. In fact, I’m kind of a loser if you want to know the real truth. But I’m still here right now with the prettiest girl here, and I’m not leaving.”

Sage’s heart melted for him. How could he think such a thing? “You’re not a loser. Don’t ever say that.” She let out a breath and shook her head. “The truth is, I really don’t want you to leave. I really want to watch the fireworks with the nicest guy here.”

He tilted his head and smiled. “Okay. Then let’s watch us some fireworks.” Carefully he turned and laid down on the ground just as the lights snapped off around them.

What to do. How to do it. And then he took hold of her and pulled her down into the crook of his arm. Sage curled there having never felt so safe or loved. 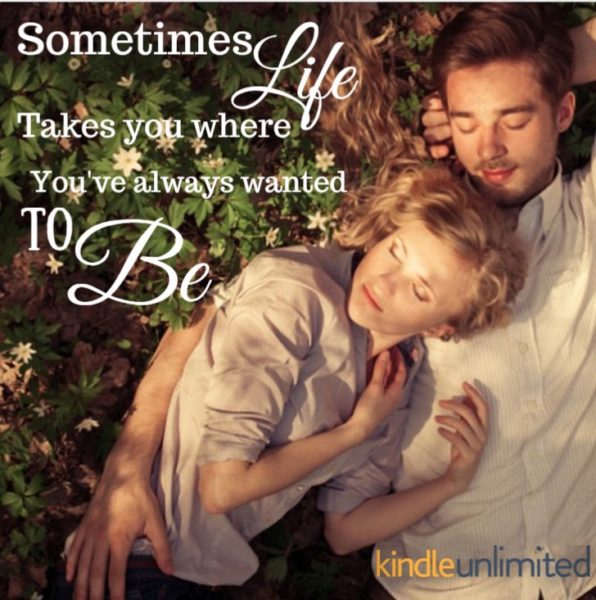