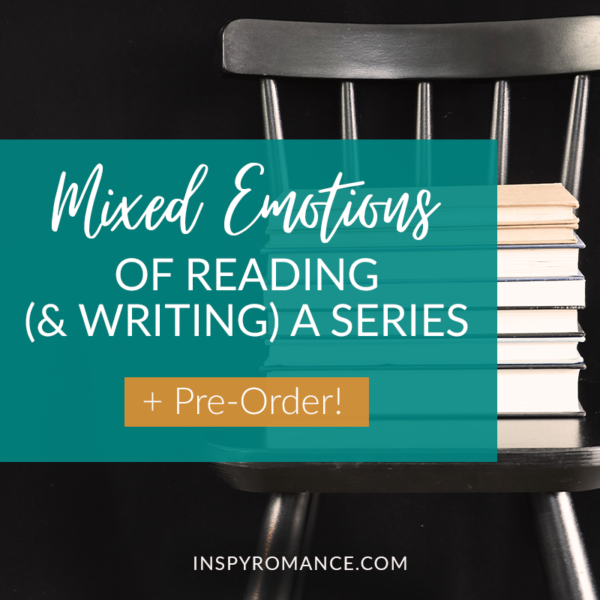 Last week, I revealed the cover of the fourth and final novel in my Laurel Cove Romance (LCR) Series. I’ll tell you more about that in a bit, but I’m as my series draws to a close, I’m dealing with a mixed bag of emotions.

Since 2014, when I began to write Someplace Familiar, my debut novel and the first book in the LCR series, I have spent countless hours visiting the fictional mountain town of Laurel Cove, North Carolina. Inspired by my best friend’s hometown of Burnsville, NC—one of my favorite places on earth—Laurel Cove allowed me to go whenever I wanted and introduce readers to the charm, Southern hospitality, and beauty I’d always found there in real life.

More than seven years later, I’m getting ready to close the chapter on Laurel Cove when Say It’s For Good releases in February. These four books, four different couples, and four happily ever afters represent a once small idea, the decision to go for it, and countless hours of hard work and determination. Standing closely behind the happiness and pride in myself for sticking with it is a little bit of sadness. It’s saying goodbye to old friends and a place that felt safe and comfortable.

In many ways, though, this ending is only the beginning for me as a writer. I’m now “free” in the most exciting way to dream about what’s next. I’m sure I’ve got another series in me, but maybe I’ll write a stand-alone novel (or two or three), too! The choice is thrilling!

As a reader, I love book series too. I often feel sad when a good book ends, so a series allows me to continue visiting an endeared place or spend more time with beloved characters, even if they only make an appearance in subsequent books. If I happen upon a series by the time all the titles have already been released, I can also devour them one after the other.

Books in the Laurel Cove Series

Say It’s For Good is set to release February 22, 2022! You can pre-order now HERE, and if you email me proof of your pre-order and your mailing address I’ll send you some fun book-lover swag (while supplies last)! Below is a little bit about Leah and Jasper’s story. 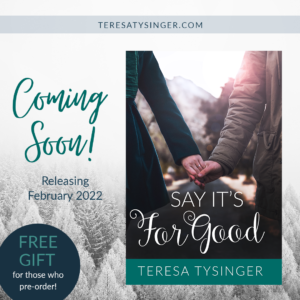 Is a decade enough time to heal old wounds?

Professional chef Leah Spencer is level-headed, responsible, and practical—making it an easy decision to move home to Laurel Cove, North Carolina to care for her ailing father. All he wants is for his only child to find love and partnership like he had with his late wife—before he leaves her all alone. Desperate to ease his worries, as well as her own, she breaks character and creates a fake relationship with the one man in town who likely wants nothing to do with her. And the one man she’s ever truly loved.

Ladies’ man Jasper Bowdon has successfully avoided commitment ever since his heart was broken a decade ago. Casual dating, however, had grown tiresome and he’d recently decided to take a break from women to finally figure out what he really wants. Why, then, does he agree to a pretend relationship with the very woman who’d ruined him in the first place? And why is he left wondering if it could all be part of God’s plan to heal them both?

Are you are drawn to books in a series or prefer solo novels? Why or why not? If you do like series, do you prefer each book to stand alone (like in the LCR Series, maybe just sharing a setting or characters who are part of a family) or do you enjoy it more when each book is a continuation of the story from the last? What are some of your favorite book series?