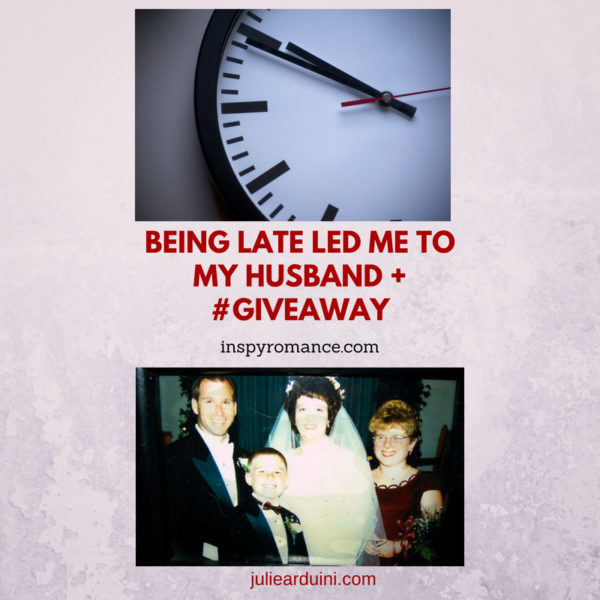 I can’t believe it, but on this day 22 years ago, I was upstairs in our church loft, wedding gown on, ready to walk down the aisle, watching guests arrive and park across the street as I peeked out the small window. Organized to a fault, I’d padded the schedule to make sure nothing, no-thing, went wrong on our wedding day. And it truly was a perfect day.

I thought I’d share our beginnings, because it is a sweet story. Most people don’t know I was friends with Tom’s family before I even met him. During college I had worked at a shoe store and the assistant manager was his sister-in-law. One night we got to talking and we discovered a lot of things. We became friends and she invited me and my sister to join her at her in-laws for dinner. The Arduini family, six children strong, met each Sunday for dinner. To Tom’s parents, everyone was family. As weird as I felt inviting myself, it took seconds to realize we were included. The Sunday dinner became a routine, and it didn’t take long before my sister and I hung out with the Arduini siblings whenever we could.

Tom was divorced and lived over an hour away, so he wasn’t around much. I saw his pictures around his parent’s house, but it became a running joke that he was the phantom child. I’d met him in passing at a dinner, and again at a party, but no introductions were made. One time he talked and eluded to the fact that he was a partying man. I was a new Christian, so I remember walking away thinking the guy was a jerk. Once we started dating I told him about that time and he laughed and laughed. He was pretending to be up late doing wild things when in reality, he was up late re building a computer. I can tell you that story makes perfect sense!

Fast forward and I was struggling with a lot of things, including my new faith. One thing that hadn’t changed was those Sunday dinners. In April 1995, I was late getting to one of those dinners. I’d been at a missions event at church and that ran late, and the rest of my day was a catch up. By the time I reached the house, my sister, Tom’s sister-in-law, and all the local siblings were gone. I don’t even think his parents were around. But Tom was there with his two young children.

I remember bringing cruise pictures from my earlier vacation with my sister and I was frustrated I missed the chance to show everyone. I had them in hand and was ready to turn and leave when Tom said he’d like to look at them. I remember stopping and asking, “Really?” I didn’t know the guy, or his children, and I felt superficial showing them to him. He took interest and that little visit lasted hours as he asked questions about our vacation and about me. It set me back even further. I left thinking he wasn’t such a jerk after all, but my focus was on catching up with the rest of my day. I had another event to attend, and then would finally meet up with his family at the bowling alley. I asked him to please let them know I was running really late, and if he’d like to join us, come on out.

He did, but he forgot to mention I was running late, and that we’d spent hours talking. I was back to being frustrated, but Tom tagged along the entire evening, right down to hanging out at Perkins after bowling.

By the time I arrived home, my mom was still up and asked how my day went. I sighed and shared how frustrated I was because “Dave’s brother” was in town and because we took so long talking, it made me even later to everything else. She asked what I knew about him and I shrugged and said, “He’s older. Divorced. Two kids. He’s the phantom brother. He also doesn’t tell everyone when I’m running late like I asked him to.” And with that, I went to bed.

What I didn’t know was mom marked the day on the calendar. She used it for weather events, her appointments, and other important dates. She said she knew he was the one. Tom came home every weekend, and I thought he missed his mom. When he was home, he was attending church and being mentored. When he asked me out that July, he was a Christian all of one week. We were engaged that September, and married August 31, 1996.

Ours probably isn’t the first story Hallmark would run after, but it’s my favorite. The years have been full of stretching, blessings, and everything the vows mention, but I love the life we have. Those two kids are now adults, married, and have their own children now. We have a college aged son and a daughter about to enter high school. 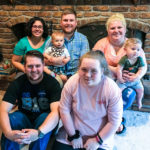 Our family today, minus our son-in-law.
Arduini Family photo credits

Dates I put on my calendar.

Do you put important things on a calendar like mom did the day I “met” Tom? Tell me about it and I’ll choose one random winner to win a copy of Entrusted, my first contemporary romance. It’s set in the Adirondack Mountains, where we had our honeymoon. USA winner has a choice of print or eBook. Anywhere else receives an eBook.