We’re moving this week and though I am excited about living closer to my family again, I’m not enjoying the process. Packing everything , navigating the maze of boxes stacked all over the house, notifying everyone of a change in address … and that’s just on this end! We’ll be an hour away from each of our kids but we don’t know anyone in Washington, MO.

There have been many times in my youth when I wished I could move away from my past and make a fresh start, like we are doing now. I was embarrassed and ashamed about choices I had made, and the resulting consequences, and believed a new address would magically wipe the slate clean. No more worrying about who I might see when I left the house. No more driving past scenes of unpleasant memories.

Given a do-over, surely I would veer away from guys who spend more money than they make, drink and smoke and cuss, and cheat. I would go back to school and emerge with a degree that would enable me to change the world, while making plenty of money. I would exercise and stay in shape, eat healthy, become a morning person, keep a clean house. I would be a perfect mother, given the chance to start from scratch.

Now that I’m older, I understand that a change in geography isn’t likely to change the person paying the rent or the mortgage. Whether I live in Branson or Washington, I’m going to stay up too late, put off vacuuming as long as I can, and eat too much chocolate. Now and then, I’m going to run into people from my past, who might be quick to remind me of my social gaffes.

The amazing thing I’ve learned though, is to be thankful for those big mistakes, even the life altering ones. Immersed in misery, I couldn’t stop seeking answers and solutions and eventually, it led me to the Book, the Good One, the Holy Bible. The minute I turned to the Lord, He picked me up, dusted me off, gave me a hug and set me on the right path … all without packing a single box. What we do makes us who we are and lands us where we are – which is always exactly where we are meant to be. 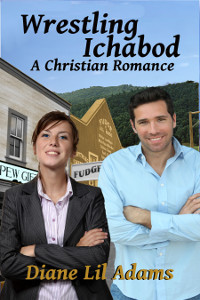 Lucie Johnston is looking for adventure when Cain Cantrell returns to town, looking for a loan. Lucie’s brother warns her not to get involved with his childhood friend, but Lucie is longing for the kind of adventure she’ll never find if she remains under the watch of her mother and brother. Suddenly, she finds herself in the mountains of North Carolina, married to Cain, working seven days a week in their gourmet chocolate shop. Six months later, when Cain is killed in an accident, Lucie has too much pride to go home a failure. She’s determined to make her little business succeed … does that mean Mark Henley, owner of the rival chocolate shop, must fail?

Leaving home with Cain was the biggest mistake of Lucie’s life, but the Lord can turn her bad choices to good. Thanks to some gentle prodding from an angel named Ichabod (or was that a dream?) she eventually lets go of her anger and pain and misery and opens her mind and heart to something new – the forgiving and healing love of the Lord.