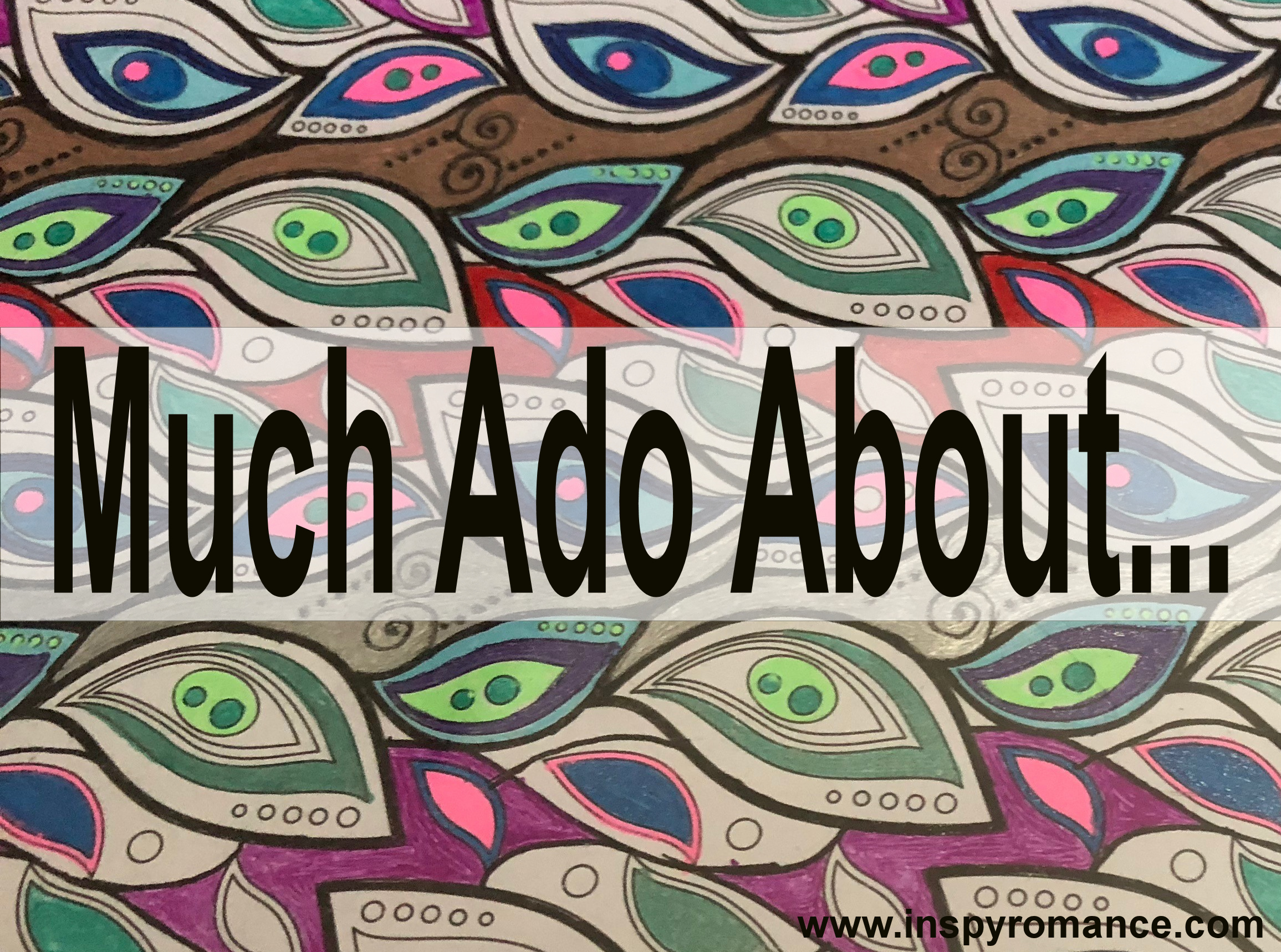 … a lot. The life of this author has been BUSY and not with writing. LOL

In case you didn’t notice, I’ve been absent for the last few months. I knew the summer would be BUSY, and I wouldn’t have the time to think, much less write blogs of any substance. 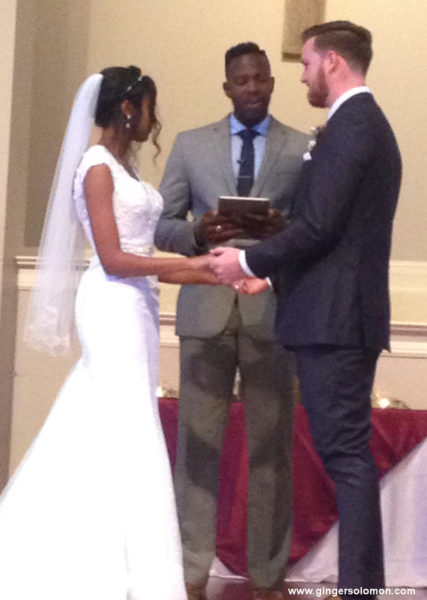 That’s my son and his beautiful new bride.

I never imagined any of my kids would marry anyone of a different color, but he has always surprised me. And before you stop reading, it’s not because I’m racist or a bigot (had to make sure I was redundant here and I wasn’t). It just never crossed my mind. I LOVE my new daughter-in-love as if she were my own. And, no, it doesn’t bother me that she’s black (her preference of description). She has a beautiful heart. She loves God. And she loves my son. That’s all I care about.

As Mom of the groom, I had the responsibility of planning the rehearsal dinner, which turned out to be less of a big deal than I expected, but as I prepared, I was stressed. Thirty-eight people were expected to show up to my HOUSE!!! While only about thirty wound up coming, I still had to prepare places for those people to sit. I have a big house (by necessity—remember, I raised seven kids here). I borrowed chairs and bought two six-foot folding tables to accommodate everyone. It turned out wonderfully, after I chilled about having everything perfect. :D (Get thee behind me, perfectionist!) 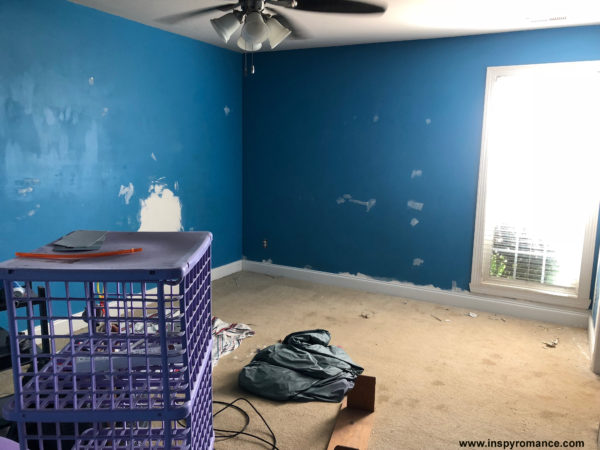 In addition to the wedding, I am redoing one of the bedrooms in our home (formerly the above son’s bedroom) into an office. It’s right off my kitchen and convenient to all that I do. Here are the before and primed pictures. My husband has to fix a few things before I can paint. I’ve chose a medium teal color for the walls. I have 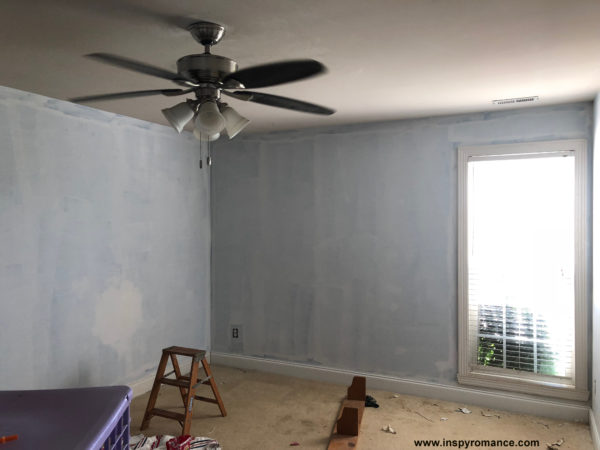 ALMOST decided to paint one of them gray/silver, but haven’t completely decided yet. :) The attached bathroom and small walk-in closet will be a medium gray.

I haven’t completely decided on the flooring yet, but I’m trying to talk my husband into a grayish wood-type flooring. The biggest issue is that the bathroom is tile and the kitchen is hardwood (real), and concrete is under the current carpet.

This is also happening: 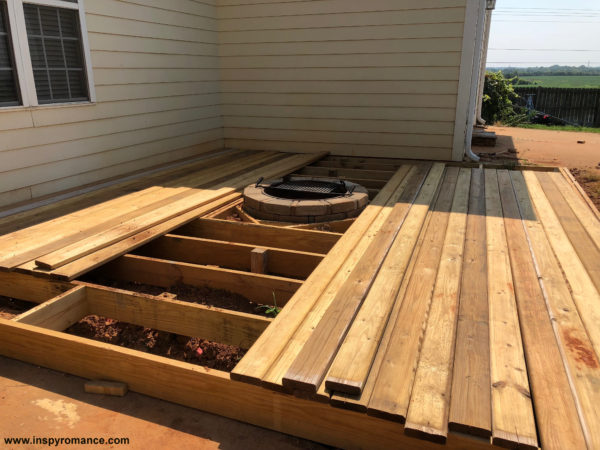 I forgot to take a before picture. This used to be a flower bed with LARGE hedges lining both walls except right in front of the window. The window leads into my eat-in kitchen.

The fire pit used to be farther out in my yard (like forever away). In the pic, I’m standing on the patio that leads into my family room. Just past the deck is another slab of concrete—I mean patio—that leads out of our mudroom (I think it was designed to be a Jack-n-Jill bedroom to my new office, but NEVER used as such) and to our pool.

We rarely used the fire pit before, so I decided that I’d like it closer to the house, hoping that the money I spent on it would actually be well spent if it were closer. My newly married son worked for a landscaping company for a while and conveniently forgot to glue said fire pit together when it was originally put in. We relocated it with ease, and he was kind enough to come out and reassemble it and glue it together. Our plan is to put benches along both walls (under the windows). It’s hard to tell from the picture, but this deck is pretty big—16×18. The four-foot fire pit looks tiny comparably.

Next week, my youngest daughter moves away to college. It’s only an hour and a half, but it seems like … I don’t know … half way around the world. ;) I can’t believe I’m old enough to have five grown children. Wasn’t it just yesterday when I struggled to go to the bathroom alone, and they needed me? <tears>

And lest you think my life is all about change and chaos, we’re also going on a cruise this month. I wish I could say it’s the whole family, but it’s not. The two oldest are unable to go. But the youngest five of my kids are all going. Not that I’ll see them much—except at dinner. Still, it’s something. And they’re stuck with me for a week. :D I hope to spend a lot of time writing/editing, but I’m not going to stress about it.

And talking about my writing …

My goal for 2018 was to release six new books. I highly doubt that will happen, but I hope to get four out before the end of the year. Two will be Christmas (CCR*) novellas, releasing in separate boxed sets (I know I’m crazy). I also plan to release the non-fiction I had planned to release in February. In addition to that, I have a series idea (also CCR), and I hope to get the first book ready and released soon. If not by December, then definitely EARLY next year. Please connect with me at my website for up-to-date announcements (either through my blog or my newsletter—both signups are at the bottom of my home page). *CCR=contemporary Christian romance

So there’s my summer in a nutshell. I hope I haven’t bored you too much. ;)