Having lived with the characters in Cowboy for many years now, it fascinates me how much they still teach me and others who read the book and want to talk about it with me.

Ashton Raines is the hero, and I think he kind of epitomizes where we all *think* we want to be–on top, successful, adored by many, hated by none.  He’s got the world at his feet.  As the reigning King of Country Music, Ashton appears to have everything he’s ever wanted and most of what everybody else dreams of having.

But the thing is it becomes obvious very quickly that Ashton is anything but happy.  In fact, there’s a large part of him that really hates his life and what he’s become.  Not because he’s become someone bad, but somewhere along the way on the road to super stardom, he lost himself. 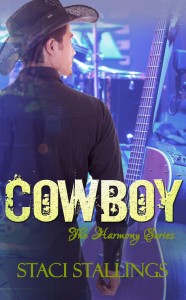 Whether we’re a superstar or not, I think many of us can relate to waking up one day, looking in the mirror and having no idea how we got here.  It’s like we pursue life and our dreams, and then one day we’re living this life we don’t even recognize.  Maybe we’ve got kids and a husband or we’re in a job we always thought we wanted, and we look around and it’s weird because we don’t even really recognize who we are anymore.

In the story, Ashton uses his fame to hide from his pain.  At least that was the idea.  His wife has died of cancer, and it nearly ripped him apart.  His plan to escape the pain is to pour himself into a whirlwind tour.  The problem is pain isn’t healed by escaping it, and the faster he runs, the more miserable he gets until one night, he simply can’t take it anymore.  After a concert, his manager comes up with a brilliant idea to help Ashton forget, and it snaps Ashton’s will to keep up the charade of the tour.  He gets in a rented car and drives, not knowing or caring if he’ll ever come back.

Beth McCasland is the sweetest spirit you would ever want to meet.  She’s seen her share of heartache when her husband passed away in a terrible accident.  Now she’s left to raise her young daughter alone, and she shoulders that burden with grace and dignity.

The thing I like most about Beth is she is so simple.  She sees someone hurting, and she’s determined to help.  Maybe she can only offer a meal and an ear to listen, but she is willing to do that.  The thing that breaks my heart about Beth is I think true of a lot of us who care.  When we go all-in to help someone, keeping a “safe distance” for our heart’s sake doesn’t always work.  And it’s so hard to really care and not get emotionally involved, especially if that person is someone we genuinely connect with on a deep level.

I think the depth of her love is really a reflection of how God is with us.  He’s always standing there with open arms, willing to take us in and comfort us and be there for us, and somehow, He loves us enough to let us go again with no real guarantee that we’ll come back.  It’s such an incredibly vulnerable place to be.  For me, that was one of the hardest things about watching Beth go through the things that happen in the story, watching her suffer because of her great love.

I’ve had people describe Cowboy as Cinderella in reverse, which is rather interesting to me because in one sense, Ashton is the Prince on the white… okay, tour bus.  But many readers have said they really felt Beth is the one to rescue him from the pit, which is also true.  I don’t know. Maybe sometimes in a relationship we’re equal parts the one saving and the one being saved.  I certainly think that’s true of this story.

The truth is I love these two characters.  They’re like old friends now, and I love this story.  Every time I read it, it makes me want to fall in love all over again!