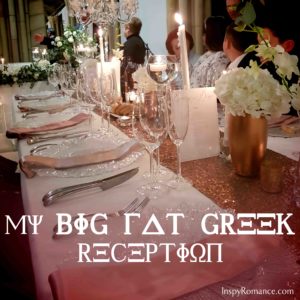 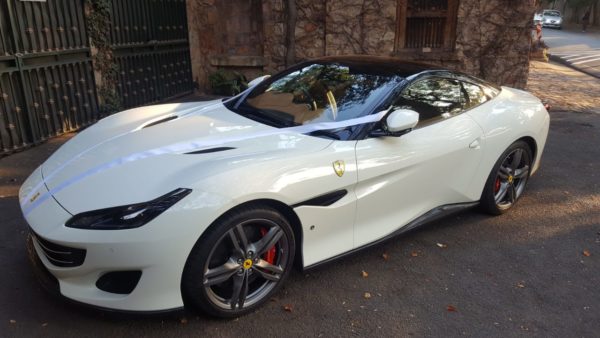 So, picking up where I left off, after the bride and groom left the church, chauffeured in a white Ferrari (I kid you not!) belonging to one of the guests, we drove across to the reception venue. The area we passed through became somewhat dodgy, and I started to get a teensy-weensy bit concerned. Do you say dodgy where you come from? Probably the British English side of me coming out because the dictionary says the word is chiefly British and means risky; hazardous; chancy. I guess you get the idea … we were going through a less desirable part of one of the suburbs of Johannesburg. But when we turned into a gated entrance and were greeted with the most stunning venue set against the side of a hill, I released a relieved sigh. I should’ve known this family would only choose the best place to celebrate this union.

Without trying to describe the place to you, I’ll let a few photos speak for themselves. 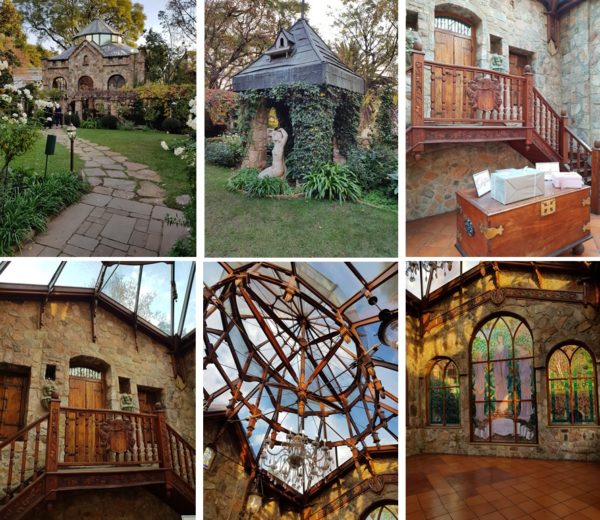 Isn’t it beautiful? Ha, and that was only the small chapel-like room we walked through to enter the pristine gardens and reception halls. This is where the gift table was placed and you’ll see a few of those gifts already there. I must admit, some of the guests arrived with HUGE boxes all ribbon and shiny-paper-wrapped, which made mine feel really small.

Seriously, back to the photos of the venue … and the reception.

Because the wedding ceremony was shorter than the bridal couple had anticipated, there was a longer wait for the reception dinner’s start. But with an open bar and an array of finger foods making their rounds — fried haloumi skewers, prawn tempura, fruit skewers, and a couple of other plates that didn’t make it to our corner of the garden — guests were not complaining. During that time, the bride and groom mingled with the guests in-between having their wedding photos taken … some of them way up in that structure in the last photo in the set below. 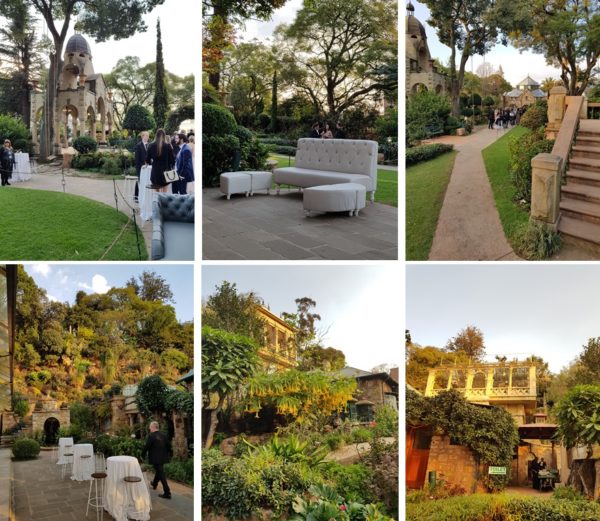 The reception hall with its open drapes was every bride’s dream, and even though we were at the cusp of winter, we stayed toasty inside because big, umbrella-like gas heaters warmed the room and the tied-back curtains were closed. With no dance floor and a not-too-wide aisle between the two rows of tables,  I wondered where they would dance. There had to Greek dancing and plate breaking, surely? But after dinner, everyone moved to a bigger hall where there was loud music, plenty of dancing and plate breaking, and yum … wedding cake and dessert. But, I’m getting ahead of myself here. First let me show you what awaited us inside (and outside) that beautiful glass-roofed structure. 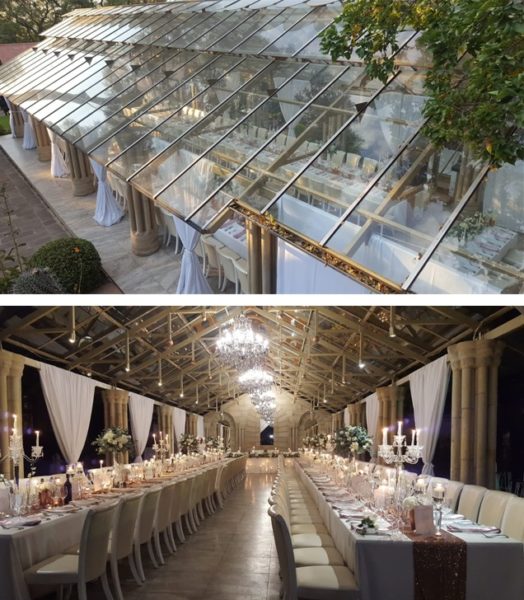 I loved the way the room was set … two long tables that seemed to go on forever. It was the first wedding I’ve been to where I didn’t sit at an individual table of eight or ten.

The first two courses of dinner were interspersed with speeches from the father of the bride (aka Dustin Hoffman, and it wasn’t until he said it that I saw the resemblance LOL), the best man (brother of the groom), and a very quiet and nervous groom. The menu certainly got our taste buds watering. There was a trio of starters: Chicken Souvlakia served on Tzatziki (Greek of course), a roast butternut and beetroot salad, and grilled brinjal (aubergine). For the main course, we had a choice of two meals. Hubby and I chose differently — he had the spinach and feta filled chicken fillets, and I the roast beef fillet. Then we shared (sort of). Of course, each item on the menu came with its own trimmings and sides. Maybe you can read the full menu from the small picture in the image below. 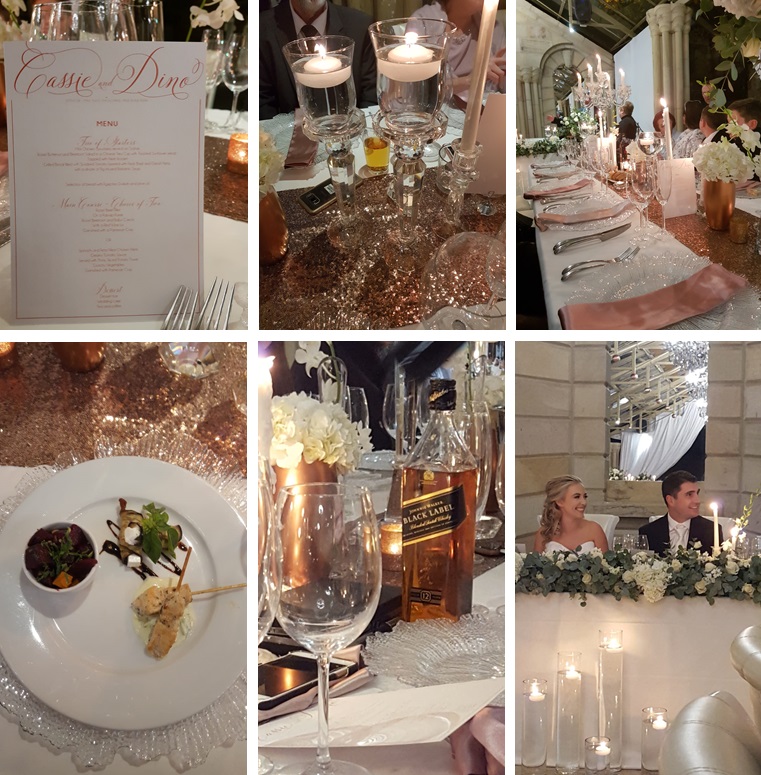 The wine was REALLY special (and tasty) … a 2006 vintage. I was surprised the bridal couple managed to source a thirteen-year-old wine and more than intrigued as to their choice. Later, my suspicions were confirmed — for the bride and groom, that was a special year because it was the year they started dating. What a lovely and sentimental touch to the wedding.

Now before you start thinking this is a kind of Jacob and Rachel love story, it’s probably more the story of a very patient bride. The sentiment certainly seemed that everyone at the wedding couldn’t have been more happy that they had finally tied the knot (there were a few jokes made by the master of ceremonies about that). 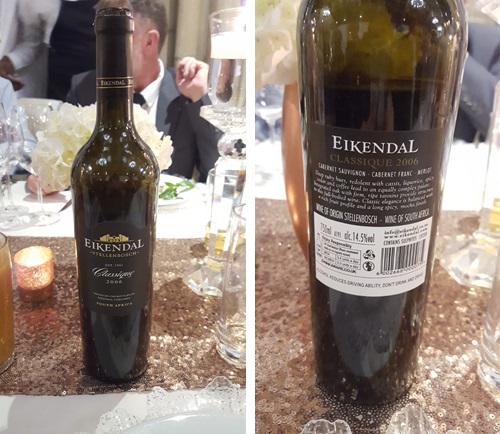 After an enjoyable meal, wedding favors were handed out to the female guests. I have to admit that, as unusual and tastefully done an ornament as it was, I still have no idea what to do with it. When we were handed the favor, we were told that this eye was to ward off evil spirits. Um yeah, I have Jesus and a host of angels so I definitely don’t need some metal ornamental eye to keep me safe. The idea came to mind though, that if I took my mother-in-law’s favor and mine, I could perhaps do some kind of Picasso piece of artwork and utilize these gifts. Hmm? 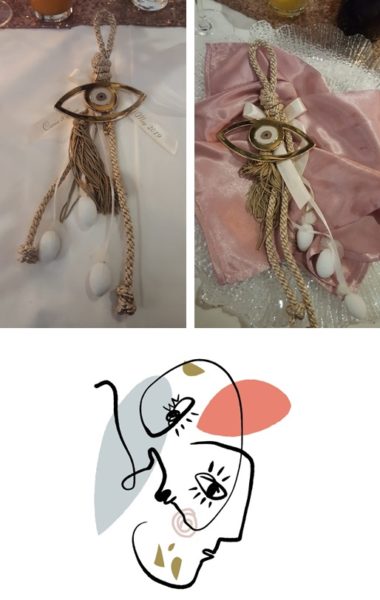 Oh, speaking of this gift, at least there are still three little sugared almonds in those pieces that need eating so not all is lost on me. I researched wedding favors at Greek weddings and discovered that it’s always an odd number of almonds to symbolize that the united couple can’t be divided. I guess maybe I put an odd number of sugared almonds in my little gifts when I got married, because hubby and I just celebrated our 34th anniversary on Saturday. But having Christ as the center of our home, is certainly the reason our marriage has lasted and been a happy one. This all reminds me of the scripture verse in Ecclesiastes that says a cord of three strands is not quickly broken.

Finally, we moved across to the party room where the usual traditions were enjoyed … throwing the bouquet and garter, cutting the cake, and dancing. But we mustn’t forget those mouth-watering desserts. It wouldn’t be fair for me to write this blog and not show you those, would it? (Or is showing them being unfair to you, LOL?) 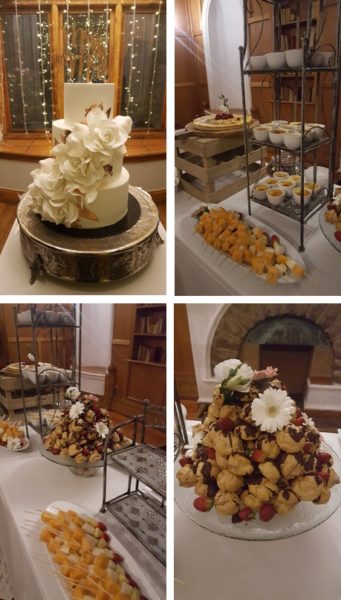 During this time, the music became louder, and plates started crashing to the floor. Now, I’ve been to a Greek restaurant before and tossed a plate or two, but this was something unlike I’ve seen before. The men would come to the dance floor and literally smash a STACK of plates at one time. I found the entire ritual fascinating, because generally there was only one male on the dance floor, stomping through the broken ceramic. Oh, and those bottles of Black Label whiskey you might’ve caught a glimpse of in one of the photos… Well, much of the amber liquid was poured out onto the floor and set alight. The guy on the dance floor then wove his way through the low, blue flames.

Intrigued, I asked my husband’s cousin (the mother of the bride)  why there was usually only one male dancing through the flames and plates. She explained that the swaying movements are supposed to be indicative of a drunken man, and dancing through the flames is him facing his demons. Of course, I went and researched this to write this blog and discovered that this moody, solo dance is called zebeikiko. It’s considered a state of mind (and a philosophy) where the dance is performed with your soul, not your body.

As was the case at this wedding, the audience gathers around to cheer and clap.

It is apparently considered bad form to steal another’s zebeikiko, hence one guy dancing at a time. The only time I saw three men on the floor was when the groom, his brother, and their father danced the zebeikiko. I guess keeping it in the family is okay. Then again, perhaps it was some other Greek dance they did that permits more than one.

I’ve added a video we took of Dustin Hoffman, I mean, the father of the bride, dancing the zebeikiko. You’ll see everything I’ve spoken about above. Oh, and he really gets started around the 50 second mark so be patient.

After several zebeikikos, and many, many broken plates, the crowd got down to my favorite dance, the sirtaki. Likely one of the most famous Greek dances, it actually only dates back to the 1960s when this dance was created for the movie, Zorba the Greek. Oh, those slow then fast alternating steps — 82 beats per minute, working up to a frantic 163 beats per minute — danced in a line or circle formation, hands on the next person’s shoulders, just make you want to kick off your shoes and join in the fun. And for a split second there I might’ve considered it. But barefoot wasn’t an option with all those broken plates, and me and heels just do not go (especially not on a dance floor slippery with whiskey).

When my 82-year-old mother-in-law could stand the loud music no more, we said our goodbyes to the parents of the bride and made our way home. And we did need to leave — we had about a 45-minute ride home and I still needed to pack a suitcase. You see, between the wedding ceremony and reception, I had booked myself a flight to Cape Town early the following morning with my sister to go down and look after my niece who had just had an operation.

With the sounds of Zorba the Greek still ringing in my ears, strolling on the Golden Mile beach where my niece lives not far from St. Helena Bay on the west coast of South Africa, white houses with gray roofs dotting the coastline, I’m sure you’ll forgive me for sometimes thinking I’d perhaps taken a wrong turn and ended up in Greece for a week. 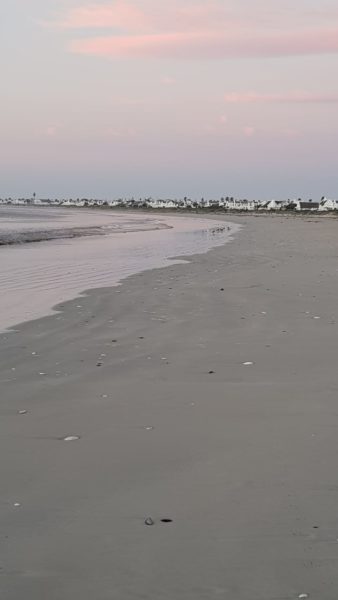 Before I say goodbye, I do need to let you know how many plates were ordered for breaking at the big fat Greek reception. Would you believe me if I said three hundred? Now, I’m not sure whether they all got broken, but those Greeks were only just beginning to party when we left around ten-thirty p.m.