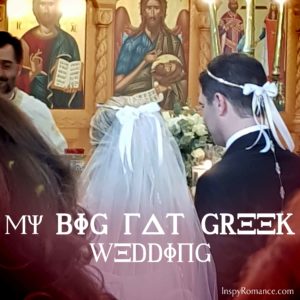 Well, not MY big, fat, Greek wedding, but the first Greek wedding I’ve attended… That happened on Saturday when the daughter of my husband’s cousin got married. It was fun, fun, fun!

Today, I want to tell you all about it.

The morning started off with a frantic dash to town for hubby and me. He needed a new pair of black suit pants and I needed a pair of blue shoes to match the dress I’d borrowed from my daughter-in-law. The panic started a night a two before when I examined the invitation and realized the dress code was formal. Not smart-casual or smart… Formal! But when we sat inside that Greek Orthodox church on Saturday afternoon waiting for the bride to arrive—the men around the church looking like the mafia in their smart, black tuxedos—hubby leaned over, breathed a sigh of relief, and whispered how glad he was that I had talked him into wearing a suit and tie. He looks really good in those modern, skinny cut pants, don’t you think? 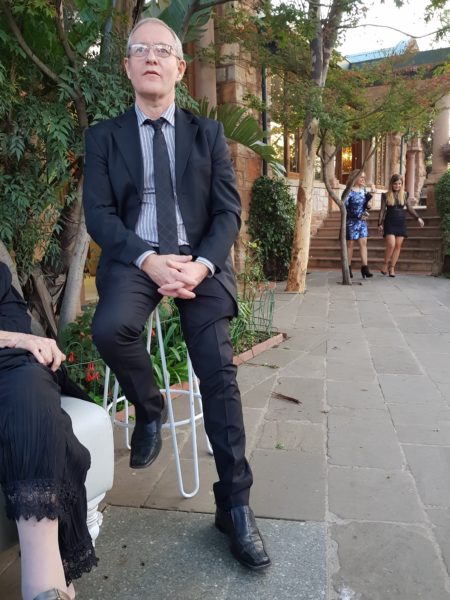 But I digress, back to the big, fat, Greek wedding.

We left home fifteen minutes later than planned, but riding in the slipstream of a police convoy for some or other government official, we quickly made up the lost time and arrived at the church with five minutes to spare. Whew!

The interior of the church was magnificent, the painted domed roof one of the many things that held our attention. The other was a member of the clergy. According to me, which hubby found amusing, the young man in his flowing white and gold robe, hair trailing his shoulders, looked a little like Jesus. 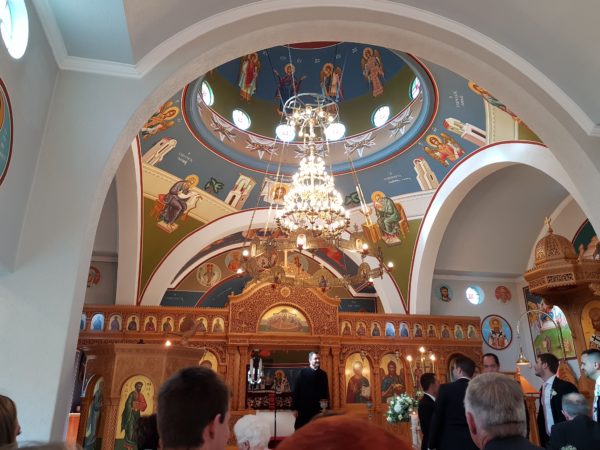 We didn’t wait long for the bride to arrive. When she did, the guests rose to their feet. I’m not sure if that was the first of many rituals at a Greek wedding, or if someone just forgot to tell everyone to sit down after the bride had entered, but we stood the entire ceremony. On looking at images of Greek weddings on Google, however, I see that standing seems to be the norm. Unfortunately, it made seeing what was happening up front between the priest, bride, and groom somewhat challenging. 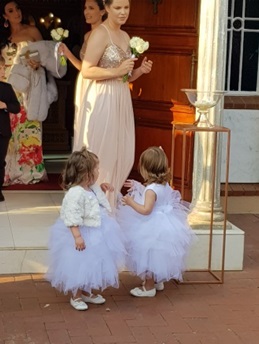 Before the bride walked down the aisle, two young boys in suits entered, bearing the rings (I think). A chanter’s voice filled the sanctuary. Then came the bridesmaids dressed in soft, dusty-pink chiffon dresses with sequined bodices. Two of the bridesmaids each held onto the hands of a toddler dressed in a cloud of white tulle. Then a slightly pregnant bridesmaid graced the red-carpet.

Reaching the end of the aisle, the father of the bride lifted her veil and kissed his daughter goodbye.

A mature woman dressed in a black outfit had followed the bride and her father down the aisle. I think she was the groom’s aunt. I learned through researching for this blog that she was the koumbara, a role of high regard similar to the Maid of Honor in an English wedding. Likely she was the groom’s godmother because tradition states that the godparents of the groom are asked first to fill this important role.

She played an active part in the ceremony—probably way more than what my limited view between two guests offered—and I did see her helping with the stefana. The stefana are the wedding crowns that are swapped back and forth three times between the bride and groom. The couple, wearing these crowns, then circle the altar three times as a married couple. This Dance of Isaiah or “ceremonial walk” follows the common cup (mentioned later) and signifies their journey through life together. The stefana symbolizes the union of two people into a single couple. The marriage is viewed as creating a new kingdom, hence the “crowns”, the bride and groom king and queen of their home and family. You will notice the traditionally white ribbon for purity uniting the bride and groom in the photos below. 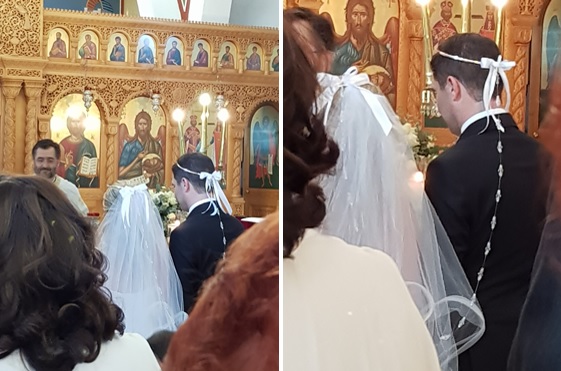 I’m sure the koumbara did far more than just helping with the stefana though, as there are many commitments attached to this role. The best man, known as the koumbaro, also has several duties to attend to like helping to shave the groom before he gets dressed for the wedding, signifying trust.

The marriage ceremony was interesting. The priest repeated the same words three times in English and probably the same number of times in Greek when he blessed the rings. He did something similar holding up a large Bible with a metal covering. Then again with the crowns and probably with the cup too.

The number three, representing the holy trinity, is very symbolic and clearly evident during this part of the ceremony. While writing this post, I was reminded of last month’s blog that I wrote about The Power of Three.

The older priest, dressed in the same kind of robe as “Jesus”, did all the talking, or should I say singing because much of what was said, was sung. The bridal couple exchanged no vows.

I spent the following afternoon watching the movie My Big Fat Greek Wedding in preparation for writing this blog. I didn’t learn too much (probably because I kept falling asleep as I was exhausted from a sleepless night due to a sudden early morning flight). However, I did notice an interesting tradition dating back to ancient times—mimicking the act of spitting by blowing a puff of breath through pursed lips at the couple. Because of the rule of three, “spitting” this amount of times brings greater luck. I never saw anyone doing this to the bride or groom at my big fat Greek wedding, but that’s not to say it didn’t happen. 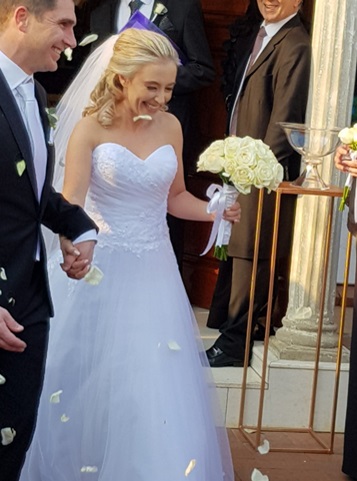 Here are a few other things that happen at a Greek wedding, and probably happened at this one…but I couldn’t see so I don’t know: the couple holding candles throughout the ceremony representing the light of Christ; and sharing the common cup where they each take three sips of wine. The cup represents a successful union. The latter did happen, that much I know.

The final blessing was bestowed, the ceremonial crowns removed, and the dismissal prayer read. While the bridal couple signed the register, wedding-goers emptied the church to wait outside. Armed with white rose petals, they showered the bride and groom as they exited.

I had to chuckle while reading an article called “27 Things That Will Happen At Every Greek Wedding”. The first one was that anyone and everyone is invited. Well, not at this wedding. I’d heard along the grapevine that the bride was very insistent about the reception venue she wanted. As the place could only accommodate 140 guests, she insisted the guest lists were cut. I can’t say I blame her for being insistent though, because that venue was incredible. But more about that in My Big Fat Greek Wedding 2.

What? Is that a groan I hear? There are two movies with the same title, so why not two blogs?

Jokes aside, I had planned to do this all in one blog, but as you can see, there’s just far too much to tell you.

So next time, we’ll get to the fun part—eating, dancing, and of course, breaking plates (all Greek style)—and I can’t wait!